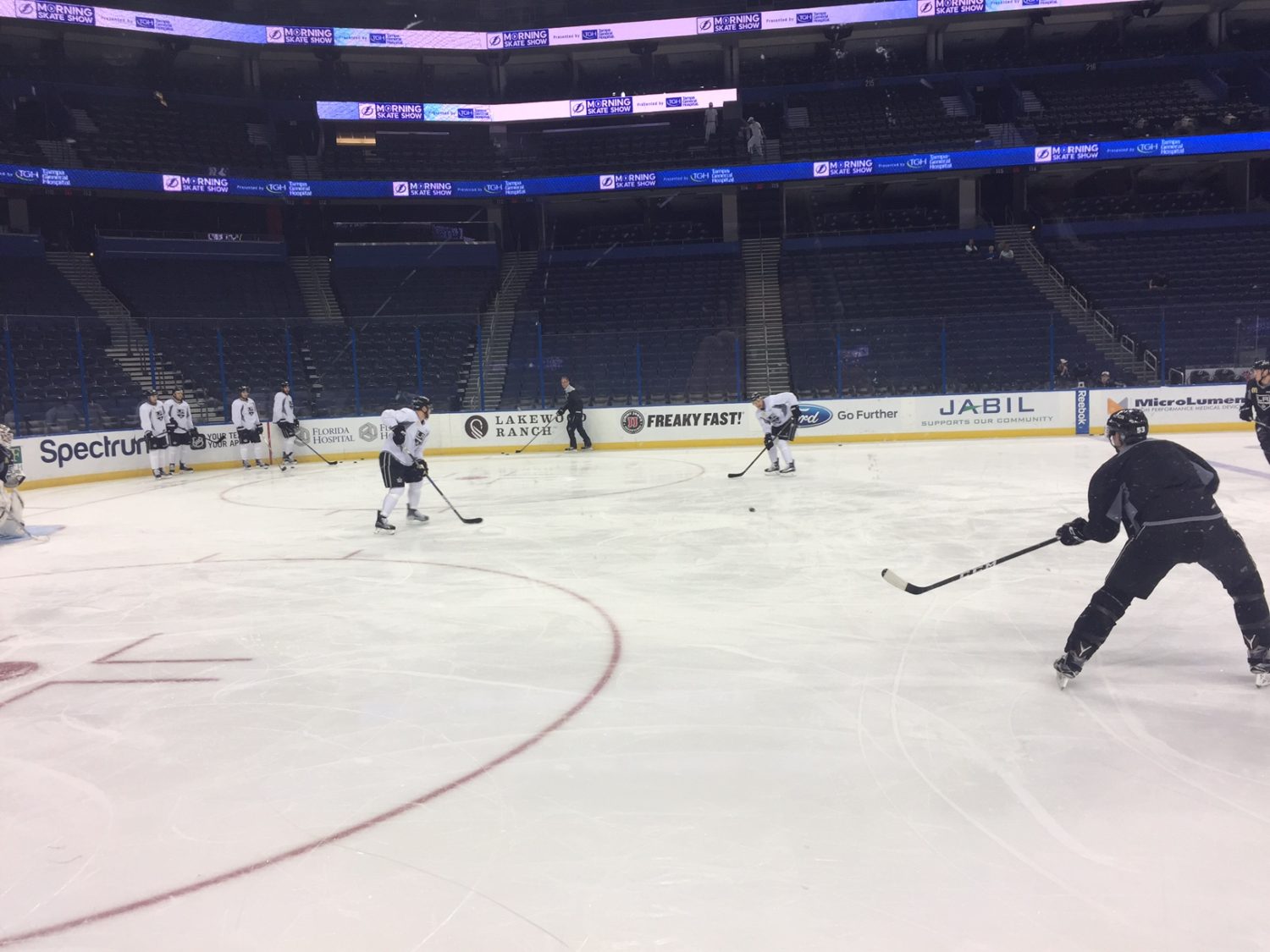 Good afternoon from Tampa, Insiders. The Kings took the ice at 11:30 a.m. for an optional morning skate at Amalie Arena, and while there were no line rushes held, there were hints at changes to the lineup Darryl Sutter will use against the Tampa Bay Lightning tonight (4:30 p.m. / NBCSN / KABC 790 / I Heart Radio).

-Paul LaDue, step on up. The right-shot defenseman is expected to make his NHL debut in the same arena as the one in which he celebrated an NCAA championship with the University of North Dakota last spring. He pointed to Kyle Clifford’s nearby stall in the dressing room as the stall in which he used during NoDak’s trip to the Frozen Four. There will likely be butterflies – all players have them in their NHL debuts – but he knows what to do once the puck drops. “Just go out there and play,” he said. “Try not to think of everything, and in the end it’s just another hockey game. I’ve played a million of these, so you’ve just got to prepare like it’s any other game and go out there and play the way I know I can.” The Kings recalled LaDue in order to have a right-handed option on the roster with Matt Greene’s injury and having placed Tom Gilbert on waivers before assigning him to AHL-Ontario. In 36 games with the Reign, the Grand Forks, N.D. native has has six goals, 18 points, an even rating and 76 shots on goal.

-Peter Budaj was the first goaltender off the ice and is expected to draw the start against the Lightning. Kevin Gravel and Devin Setoguchi remained on for extra work with Jeff Zatkoff and Jonathan Quick, so Gravel is likely to come out for LaDue, and Andreoff could replace Setoguchi in the lineup.

-Tampa Bay hasn’t won back-to-back games since prior to the Christmas break but played one of their strongest games of the season in a 3-2 shootout win over Anaheim on Saturday. There was no official word on lineup changes after the Lightning’s optional skate, but Tampa Bay Times writer and fellow Michigan grad Joe Smith reported forward Ondrej Palat “would appear doubtful.” Smith, as well as several others close to Tampa Bay have been impressed by the play of 22-year-old defenseman Jake Dotchin, who has appeared in six NHL games after 155 AHL games and stands 6-foot-3 and weighs 210 pounds. The Bolts are last in the East and seven points out of the second Wild Card with seven teams to leapfrog, an unfamiliar spot for the team that won the Eastern Conference in 2015. Said Cooper on the team’s resiliency on Saturday, as reported by Smith, “The big thing for me was, ‘Which way are we going to go? Were we going to let another one slip away? Or are we going to dig our heels in and win a hockey game? That’s what they did, it’s a positive sign for us. Hope we can keep that going.” Ryan Callahan (lower-body) and Steven Stamkos (lateral meniscus tear) remain out, though the latter was spotted at the rink Tuesday morning.

-I spoke with Darryl Sutter yesterday and didn’t ask for him today, so no quotes will follow. Instead, I’ll have a Tyler Toffoli reflection on his first several games back, as well as the Dustin Brown You Can Play piece that was teased yesterday. Thank you, as always, for reading, Insiders.

Paul LaDue, on potentially making his NHL debut at the same rink where he won a national championship:
It just brings back all the memories. It was such a great time playing here and getting a win in this building, it was something I’ll never forget, so it’s great to be back and it’s kind of funny that I’m playing my, if I do get [into the game], I’m playing my first game where my last college game ended. You know, it’s good, but I’ve got to stay focused on the game and what’s on hand here.

LaDue, on what he remembers about his first NCAA game:
You know, I think it was against Vermont, but it was the first time I played in that building that I grew up watching and definitely had some butterflies going in, but I think after the first couple of shifts that kind of went away and you just start playing hockey again and hopefully that’s what happens tonight here.