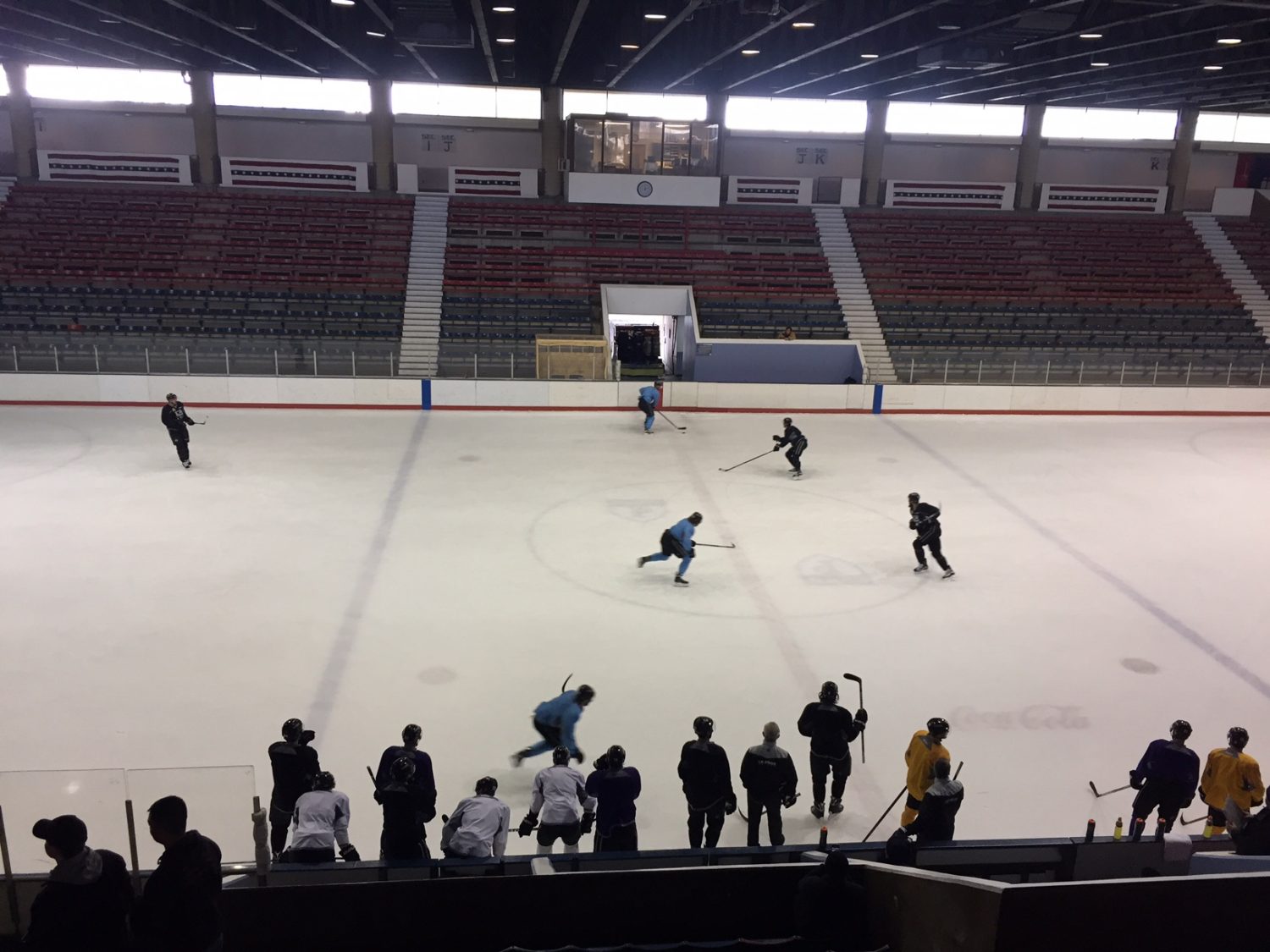 Good afternoon from Philadelphia, where the sun is showing a pretty good compete level in trying to break free from an overcast sky. The Kings practiced on the edge of the University of Pennsylvania campus at the Class of 1923 Arena on Friday and aligned as such:

-Defensive pairings were Muzzin-Doughty, Forbort-Martinez and McNabb-Gravel, so Paul LaDue, who skated as an extra defenseman, may not make his NHL debut against the Flyers. As noted yesterday, Jordan Nolan, who is dealing with a lower-body muscle pull, did not travel at the outset of this four-game trip.

-Jonathan Quick practiced with the team for the second straight day:

Quick left the ice after 20 minutes, eliciting this impish Jim Fox tweet, before returning to continue his work with Bill Ranford. He’s still a ways away from even being considered for a start; expect Peter Budaj to get the nod in Philadelphia.

-Darryl Sutter said that Tyler Toffoli is a game-time decision for tomorrow and that he wanted to get him on a line at practice today. Whether he plays on Saturday or not, his return is imminent. The team has an open spot on the roster and would not have to make any corresponding moves to activate him.

-Because the team practiced on campus at Penn, I asked Darryl Sutter and several players about receiving Ivy League offers. Sutter, as it turns out, was offered by Harvard, Yale and Princeton. “I guess they must’ve thought I was an elite student, because it wasn’t with anything to do with my hockey ability,” he joked. Sutter signed a letter of intent with Michigan Tech after having visited the campus and being taken aback by the atmosphere at the Husky games he attended, but ultimately decided to play with the WHL’s Lethbridge Broncos, where his brothers Brent, Brian, Duane, Rich and Ron also played. More to come on the former student-athletes who now play for the Kings.

-The Flyers, who are coming off a 3-1 win over visiting Montreal on Thursday, are likely to scratch skilled rookie Travis Konecny and dynamic young defenseman Shayne Gostisbehere for the second straight game.

Via Sam Carchidi of the Philadelphia Inquirer:

After Friday’s practice in Voorhees, Flyers coach Dave Hakstol was asked if he sat the two players because he wanted a more grind-it-out approach by inserting defenseman Nick Schultz and winger Dale Weise.

“I can simplify it probably a little bit more – it’s about winning hockey games,” he said. “We’re in the middle of a playoff battle here. We hope it’s going to be a long battle because we think it’s going to go right down to the wire. It’s just about a roster and a lineup that gives us the best opportunity to win.”

Defenseman Michael Del Zotto is day-to-day for Philadelphia and unlikely to play, while Michal Neuvirth is expected to draw the start in net.

More to come on the eve of back-to-back road matinees, Insiders. Stay tuned.

Signing autographs after a practice at the University of Pennsylvania