Quick practices in full gear, representing a step forward in his recovery 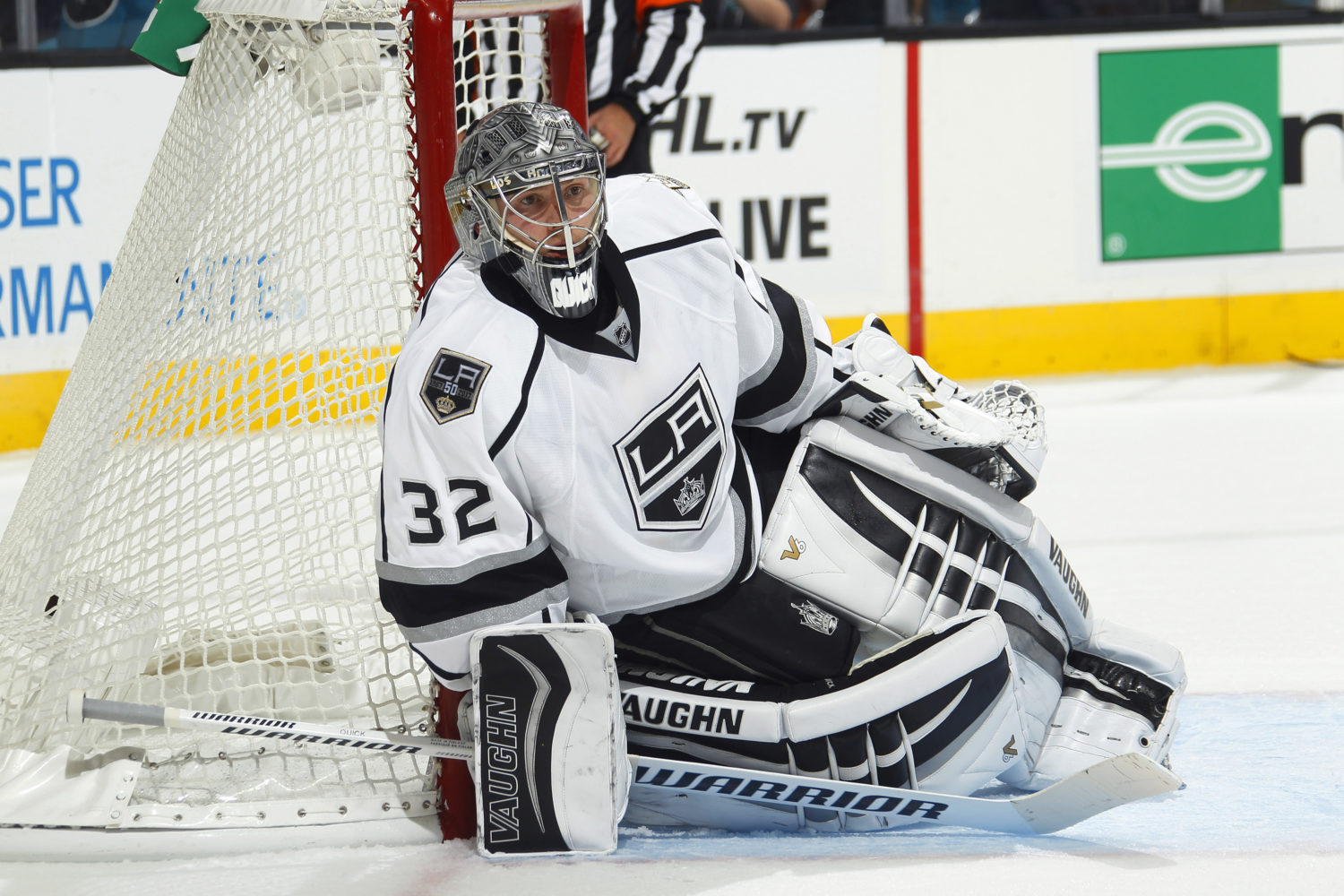 After having tested his injury with light skates in recent days, Jonathan Quick returned to the ice in full gear and practiced with his teammates for the first time since suffering a groin injury 19 and a half minutes into the season opener at San Jose on October 12.

“I knew the feeling was a little bit different than the original [November, 2013 groin injury],” Quick said. “You play goalie for as long as we have, you feel tweaks and things happen all the time, so this one felt a little more significant, but at the same time it was towards the end of the period, so I was kind of hoping that I could get in there and it’ll kind of recover on its own during the course of the intermission and I could go back out there, but once I got checked out we knew right away that I wasn’t playing that night.”

There is still no firm timetable on his return. There isn’t even an acceleration of any sort of schedule of when he may return. But this step represents progress in the all-world goalie’s attempts to rejoin his teammates during their second half playoff push.

“Very lucky I had good doctors, trainers,” Quick said. “Everybody kind of put together a good program, so you look at it now and it’s three and a half, four months later, but it’s like every two weeks you have something that you’re hoping you’re able to do and you just stick to the program and you’re just glad you can get on the ice and break a sweat, feel some pucks.”

While meeting with LA Kings Insider and the LA Times in Buffalo in mid-December, Dean Lombardi originally offered an early March target of when Quick could return before clarifying his remark and intending that mid-February was the most likely target. (Lombardi later told Helene Elliott that he was thinking about the trade deadline in early March and had misspoken; I don’t believe he was being disingenuous, given the nebulous nature of long-term injuries and how players react, and I had heard mid-February as a loose target of when he could return from other members of the team’s hockey operations.)

In Newark last week, though, Lombardi noted that the timeline for Quick’s potential return was early March at the earliest. In any case, this isn’t any great divide, and there have been no setbacks; as noted above, it’s difficult to project an exact date months in advance.

for what it’s worth, Wednesday was the 16-week anniversary of the date of the injury. It should also be noted that facing some shots in an optional practice is much different from more structured or in-game situations in which he’s receiving contact, exploding out of the crease and playing pucks behind his net. But never mind that! Quick saw some shots from a limited group of skaters in the practice before he was joined by Bill Ranford at the other end of the rink from where most of the action was taking place and continued to face light shots and work on his movement. All in all, he was on the ice for just over 30 minutes and stretched thoroughly after each drill or session.

He’s traveling with the team to the east coast but isn’t going to play in the games against Philadelphia, Washington, Tampa Bay or Florida. Instead, he’ll be around his teammates, he’ll skate in full gear and he’ll continue to receive treatment and evaluation as he looks to return at some time in the coming weeks.

Having returned from a long-term groin injury before, Quick is cognizant of certain steps that will be necessary to take in his recovery.

Because the trip encompasses Super Bowl Sunday, Quick will be able to watch the big game amidst the camaraderie of his teammates.

“I’m a Giants fan, so I’ve got no problem with the Patriots. I think Tom Brady’s awesome, especially having my team being able to win two Super Bowls against them, so I don’t mind if they win another one,” he said.

“It’ll be a great game. Two great teams. Kind of easier to root for Atlanta with Matty Ryan and how well they’ve played and you see how hard he’s worked. At the same time, Brady’s probably the best of all time so it’s pretty cool any time you get a chance to watch him play in a game like that, so we’ll enjoy it. I think we’re all going to watch it together and have a good time.”

Jonathan Quick, on how difficult it has been to miss the majority of the season:
I mean, yeah it’s tough, you want to play, you know? But you’ve just got to do what you have to do. You’ve got your program, you stick with it and luckily there’s no setbacks and you’re able to just kind of stick to the schedule the whole way along, and now I get to skate.

Quick, on the team’s goaltending in his absence:
Yeah, they’ve been great. Giving our team a chance to win every night and we’re in the mix, we’re in the playoff mix, so it’s, what, we’ve got like 30 games left or so? I’d say everyone’s important and just kind of focus winning one at a time.