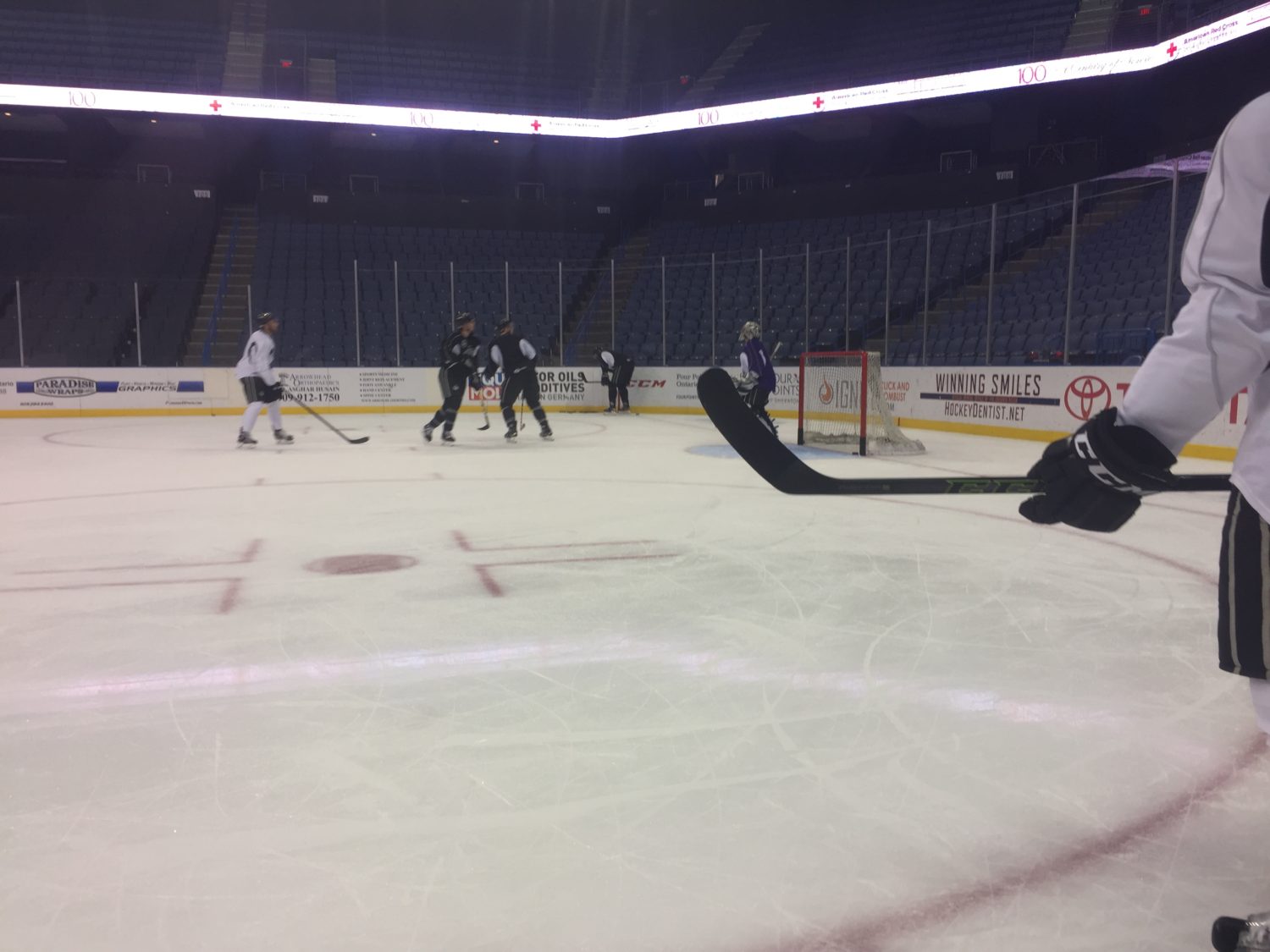 Good morning from a rainy Ontario. The group skated at CBBA at 10 a.m. and here’s a few notes from it.

–Goalie Jack Campbell earned a much-deserved rest day after leading the team to wins on back-to-back nights over the weekend against San Jose and San Diego. He watched the first bit of practice from the stands as goaltending coach Dusty Imoo manned the net in his place alongside his backup Jack Flinn. Campbell, who leads the AHL with 18 wins, will make his 22nd straight start on Wednesday when Ontario hosts Bakersfield. That will tied Peter Budaj’s ironman streak established a season ago. “Well I didn’t realize it was 21,” head coach Mike Stothers said after practice. “I knew it had been a while. It was a pretty busy schedule and he’s seen a lot of activity so just figured give him today, give him tomorrow and he’ll get back in there on Wednesday.”

–Paul Bissonnette skated with the group for the first time as he’s looking to return from a lower-body injury, but it appears he’s still a ways away. “He’s skated the last couple of days, after, on his own,” Stothers said. “Basically he was probably supposed to skate by himself today too but sometimes it’s just nice to have that goofball on the ice with ya for the players and levity. He just provides a little bit of comic relief for everybody. His presence is welcome in the locker room and on the ice.” Bissonnette donned a red no-contact jersey and stayed on for extra skating work as trainer Mike Muir observed from the bench. “I don’t know,” Stothers said when asked how close Bissonnette is, adding that, “he’s got a lot of limitations, but the fact that he’s able to skate is good.”

Bissonnette back on the ice with the group. pic.twitter.com/zcBT8WIXfM

“I miss that,” Bissonnette said about being around his teammates again. “That’s what I like most about the game is the camaraderie. It was fun, especially when the team’s doing well and the boys are playing well. Everyone’s in a good mood and that definitely helps it.”

Bissonnette’s been working out mostly on his own so finally putting his skates on again has been a relief.

“You get a little sick of the gym and just throwing weights around,” Bissonnette said. “Just makes for long days. … Going out on the ice is nice because you get to see the results.”

Both Stothers and Bissonnette hinted that after the All-Star break would be more likely to see him return.

“I don’t see a reason to rush it,” said Bissonnette, who gave credit to Daniel Ciampini for how he’s fit in: “Why rush one of those guys out of the lineup if that was the case.”

–All-Stars Jonny Brodzinski and Vincent LoVerde were both given rest days considering their busy stretch ahead. They’ll have to travel to Lehigh Valley from the team’s games in San Antonio over the weekend. “With the upcoming break, the All-Star break, they’re not going to get the same type of break,” Stothers said. “When you look at them, they’re going to play Wednesday, Friday, Saturday, Sunday skills, Monday game. You can say whatever you want about the skills or the 3-on-3 format, it’s still a matter of getting your equipment on, going out and performing and the travel too.”

–Defenseman Rob Scuderi did not practice and was scratched on both Saturday and Sunday. When asked to provide an update on him, Stothers deferred and instead talked about the addition of Cam Schilling and the call-up of Alexx Privitera.

–Center Andrew Crescenzi did not practice to attend to a personal matter and will be fine to play on Wednesday, Stothers said.

–Ontario will not practice on Tuesday as it will serve as the team’s recovery day this week.

–More to come this week! Due to the busy weekend, the Reign Rewind will go up Tuesday with Reign Director of Hockey Operations Hubie McDonough discussing the Reign’s top players/Kings prospects and an exclusive interview with T.J. Hensick, who picked up his 500th AHL point of the weekend. Wednesday I’ll have a story about how the team’s adjusting to the loss of top left winger Michael Mersch.