Looking to make up ground on the teams above them in the Western Conference standings, the Los Angeles Kings, three points out of a wild card spot but with games in hand on the eight teams directly above them in the standings, kick off a four-game road trip in Brooklyn tonight against a New York Islanders team that won its first game under Interim Head Coach Doug Weight, who assumed Jack Capuano’s duties after the latter was fired on Tuesday.

The Islanders have found clear success against Western Conference opponents at Barclays Center, going 19-2-3 in inter-league match-ups in the home they relocated to at the start of 2015-16, a record that includes a mark of 7-2-1 this season.

A key to a Kings victory tonight is based in checking, goaltending and responsible play. The Islanders are 16-4-2 when scoring three times, and 1-13-6 in games in which they’re limited to two goals or fewer.

“You definitely want to be physical on him,” said Jake Muzzin, Tavares’ teammate with Canada at the World Cup of Hockey. “Take away time and space like a lot of the other top guys in the league. You know, he’s a strong guy, good hands, good around the net, so we’ve got to box out early and keep him away from the net.”

The Islanders, though, have impressive depth in their scoring, and despite the departure of Matt Martin, still boast one of the league’s most effective fourth lines. 18 of the 21 skaters on their active roster have already reached double-digits in points, secondary scoring influenced heavily by a productive defensive corps. Though it will be without Boychuk and Hamonic, New York defensemen rank second in the league with 26 goals from defensemen, who have recorded a goal in 22 of the last 36 games.

Tanner Pearson noted that the wingers’ ability to take away time and space from the opposing point men will be “a big thing” in countering a productive blue line, which Darryl Sutter noted receives good production from the left side in Nick Leddy (21 points), Calvin de Haan (10 points) and Thomas Hickey (11 points).

“You know, getting in the way of shooting lanes and making them make other plays than putting the pucks on net [is our role as wingers], so just limit that and we should be good,” Pearson said.

The Islanders will turn to former Los Angeles farmhand J-F Berube, who is expected to make his ninth career start in net. Berube’s last appearance for the L.A. organization was Game 3 of the 2015 Calder Cup Final, when he sustained an ankle injury with the Manchester Monarchs and didn’t return to the ice until he skated the Calder Cup around Utica Memorial Auditorium. The easy-going goaltender was a very popular figure among those he spent time with in Ontario and Manchester, a group that includes a majority of current Kings in Alec Martinez, Trevor Lewis, Dwight King, Jake Muzzin, Jeff Zatkoff, Devin Setoguchi, Kyle Clifford, Tyler Toffoli, Tanner Pearson, Andy Andreoff, Derek Forbort, Nick Shore, Brayden McNabb, Nic Dowd and Kevin Gravel.

“He was always relaxed, especially in net,” Shore said. “He gave the guys a lot of confidence playing in front of him, and I don’t think you’ll find someone who has anything really bad to say about Rubes. He’s a great guy. I wish him the best, but not tonight.”

Jake Muzzin, on the quality of the Barclays Center ice:
The ice? Oh, no, I didn’t really notice too much difference. Yeah, it was fine.

Muzzin, on what about Tavares’ game that sets him apart:
Like I said, he’s really strong down low. He’s good on his edges. He’s very smart, he knows where to go and he’s got good goal-scoring instincts around the net so you’ve got to play him hard like I said and take away his time and space as best as you can and try to eliminate the rush game because he’s very creative off the rush as well.

Muzzin, on keys to defending against a team that relies on offense from defensemen:
Well, good gaps. I mean, on the rush, like I said, and then it prevents their D from joining. Hitting the late guy. We need good back-pressure from our forwards and have good gaps defensively and then that eliminates the fourth man in the attack and that’s usually a D-man coming in.

Tanner Pearson, on playing against former teammate J.F. Berube:
I think it’s sometimes kind of cool playing against guys you maybe started professional with, ‘cause Berube was, I think he got called up while I was there in Manch, and he did his part and he definitely earned his way to where he is now.

Pearson, on the team’s general outlook at the start of a 4-game road trip:
I think we need wins. We’re out of a playoff spot right now and we need to get back in to that group.

Nick Shore, on playing against Berube and whether the Kings are “just trying to beat him”:
Yeah, I think that’s kind of it. You know maybe you can say there’s an advantage of shooting on someone for a long time or something like that, but he’s a good goalie. The most important thing is the 2 points tonight, though.

Shore, on a center’s responsibility defending against a team that relies on offense from defensemen:
I don’t think we’re going to do anything special. I think if we play the way we can we’re going to give ourselves a really good opportunity to win and that’s kind of regardless of who’s on the other side so stick to the game plan. Get two points. 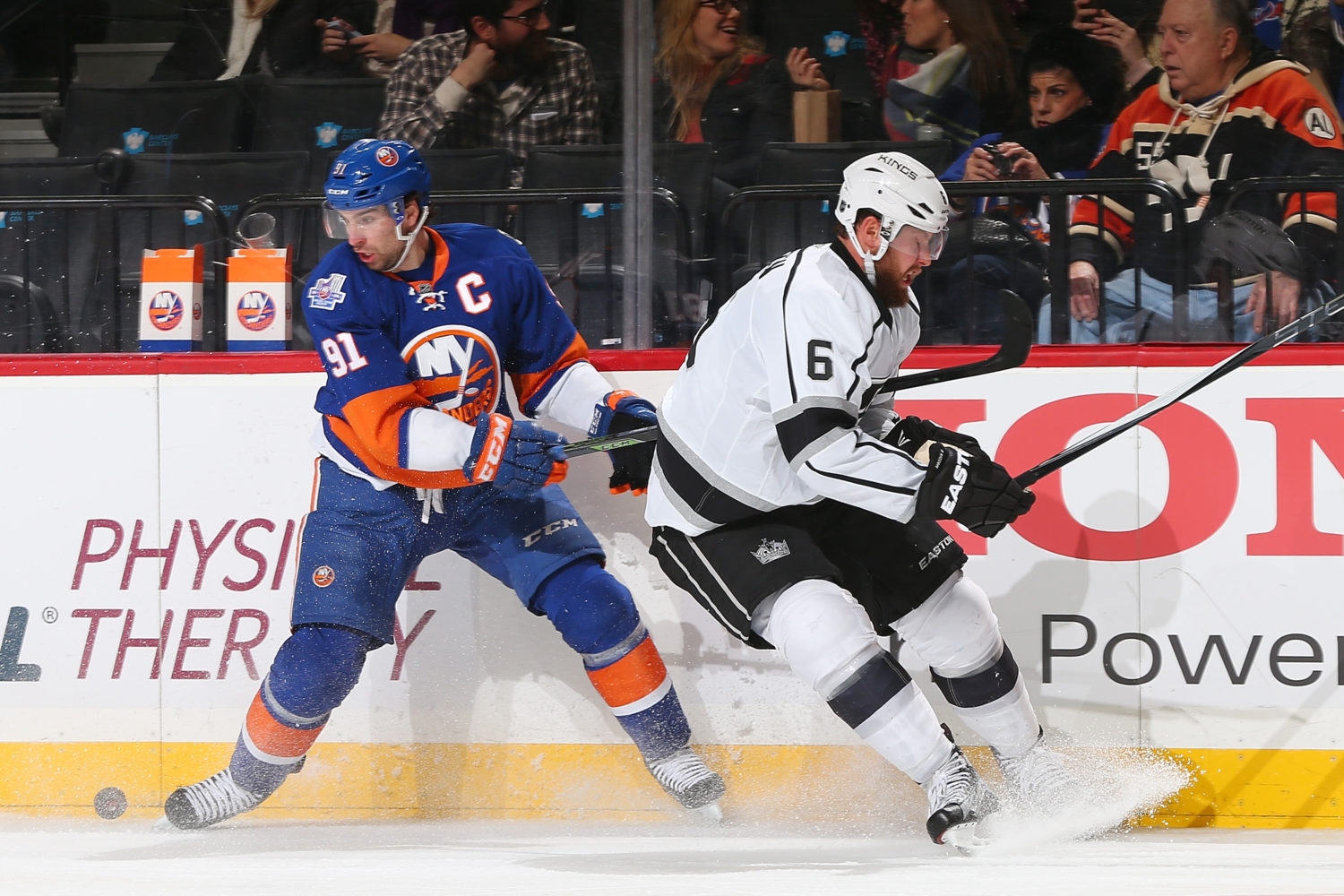