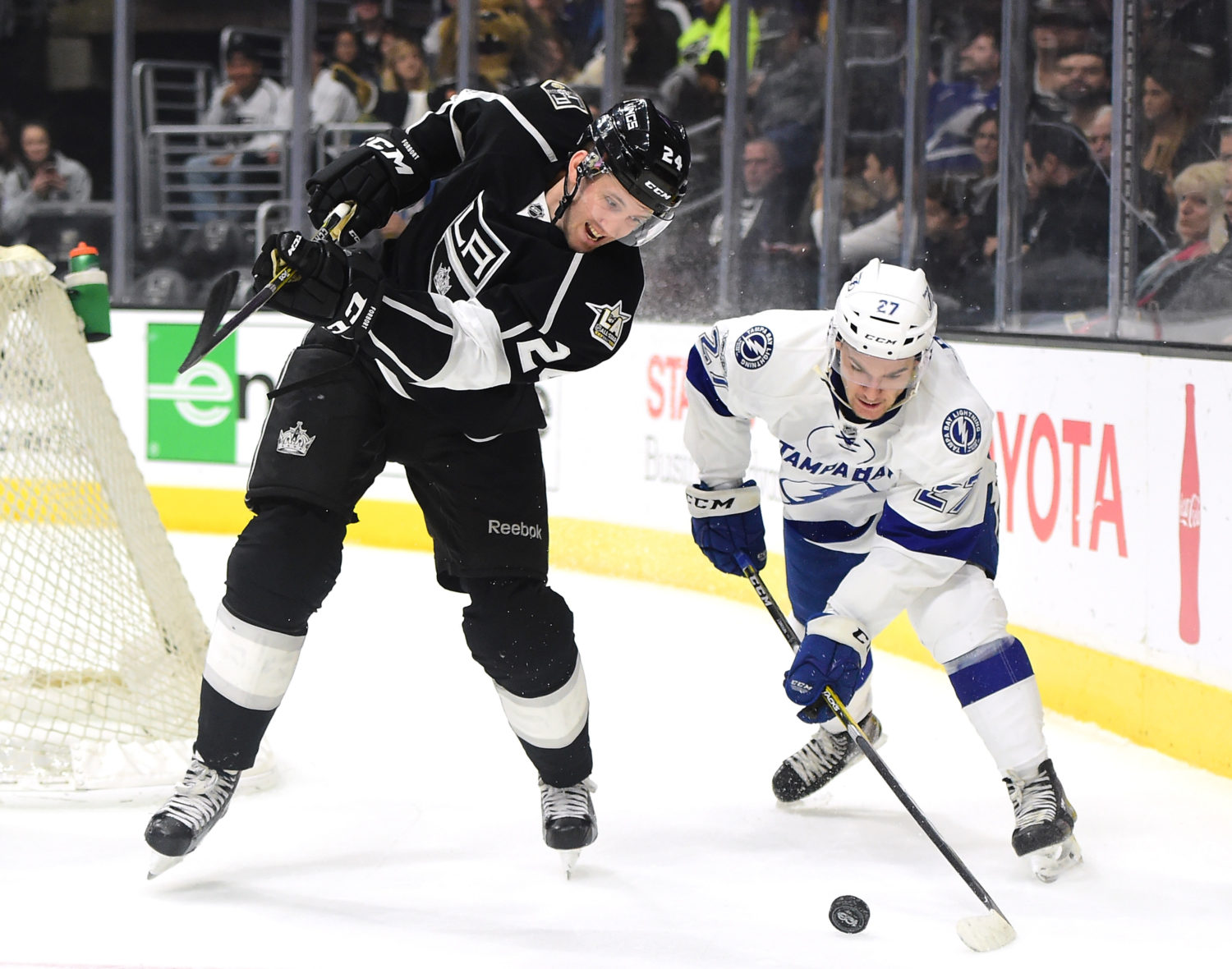 Jon Cooper, on his reaction to finding out Hedman would be a scratch during warmups:
It’s happened so often this year you kind of don’t blink an eye, but that was unfortunate. But then we found out Kopitar wasn’t playing like two minutes after that. Thought ok, well that’s a one-for-one. You know, you don’t want to see — fans pay to see guys like Victor Hedman and Anze Kopitar play so it’s unfortunate they couldn’t but it was still an entertaining hockey game.

Cooper, on the Lightning putting up one of their best defensive performances of the season:
You know what, I’ll be honest. You look, like, what’d we give up? Two against Buffalo, two against Columbus and one against LA. The guys, since we’ve had that four-game losing streak there, they’ve strung together nine straight and I know we didn’t get the result we wanted in Columbus but we thought we deserved points out of that game and we felt like we deserved points out of this game tonight. We were fortunate to get two but the guys are battling hard. It’s all about our net now and again, you look and the powerplay didn’t happen to score tonight but the penalty kill killed off all three of their power plays and when you do that you’re giving yourself a chance to win and that’s the part of playing defense and they were committed to it.

Cooper, on Drouin’s pass that led to Johnson’s first period goal:
Well that’s what elite offensive-minded players can make and Joe is elite in that regard. A lot of good things happen when he’s got the puck on his stick and when you get yourself open there’s a good chance he’s going to be able to find you. He did a great job protecting the puck, he beat his man and now you give him a little bit of open space to make the play and Johnny opened up. The key was not so much he found Johnson, he put it right in Johnson’s wheelhouse and when you’re able to do that, giving guys a chance to score, that’s what Joe did.

Cooper, on having Drouin on the ice during the last minutes of play:
Well you get a feel for your team and you’re going with the guys that are going and it was a tough decision tonight because everybody was going. He’s earned trust with our coaching staff and it’s the same thing with Kuch. Kuch was never out there in the last minute when he first came in and now you find him out there and those guys, I say it for the whole team, every one gamed this one out. They played extremely hard against a big, strong, physical LA team and it was fun to watch.

Tyler Johnson, on his reaction to finding out Hedman would be a scratch during warmups:
Yeah, obviously losing a guy like him’s pretty tough so it’s kind of a shock at the beginning, we didn’t really know what was going on, but hopefully he’s back here.

Johnson, on what he likes about the way the Lightning are playing as a group:
Well I think our last nine periods we’ve done pretty well. We’ve just got to keep playing in our system, keep staying in our structure, believe in what we’re trying to accomplish and everything will start working out like the way they are.

Johnson, on the Lightning looking like they’re playing with urgency:
Well I think we’ve had a lot of urgency the last little while. It’s getting to the time where we really need to get going but it’s a process. It’s not going to turn overnight. It’s going to be every single game and we’re going to need every single point so we’re just focusing on tonight’s game. You said the road trip as a whole is huge but right now it’s every game.

Brian Boyle, on whether Johnson’s goal gave the Lightning energy:
Yeah I don’t know, I mean again, like I said, I thought we played well from start to finish but I mean, forget the pass — the cutback, I don’t know how anyone, I mean, not a lot of guys can do that. It was full speed going one way he turned right out of it, gave himself a ton of separation, and then he’s obviously skilled. He puts it right on the money and good guy to hit with a pass is Johnny.

Boyle, on whether he intentionally shot the puck off Brown and in to the goal:
Oh, yeah. I was behind the goal line, so I wasn’t going to score on a direct shot.

Boyle, on whether this was the type of win the Lightning needed to start the road trip:
Yeah we needed a big win. It’s a big challenge but we needed to respond to the challenge like we did. I think everybody contributed. Everybody put forth quite an effort and sometimes you get a bounce, sometimes you don’t. I think for the last three games we’ve started to play to our habits and make sure that we’re doing the right things structurally. It’s hard to win in this league, but those are the bare minimum things and we’re starting to see that consistently.

Jonathan Drouin, on Bishop’s performance:
That first power play they got in the first period there were shots coming from everywhere, rebounds, and he was huge. Kept us in the game. He’s been doing that for a lot of years now and when Bish is in we have a lot of confidence.

Drouin, on whether his speed was a key factor against LA:
Yeah, they’re a big team. We talked about it, wanting to use our speed and make sure we’re putting pucks in deep and skating at them and forechecking and I thought we did a pretty good job in the first, too. Maybe we let up in the third, they were coming at us a little bit more but overall I thought we were skating well and making plays.

Drouin, on his pass that led to Johnson’s goal in the first period:
Yeah I was just going up the wall, Pearson was kind of on me. Span off him and like I said, they’re playing man-to-man D so somebody got open. Johnny sled back door and there was a lane there and made a play. [Reporter: Not a lot of room there…] Yeah through a stick. I saw a lane through a stick, had to make it quick. They’re a good defensive team so you’ve got that one split-second to make a play and I did.