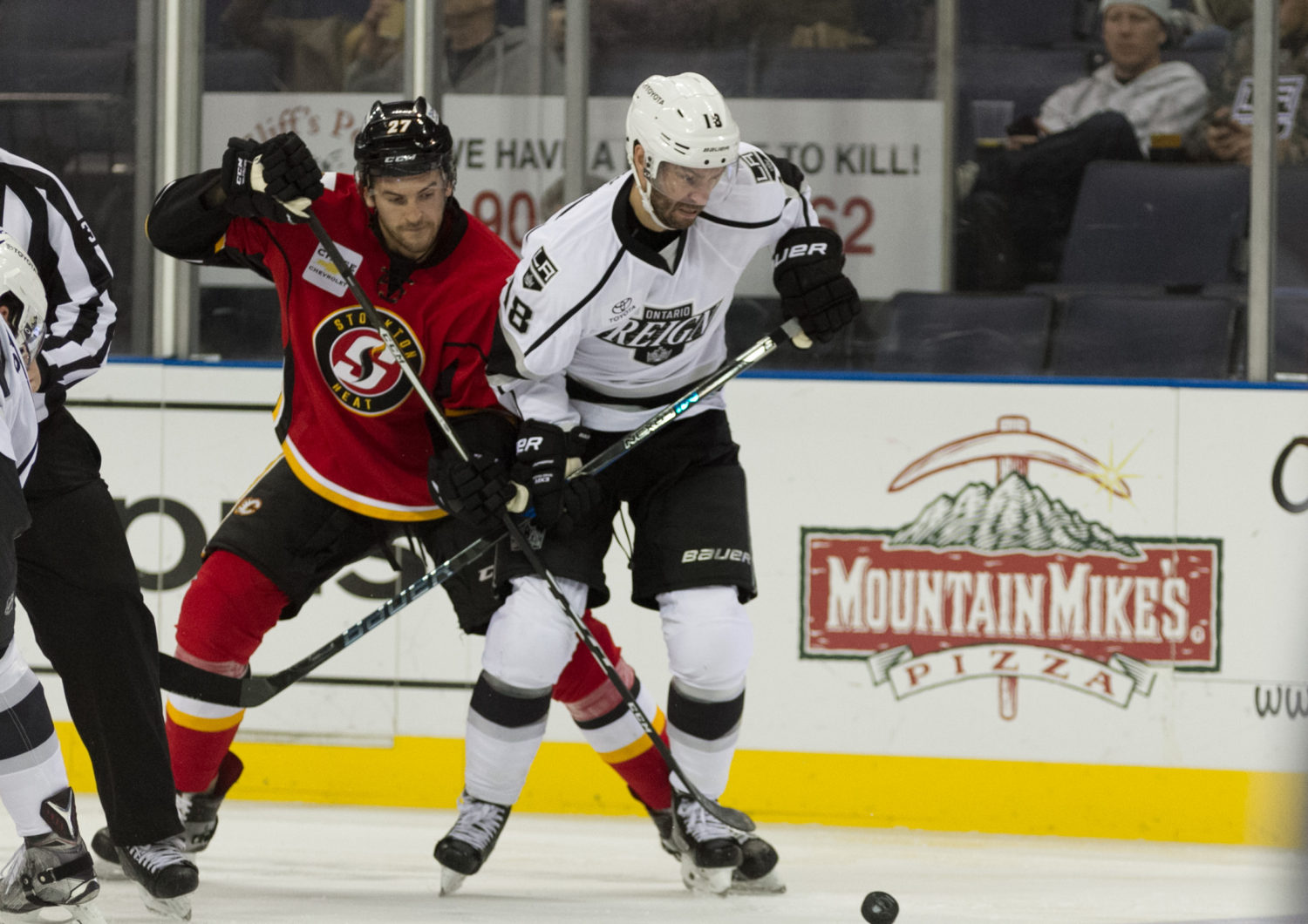 At the calendar turned to 2017 the Reign found themselves in first place in the Pacific Division after a start to the season that wasn’t living up to expectations the team established a season ago.

The turnaround has centered around the arrival and production of one player — veteran forward Teddy Purcell.

Since the 31-year-old was placed on waivers and passed through and was assigned to Ontario by the Kings in early December, the Reign have gone 9-1-2.

In the AHL and in Ontario isn’t where Purcell wants to be but he’s making the most of his stay.

“I’ve definitely had better moments than that. I definitely didn’t expect it, when I went to free agency this summer to be down there before Christmas,” recalled Purcell, who first broke into the NHL in the 2007-08 season with the Kings and was re-acquired by the organization this past offseason. “It’s tough in this business, it happens fast. It can change quick, for good, and bad. But from learning from guys that I’ve seen play and played with and just what I’ve learned, too.

“If you go down with a bad attitude this hockey world is small and that travels fast. You go down with a good attitude, do the best you can, try to help the team win, it’s only going to help yourself out. So that’s the mindset I’ve been in. You look around the world, there could be a lot less fortunate things to be doing so I still feel very luckily and I’m just trying to enjoy my time and hopefully get back up soon.”

Purcell’s immediate impact came in the form of him scoring a breakaway in overtime in his first game on Dec. 7 against Tucson. He’s been a point per game player from there, registering 14 points in 12 games (4 goals, 10 assists). It’s been a chance to bring life to his game after finding points tough to come by (0 goals, 2 assists) in 12 games with the Kings earlier this season.

“I don’t think you can put enough importance on what Teddy’s brought to our team,” head coach Mike Stothers said. “Here’s a guy that’s had a real solid NHL career and he comes down and you might think maybe he’s just gonna go through the motions but he’s brought a real energy to our team. He’s a real character, funny guy. He’s really embraced himself with his teammates.

“And you can see his skill level. He’s too good for this league and maybe this is what he needs to get back up to the NHL but it’s almost like he’s a tweener. He’s too good for the American League, maybe he’s getting a little longer in the tooth in the NHL, I don’t know. But what he’s brought, it’s what everybody’s looking for. It’s a skill set. The way he hangs onto pucks. The way he makes plays. And, the thing again I go to is he’s been real good with everybody and he’s fit in real nicely. I don’t think as good as other guys have played and as good as maybe the record has been as of late, a lot of it is because of what Teddy’s brought to us.”

Purcell’s arrival has also coincided with the resurgence of linemate Michael Mersch, who has four goals and three assists in his last seven games. The top line of Mersch, Purcell and center T.J. Hensick has found instant chemistry.

“He’s a big part of the reason we’ve gone of this streak here,” Mersch said. “When you get an older guy who’s coming down you never know how things are gonna go, if he’s gonna be upset or how to approach it so you just wait. Teddy’s been a really good teammate and he’s been a leader. Especially for us younger guys or whoever. You really look at the way he practices, the way he approaches the game and I don’t know if it gives a calming effect but you’re just a little more settled with everything. That’s the way I feel at least. And you know he’s going to make good plays out there.”

It’s also been a different time for Purcell, who admitted he isn’t quite used to having the role be reversed where he’s now being looked up to by his teammates and being a role model. For him, it was Stanley Cup winner Jon Klemm and goalie Dan Cloutier during the 2007-08 season with Manchester who he had the chance to learn from.

“I was coming out of college and never played a full schedule and I was getting yelled at a lot in pro that I was in junior and college hockey. … Just learning the ins and the outs of it and not really talking a whole lot until I was spoken to and just gaining their trust and gaining their friendship. I’ll always remember those days,” he said.

“When I came down I think being able to contribute right away that makes me feel that I’m helping them out,” he said. “I know when I was in the AHL and a guy that’s been in the NHL [comes down] those guys try to learn from them. I’m not a big talker and stuff but it’s just the little things that they ask you questions. They’re very inquisitive and want to know little things. That’s a fun thing for me, too, because in the NHL I’m kind of always the guy that’s looking up to other guys and been fortunate to play with a lot of good players. It’s a different position for me but … they want to learn and they’ve got a good attitude about them. There’s a reason why they’ve been having success the past couple years.”

The truth of the matter is that this gift of Purcell, who’s on-ice talent makes him a man amongst boys in this league, may certainly have an expiration date, but for now the Reign will embrace it for as long as they can.

“If you look at it, he’s been involved in some way shape or form either on the scoresheet or maybe that third assist or if there was a play made earlier and maybe he didn’t actually get a point on it, the play was made because of him,” Stothers said. “I know Teddy wants to get back in the NHL and we certainly hope that he can and do so in rapid fashion but we’re enjoying his presence right now.”

Purcell, on how much fun he’s having with the Reign:
It’s good. I think when you’re in situation that’s not totally ideal, I think everyone obviously wants to be in the NHL, what you can control is your attitude and have a good attitude. Not feel sorry for yourself. Work your way out of it. I’m always a big believer of good things happen to people who work hard so I’m trying to have fun and this group’s an easy group to have fun around. The coaching staff is great, the players are a fun bunch of young kids and obviously any time you win. I told ’em it might be a little different if we were 1-10 instead of 10-1 in the last little bit but all those things contribute to it.

Purcell, on the success of his line with Mersch and Hensick:
Merschy, he probably doesn’t get as much credit but he does all the dirty work and he’s really strong down low on pucks and T.J. and I are creative guys who like to hang onto the puck a little bit and get open and Merschy goes to the net and he draws a lot of coverage. That’s because he’s had success in this league at this level. He causes a lot of havoc in front so he draws attention and that opens up space for us. We’re clicking on the power play too so I think when you see success there it translates over to your 5-on-5 game. It’s been nice to play with them. They’re a couple older guys, been kind of all over the place since I’ve been down here, and it’s fun. There’s a lot of great guys to play with but for whatever reason the past four or five games … I think you get lucky a little bit too. Doing a lot of the same things but you get a lucky bounce here and then you generate, you pick up confidence from that. We’re just rolling with it right now and hopefully this streak lasts longer than it doesn’t.

Stothers, on what Purcell brings to the bench during games:
I don’t know if he’s a real X’s and O’s and helping guys in that regard but he’s got a calm demeanor that nothing seems to bother him and he doesn’t let it effect his linemates or his teammates. He’s been through the ups and downs of the excitement of being an NHL regular and being in the minors. Just those things. Just stay level-headed, stay focused on the job at hand and not take yourself too seriously. Great sense of humor on him and he doesn’t take himself too seriously. He creates an environment, it’s kind of like [Paul Bissonnette], it’s just something you need. A guy like those guys are great in practice, provide some levity and some energy in practice. But I just think that that skillset is just so vital in today’s game and the way you want to play.

Mersch, on what Purcell is like on the bench:
He’s pretty laid back. When you play with a guy that good you don’t really need to talk [on the bench] because you know where he is. He talks well on the ice, so there’s not really anything to talk about on the bench. If there ever is, he’s not afraid to speak up. We’ve all got good relationships on this team and he’s really bought into the systems here and I know he’s penalty killing now so that’s probably something new for him this year. He’s doing a real good job of that so I’m sure it’s fun for that too to get that type of opportunity to do that type of stuff and get better.

The Reign played through a massive downpour of rain in the Outdoor Classic on Saturday in Bakersfield. Ontario actually scored it’s only two goals in a 3-2 overtime loss to the Condors during heavy rain. Lost in the game was the return of Michael Mersch, who missed one game with a lower-body injury, and also the return of reliable centerman Andrew Crescenzi from a lower-body injury after missing seven games. The Reign host Texas on Wednesday in their next contest.

During a conversation with Mersch, discussing ways to tune out distractions that may come with playing outdoors, he turned the discussion to a story from two seasons ago:

“There’s a lot of things that can happen. Especially, the AHL is a league where sometimes like, we had my first year in the middle of the game the fire alarm went off and we were sitting in the loading dock with the other team for a half hour. That type of stuff happens. [Peter Budaj] was the goalie actually on the other team. So it’s just like stuff like that happens and you just go with it, you get over it over with and then you just move on. It’s fine, it gives a good story for us. But that type of stuff happens so we’ll just the play the game. Same way we do, approach everything the same way.”