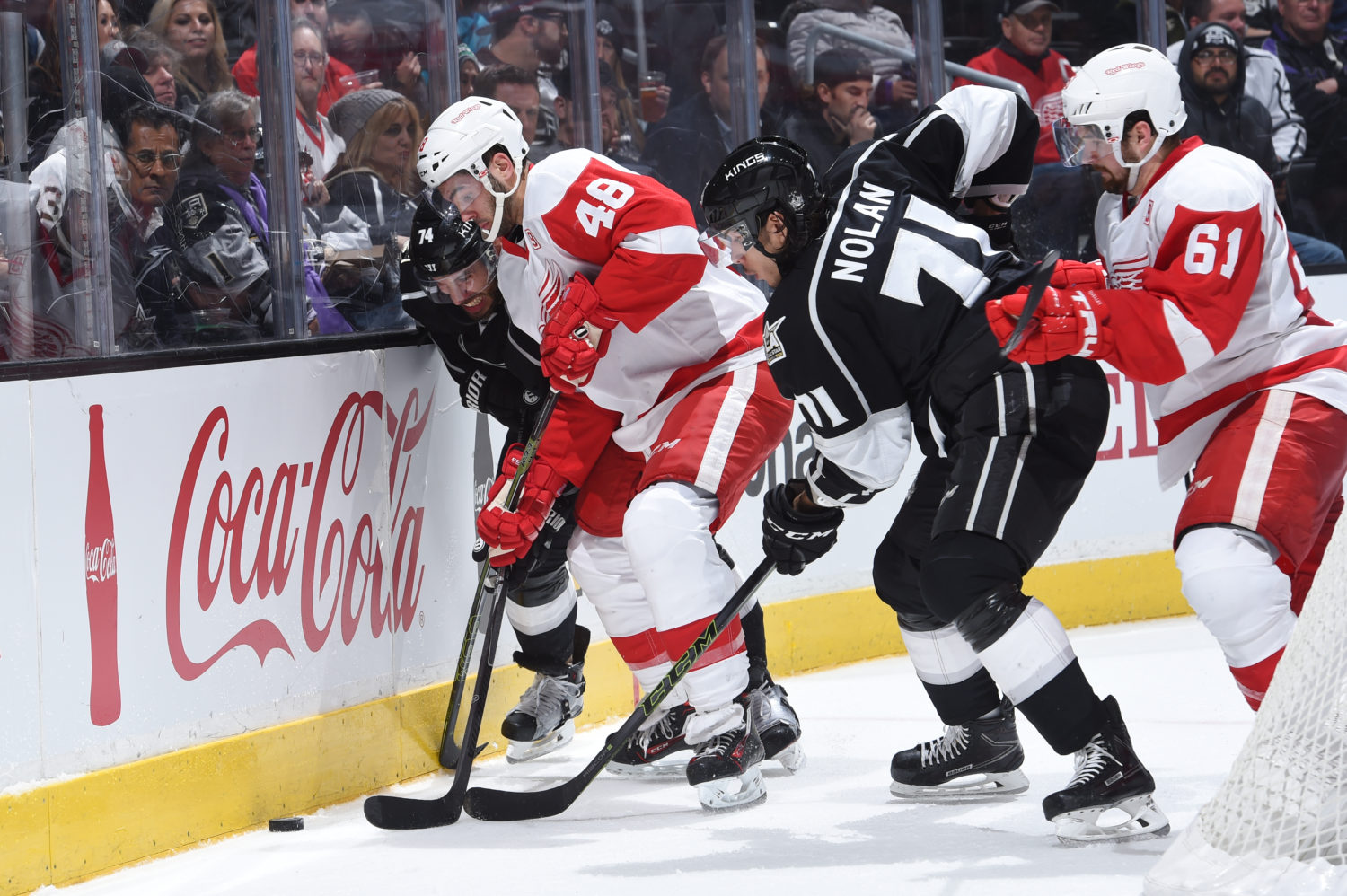 Drew Doughty, on the loss:
We just weren’t winning battles. We were turning pucks over on our backcheck. I know one of the goals was kind of because we turned the puck over, and then on the back check we lost our coverage. The other ones were just down low battles that we lost. Something that we pride ourselves on is winning every little battle, being good in our D-zone and not turning pucks over, and that’s why we lost tonight, because we didn’t [inaudible].

Doughty, on the team’s inability to score:
We’ve got to get more hungry around the net. At the same time, we got a lot of shots, but I think a lot of the times, we were just throwing pucks from bad angles and stuff like that. Some of them weren’t grade-A opportunities, but when you do find those opportunities, we’ve got to bear down and put the puck in the net. It takes determination and hunger to score, and we lacked that tonight.

Doughty, on whether the team will move past this game quickly:
Yeah, we know that we played very poorly. You can’t just put it behind you and not remember the things we did wrong tonight, but at the same time we’ve got to move on and get back to winning games.

Doughty, on the slow start:
Well, a goal on the second shift kind of puts your team down a little bit. We tried to get the bench up and get everyone going, but then we kind of gave up another one right after that, and then a third later. I don’t have a reason for you. We were ready to go before the game, just before we always are. We didn’t come out hard and they did, and they played last night, so that’s on us that we allowed them to do that to us.

Doughty, on not being able to generate a winning streak:
Yeah, it’s not what we want to obviously be doing. We want to be winning games. … We want to put a string of wins together, that’s the bottom line, and when you’re losing two, winning two, you’re never going to make up any ground on the playoff run. Right now I think we’re just barely in it, maybe out after tonight, but we’ve got to get back in there as soon as possible and we need to start winning more hockey games and not just two in a row and then losing two.

Doughty, on wanting to capitalize on the home stand:
Yeah, we obviously love playing at home here in front of our home fans, and we feel comfortable here and we feel like we need to string wins together, so we’re going to start doing that as of the next game.

Doughty, on how to address the team’s consistency:
It just comes down to individually every single player wanting to perform to the best of their ability. When we have even just one or two guys not here ready to perform and ready to compete to the best of their ability, that brings the entire team morale down, and just that one mistake can make the biggest difference, so we need every single player to look at themselves in the mirror and respond. We need everyone to be on their A-game in order to win hockey games, and when we’re not, we lose.

Jordan Nolan, on not being able to generate a winning streak:
Yeah, like I was saying before, I think Carts has been such a big player for us this season. It seems like when just needed to get a goal, and no one else could kind of find one. We were flat tonight. We didn’t come out great, and that was the story all game. Win two, win three, lose two, three, whatever it may be. It’s starting to get a little old and we’re getting to crunch time here, so we’ve got to get some wins.

Jordan Nolan, on the slow start when preparation and approach doesn’t change:
I think it’s just emotion. I mean, I think guys were so excited and so amped up for those two San Jose games, maybe we thought this one would be a little bit easier. We don’t see this team too often. They play a different style, and we came out flat. There’s really no reason for it, just guys didn’t get ready, I guess.

Nolan, on the team’s play (via post-game quote sheet):
Jeff Carter has been carrying this team for us and it seems if he doesn’t get a goal or whatever it may be, no one steps up and fills that void. We have to start picking it up as a team. Boods has been great for us all year. Carts has been great, and we just need more from some other guys. We were flat tonight, we didn’t come out great and that was the story all game. Win two, win three, lose two, lose three, whatever it may be, it’s starting to get a little old. We’re starting to get in to crunch time here, so we have to get some wins.”