If you’re looking for skill-oozing playmaking at high-octane speeds, Dwight King’s probably not your guy.

“We called him up in 2012 not for his goal scoring ability,” Darryl Sutter said.

But King’s skill set, which is defensive in nature and contains subtleties that may not be as visually apparent as a huge Dustin Brown hit on a forecheck or, say, a bar-down Jeff Carter snipe at high speed, works in lockstep with Darryl Sutter’s emphasis on checking and suppressing shots against.

Sutter recalled King’s “checking” during the 2012 Stanley Cup Playoff run that served as a base for his ability to protect narrow leads.

“He played on a line with Jarret Stoll and Trevor Lewis, and it was a checking line that played in the last minute of games, and he’s been an excellent penalty killer his whole career.”

The numbers back up his identification as a strong checker. His 25.02 on-ice shots against per 60 minutes places him third on the Kings and 24th in the NHL, and his career-high average 1:37 of shorthanded time per game on a team that ranks 10th in the league in its penalty killing rate are credentials that allow the coaches to confidently play him against other team’s top players and in dicey moments of close games.

In 60:14 of total shorthanded time, King has been on the ice for a remarkable two goals against.

“I think it comes along with having trust with coaches and just staying on the right side of pucks,” King said. “Obviously at the end of games it’s more about stopping chances than creating, so it’s just something that you mentally prepare for and the more you’re in the situation the more you’re confident with yourself, so it’s been pretty good. Obviously killing with Shorezy is easy because we play together and we read off of each other pretty easily.”

The ability to suppress shots comes from his positioning and all-around defensive awareness, according to Sutter. 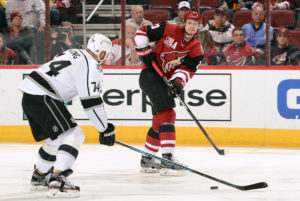 “He has good hockey IQ, he can get his sticks in shooting lanes, take away and think ahead of the next play sort of thing. When he’s on, he’s blocking shots, getting pucks down the ice.”

His production, while an added bonus to his responsible play, has slowed after a quick start. He’s on pace for 22.2 points, which is a touch below a career-high 30 points in 2013-14 and 26 points one season later. It’s more on pace with last season’s 13 points in 47 games.

But while there aren’t any primary stats that indicate his value defensively, the coaches are keen on his ability to get his stick in passing and shooting lanes and reduce the quality of the opponent’s opportunities. He’s also a plus-five in penalty differential during five-on-five play. Many of these defensive metrics are the reason he’s among the top options at Sutter’s disposal when the team is holding a one-goal lead in the final minute of a game.

“I think they’re both probably similar, PK and the last minute, obviously. They’re both outnumbered opportunities so you just … try to angle yourself where everything is more or less to the outside and just help out wherever you can. Obviously there’s an extra guy out there, so you try to just deflect everything.”

Dwight King, on the best defensemen in the Western Conference in getting shots through:
In the West? Well obviously Burns, I think has the most goals. I think for him he doesn’t maybe move as much he just shoots it from anywhere. It’s not like a pull-and-shoot, it’s just like a quick release. Klingberg off Dallas, he’s more of a pull-shoot guy. Who else have we got? There’s the craft, but obviously most of them are power play guys so it’s the guys that are crafty that have the patience I think, obviously the guys who shoot a lot but if it’s a little easier to read than the guys who move the puck while they shoot, they’re a little tougher.