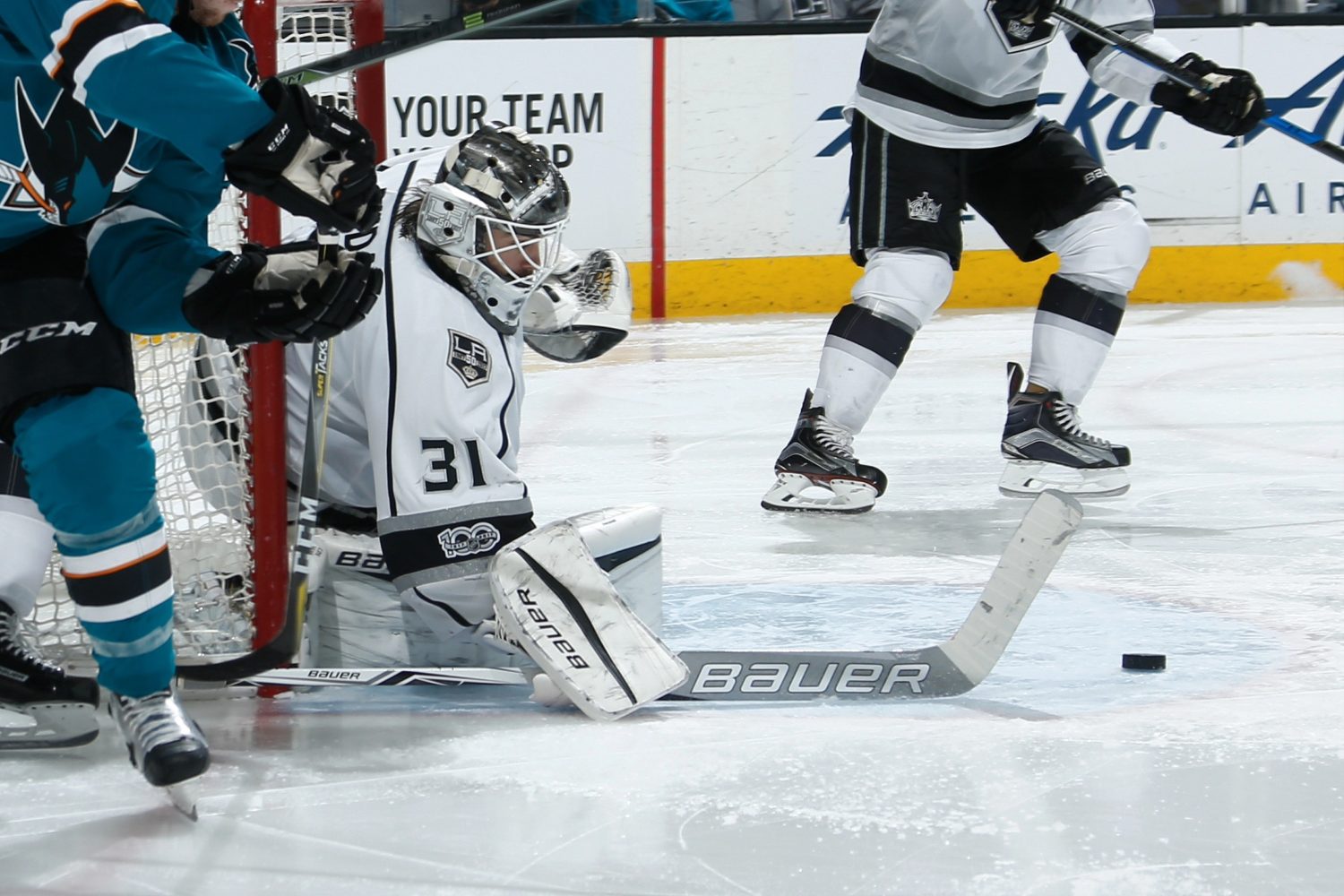 Anze Kopitar, on what led the Kings to the victory against the Sharks:
I think our PK was pretty on point, and then getting that power play goal. Special teams are always huge in tight games like that and then it just came down to making a few plays. Muzz made a nice shot-pass to Carts and then Carts made a nice dish to Tanner so that’s what it takes.

Kopitar, on what the Kings have been doing right in their last two games:
I think we’re getting closer to playing our style of hockey which is going in on the forecheck and just stopping pucks and trying to create, obviously, some zone time and playing there, drawing penalties and that’s what we want to do.

Kopitar, on Gaborik and himself getting more chances in the offensive zone:
Yeah, I mean, that comes with getting in on the forecheck, stopping pucks, and then off that try to create some chances and obviously try to find the back of the net at some point, too.

Jeff Carter, on what he saw before Pearson’s overtime goal:
Yeah you know what I thought, I actually thought Dewey was going to go right up the boards with it when he reversed it so Buds made a great play of just getting out and keeping it going back and I think their guy tried to maybe hit their guy in front of the net, it came right to me and I just kind of waited the D out ’til he kind of turned over his stick and Pears made a great shot.

Carter, on the significance of sweeping the home-and-home series against the Sharks:
It was big games. We know what we’re getting in to when we play them. We have some ground to make up on them and a lot of teams in our division so we really keyed on these games and it’s good to get 4.

Carter, on scoring seven goals in his last seven games:
Yeah it’s been good. [Reporter: Anything in particular working well?] No, just getting lucky.

Carter, on the Kings going 3 for 3 on the PK:
Yeah, it was good. I mean it’s not too often you come in here and you kill them all. You know, win faceoffs, clear pucks, get in shooting lanes and get a big save from Buds and that’s really all it is. We had a really good run on the PK for a while and then we kind of got off-track the last few games so it was nice to really bear down and have a good one. Probably the key to the game.

Carter, on his third period goal:
Great play, I think Kopi coming in, and then Muzz with real patience to kind of just let it open up.

Tanner Pearson, on his game-winning overtime goal:
Yeah, I think once you get possession after being out there, those guys want to change and Kopi came off and I was just coming off I think. Their two players got caught down low and kind of scooted out to Carts and I just kind of hung out by the blue line until Carts crossed the blue line and went down on a 2-on-1 and finished it off.

Pearson, on why he’s had so much success in his career with game-winning overtime goals:
I don’t know. I think, you know, you just want to kind of bear down if you get put in that opportunity you want to not necessarily be the one to finish but definitely help your team to win and the looks I’ve got have obviously gone in so it’s working out.

Pearson, on the significance of sweeping the home-and-home series against the Sharks:
I think that’s a big thing. They got a point tonight but for us to get the two definitely helps us out. To get back in or try to close the gap between us and the other division teams so that was a big win.

Peter Budaj, on the third period:
You try to stay involved the whole time and you know, obviously I think we, I don’t want to take anything away from San Jose, I think we came out really strong and played a really strong two periods. I mean, even in the third I think we played well but I think San Jose picked it up a little bit and we were out-shooting them 2 to 1 in their home building so obviously we knew they were going to come out strong but we were able to match it and it’s a great team win. This is a very tough building to win and they have a very good team and we always have great games against each other so it’s just a great team win. The guys played great in front of me.

Budaj, on the significance of sweeping the home-and-home series against the Sharks:
It’s great. I think we were in a little bit of a slump there before and then we lost in Vancouver, we lost in Edmonton and now we just knew we that we needed to come out and do a little bit better and do what it takes to try to win and it’s a very tough opponent that we play and it’s a good four points for us. I think it’s very good.

Budaj, on his 33rd appearance in 38 games for the Kings:
You know, thank God I’m feeling good. I think I feel strong, I try to get my rest when I’m can and I try to do the little things right so keep my body healthy and thank God I’m healthy and feeling good so I’m very happy that I can play this many games and help the team to win the games and I’m just very excited and I’ll keep working hard and enjoy this moment.