Good afternoon from Pittsburgh International Airport, where we’re probably going to have to deice. The Kings practiced at PPG Paints Arena after an icy commute from the team hotel, and while it was an optional practice, a good contingent of players still donned skates. Because it was an optional, there were no line rushes in advance of tomorrow’s game in Boston (10:00 a.m. PT / FOX Sports West / FOX Sports GO / KABC 790 / I Heart Radio). Pour yourself a cup of coffee and join us for a 9:30 a.m. Kings Live pre-game show.

-Though there were no line rushes, the #LAKingsGoalieTweetOff still applies because tomorrow’s game is a matinee. Peter Budaj was the first goaltender to leave the ice, so expect him to start against Boston.

-Speaking of the Bruins, 19-goal scorer David Pastrnak will not play on Sunday. Via General Manger Don Sweeney: “David underwent a successful removal of the olecranon bursa from his right elbow on Friday, December 16 at Newton Wellesley Hospital by Dr. Matthew Liebman. He will likely be unavailable for the games on Sunday and Tuesday. His condition will be re-assessed on a day-to-day basis.” Riley Nash (personal reasons) and Joe Morrow (maintenance day) did not practice but will be available, according to the club, while Valencia native Kevan Miller, who did not play against Anaheim two nights ago, returned to practice, via CSN’s Joe Haggerty. The Atlantic Division’s third place team, Boston is 16-13-3 on the season but just 7-8-0 at TD Garden.

-Brayden McNabb practiced with the team (as opposed to skating on his own or after practice) for the first time since suffering a broken collarbone in a collision with Colton Parayko during a game in St. Louis on October 29. I spoke with Dean Lombardi last night about McNabb, who joined the Kings on the trip after spending quite a bit of time recently with skating coach and former Olympian Dave Cruikshank. Lombardi said that McNabb was getting close, but after speaking with Darryl Sutter this morning, it’s probably a stretch to expect him to play on this current leg of the trip. The defenseman is not yet cleared for contact, though he’s still on schedule. His surgery was six weeks ago this past Wednesday, according to Sutter. “He’s still a week-to-two weeks,” Sutter said. “Our goal always was Christmas. I talked about trying to circle a date to make him feel like he had a target, so that’s kind of the course he’s on. We thought it was important once he did his last X-ray to get him out here so he can skate with the team. Otherwise he’d lose a whole week here.” By bringing him onto the trip and getting him to skate with the group every day, his conditioning will remain up. I’ll have more from Darryl shortly; it’s not a huge stretch to think that he could be available for the Vancouver-Edmonton back-to-back on December 28 and 29. I’ll also share more on McNabb during tomorrow’s Kings Live pre-game show.

-The Kings are now 18-3 in games decided in overtime since the implementation of three-on-three, and that borders on the absurd. It helps to have players like Anze Kopitar, Drew Doughty and Jeff Carter start overtime, but Los Angeles has also banked on its second unit, which is often comprised of Alec Martinez, Tanner Pearson and Tyler Toffoli. I spoke with Pearson earlier today about the reasons for the team’s success in the extra session:

Tanner Pearson, on finding success with Martinez and Toffoli in overtime:
I don’t know, I think when you’re with any team the key thing is possession and you want to maintain the puck as long as possible, get it back as quick as possible and not waste energy chasing it around. When it’s three-on-three there’s so much room on the ice you get in trouble when you start chasing it, so I think the three of us have done a good job of keeping possession, but moving and creating plays and capitalizing on those, too.

Pearson, on Toffoli’s first career overtime game-winning goal:
That was it? Wow, that’s awesome, I don’t know. I think when the three of us go on the ice we’re comfortable with each other and we all want to get the three points. I don’t think it really matters who gets the goal really as long as we can contribute and do our part, it works out.

Pearson, on Alec Martinez’s overtime success:
I think he’s just a smart defensively player on that group. He has six goals this year, too, so he definitely has the offensive capabilities. I mean, what does he have, one or two OT goals this year? He’s definitely a threat, but he can play on the other side of the puck, too.

Pearson, on last night’s three-on-one:
I think last night with Kessel’s stick breaking that kind of helps about a bit. It creates a quick turnover and a rush attack and you know, I think we were kind of lucky that Ty scored because all three of us were on top of the blue paint there. So if he would have missed the net it probably would have been a breakaway at the other end so kind of all-in or nothing type mentality there.

-Darryl Sutter quotes will follow; there are some fun recollections of a young Martinez, who played minor hockey for the Junior Sharks with his son, Brett. Enjoy your Saturday, Insiders. 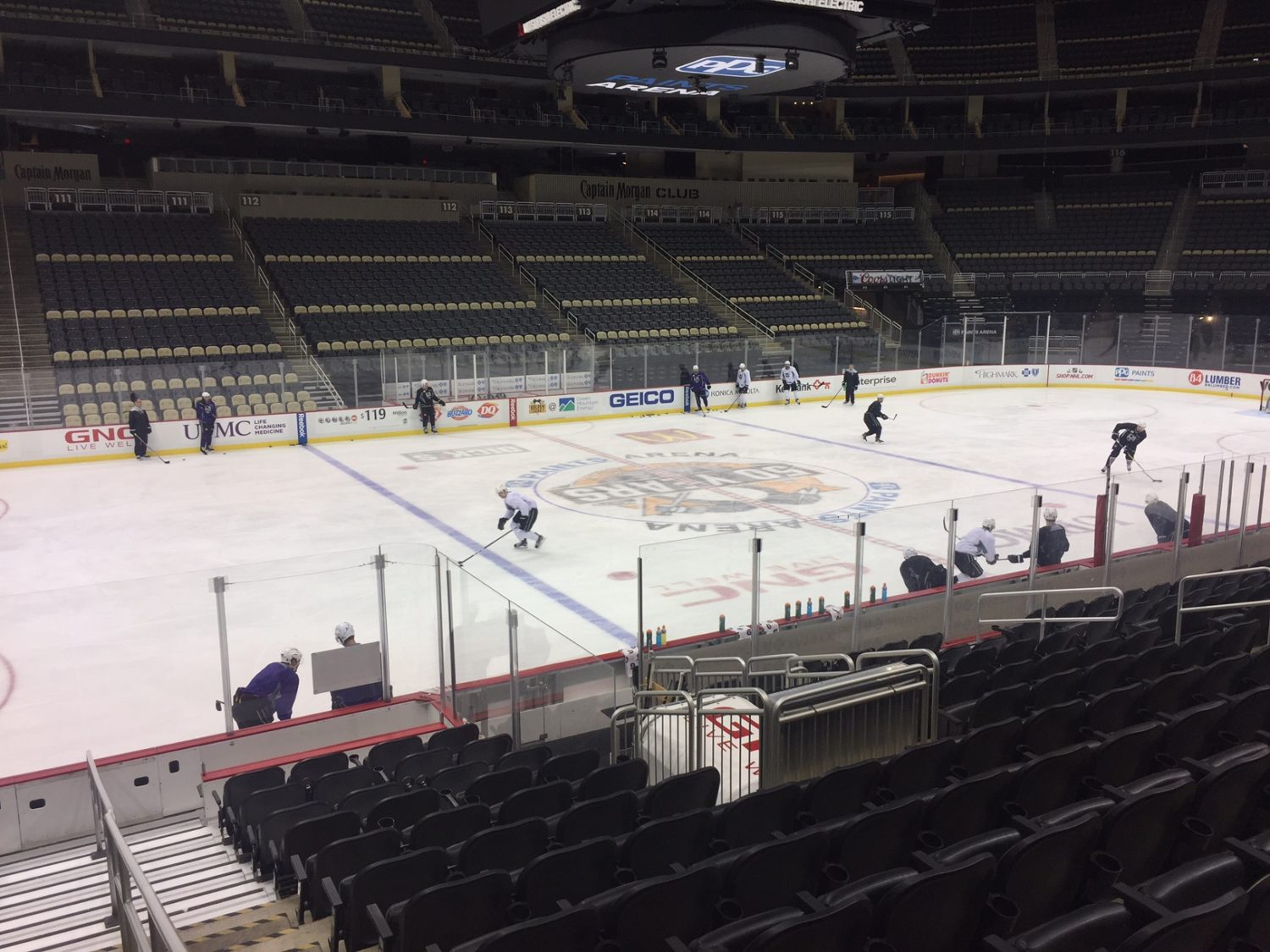