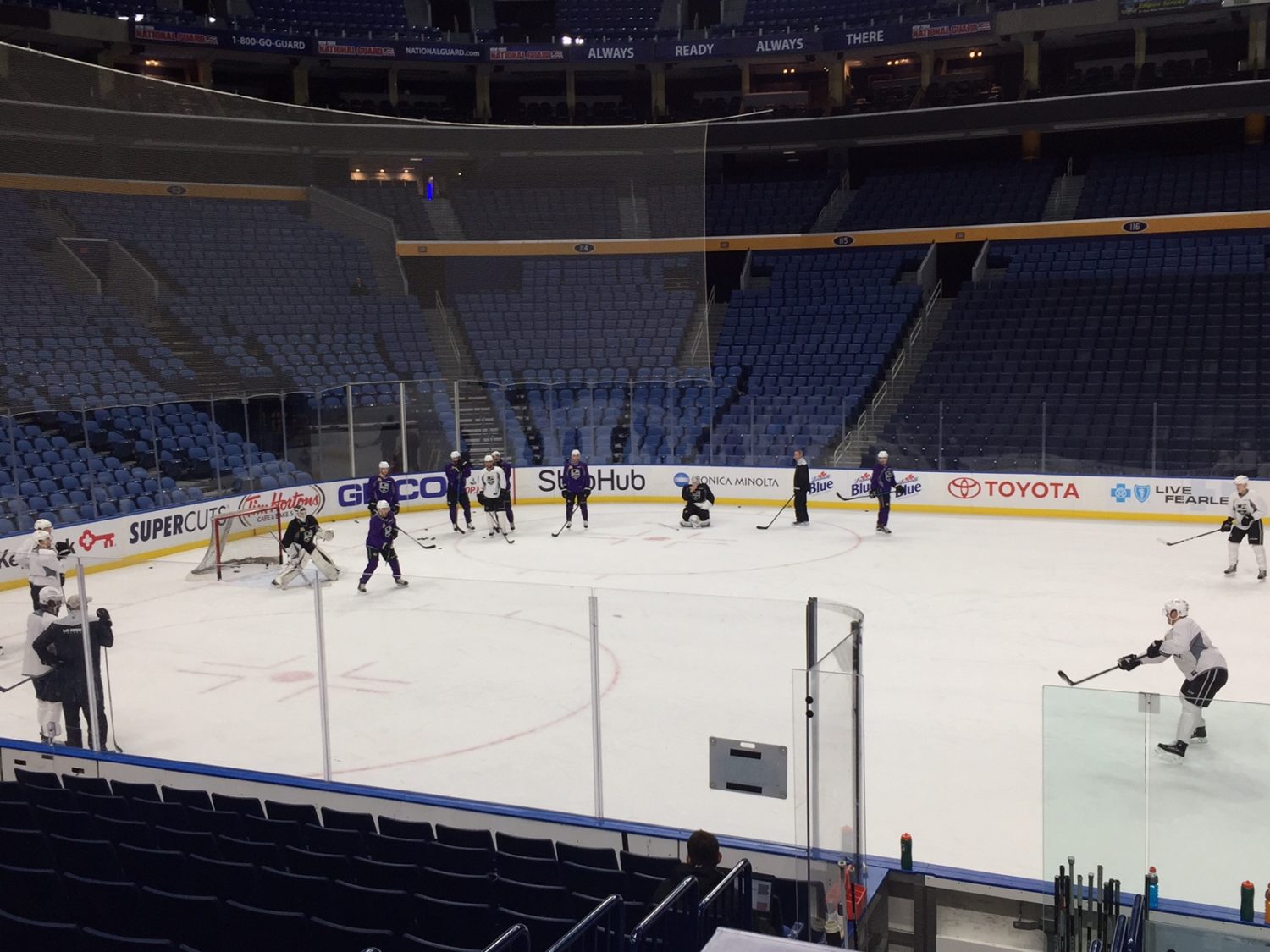 Good afternoon from Buffalo, where the snow is coming down but hopefully shouldn’t delay the team’s short flight to Detroit beyond the need to deice. The Kings practiced at KeyBank Center on Wednesday and amidst power play, penalty killing and skill work aligned as such during rushes:

-The defensive pairings didn’t change; Derek Forbort skated to the left of Drew Doughty, Jake Muzzin to the left of Alec Martinez and Kevin Gravel to the left of Matt Greene, with Tom Gilbert skating as an extra during the brief rushes.

-A bigger story today is that there is now a firmer timeline on Jonathan Quick. He’s expected to be sidelined until mid-February, according to Dean Lombardi, who spoke with LA Times columnist Helene Elliott and me for 15 minutes at the start of practice. Lombardi had originally noted March as a timeline for Quick, but, according to Elliott, had misspoken.

His mind and said March when he meant mid-February for Quick's anticipated return.

That’s pretty much the timeline that had been expected with Quick, but because the update had been shared by the general manager, it comes with a touch more firmness. The timeline came as part of an answer to a question Lombardi was asked about whether it was possible he could make a move for a goaltender.

“Well, I mean the thing was it’s no revelation that as soon as he went down, this isn’t like a thing you just look at yesterday or today, this has been going on as soon as we got word that he was going to be out until [mid-February],” Lombardi said. But if you look at what’s out there … and then I think what happens too is even the teams that have maybe a 1 and a 1-A, they’re looking at it, ‘well, what happens if I lose my guy?’ You’re almost going down to the third man on the depth chart when you’re talking to a lot of these teams and then you also have the issue too, that if you highlight a certain guy, then you’ve got the realization, number one: you’ve got a number one goalie coming back, [and] two: with expansion coming, if he is a top guy you’re going to lose him, so how much are you going to give up for a two-month asset? To be honest with you, there hasn’t even been that type of player in play and now you’re back to, ‘I don’t know, let’s try [Anders] Lindback’ (who the team signed to an AHL PTO). You see Toronto trying to with the guy up there now [Karri Ramo]. It’s like back-up quarterbacks, I guess. I mean, you lose a quarterback and it’s tough.”

-There’s a ton more to come today from Lombardi – who continued to speak about the goaltending market, as well as other topics – Anze Kopitar and Dustin Brown, and, lest we forget, Darryl Sutter’s post-practice quotes. I also spoke with three Michiganders on the team to get their sense of heading to Joe Louis Arena for the final time. But one recurring theme I heard from the players was that today was a “work day.” It was also confirmed that the team did have a brief meeting held by the players after last night’s loss. Stay tuned, Insiders – there’s a lot more to come on a chilly Wednesday out east. 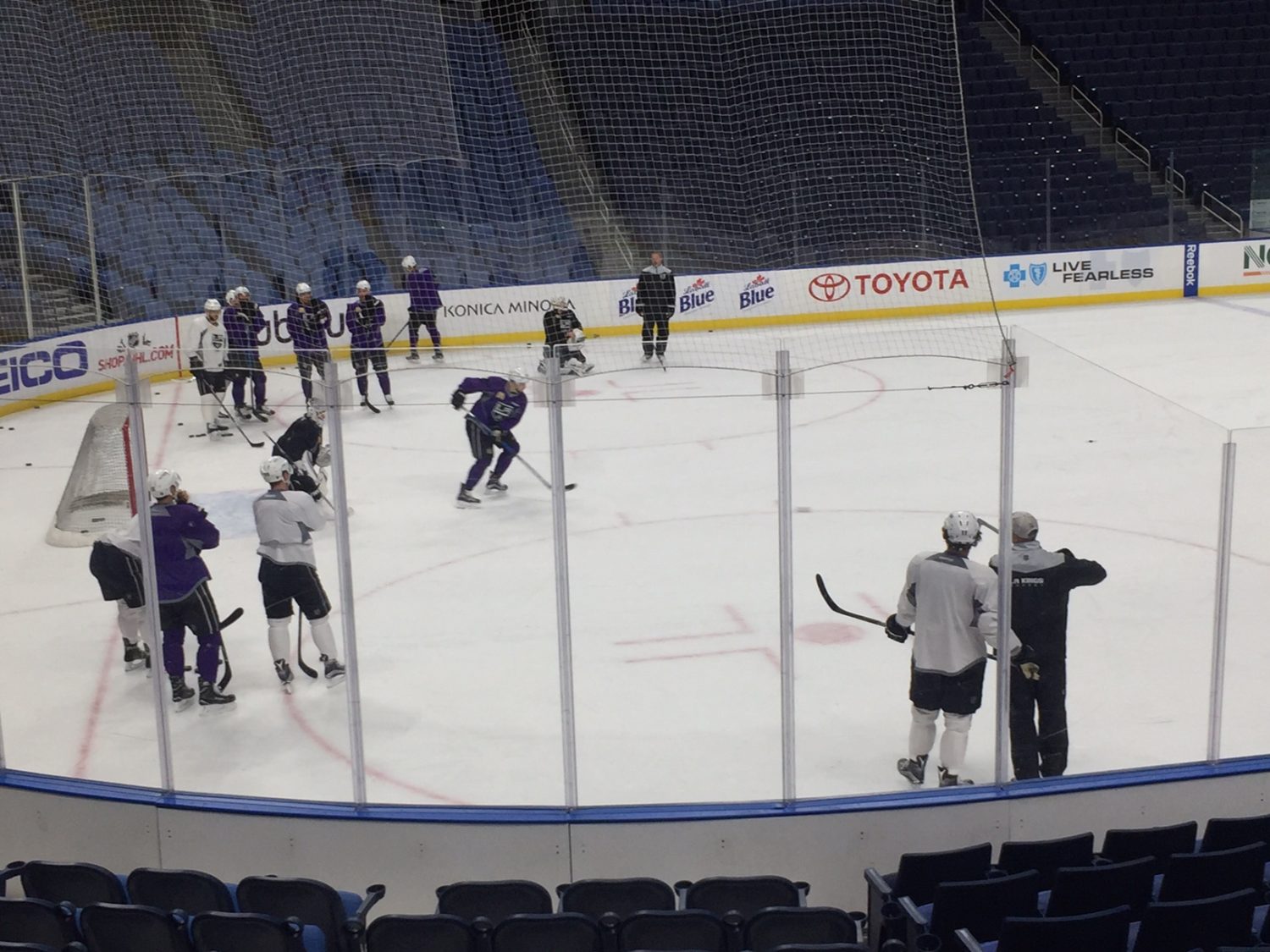 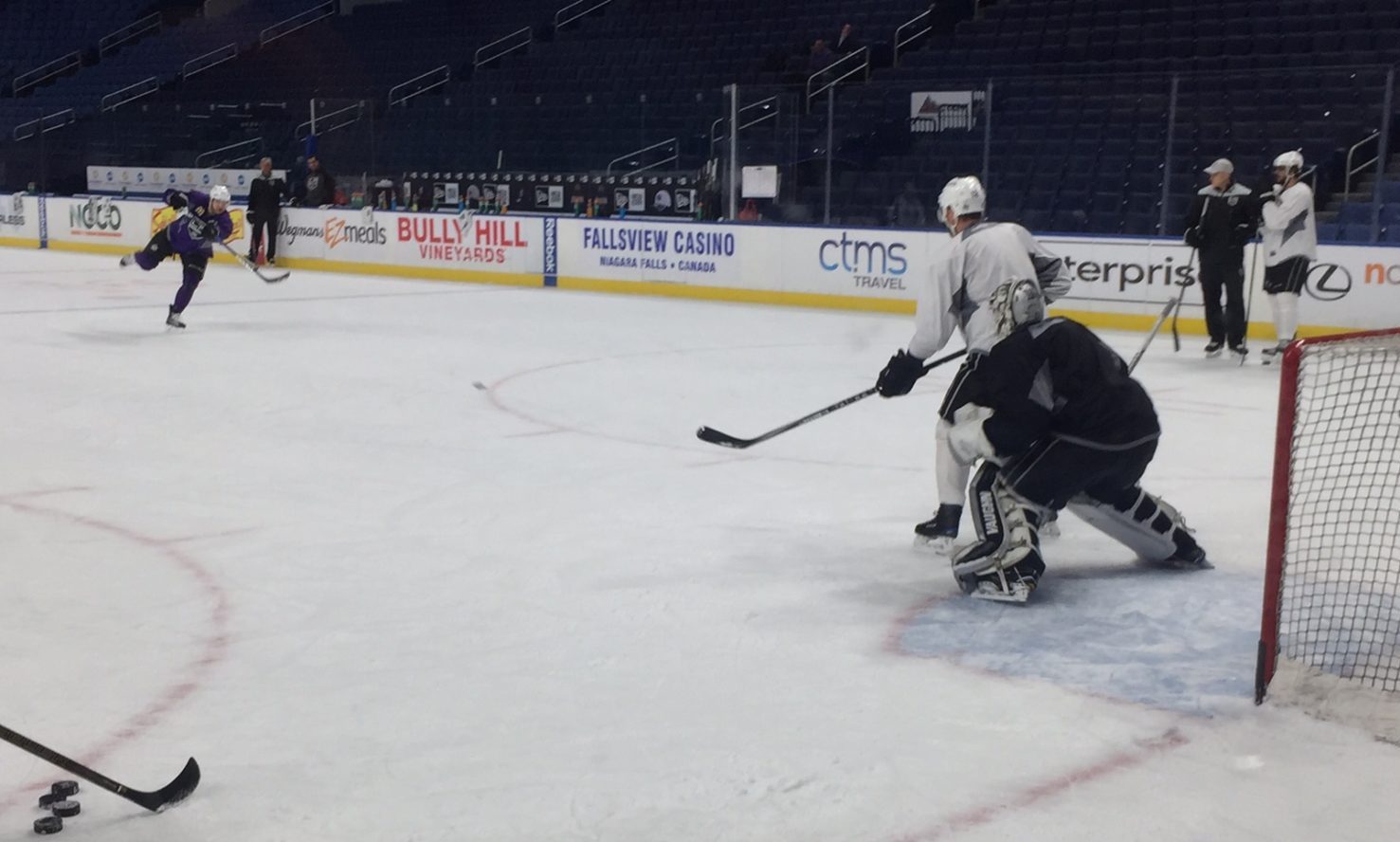