As inhospitable as the winters may be in this Western New York city, the Kings have faced much worse inside the doors of the KeyBank Center.

Drew Doughty was taken aback by the length of the team’s struggles in Buffalo. “In 14 years?” he asked before acknowledging that some challenges for players, such as reduced attendance, do not really apply to the Sabres’ home.

“Buildings where you kind of find it hard to win are buildings like Florida or Phoenix or something when there’s just no atmosphere in there, but you know when the fans are loud and good, it’s fun to play in those types of buildings,” he said. “Yeah, I didn’t know that we hadn’t won in this one in that long, but obviously we’ve got to change that tonight and come up with a win.”

Interestingly, the Sabres have endured their own struggles at Staples Center, where the Kings have won three consecutive home games in the series by identical 2-0 scores.

Still, most players will agree that despite what the records show, it is about particular personnel, and not the intangibles related to particular buildings, that lead to wider swaths of success or failure.

“No, I think these guys always play well [against us],” Matt Greene said. “They’re a hard-working team and they’ve infused their roster with some more skill right now, and we’ve been on the wrong side [in recent road match-ups]. I mean, every building is tough to play in – that’s why you have home ice – but these guys have always been good, but you know, we just haven’t been able to come out on top yet.”

All recent games in the series have been low-scoring. In Los Angeles’ last three trips here, they’ve lost 2-1 in overtime, 1-0, and 3-2 in a shootout. Adding injury to insult, that latter game featured Jonathan Quick’s Grade 2 groin strain early in the 2013-14 season.

“We want it to be low scoring, that’s more in our favor,” Greene said. “We’re not a run-and-gun team. Again, I don’t know any rhyme or reason to it. If I did, we probably would’ve won some of those games, but we want to be in a tight-checking game, we don’t want to give up much, and we want to bury our chances.” 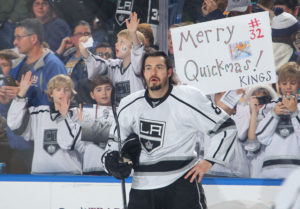 It’s a stop on the circuit in which the players will take the ice in front of friends and family. Like Toronto, Buffalo serves as a locus to which the families of many players based nearby will commute to. Doughty (London, ON), Tanner Pearson (Kitchener, ON) and Dustin Brown (Ithaca, NY) are among those who will have a contingent of white-and-black clad friends and family members in attendance.

“Yeah, lots of people coming in this game and Detroit,” Doughty said. “It’s only a two-hour drive for them, so this is my opportunity to see my family and friends and stuff like that, so it’s always exciting to hopefully get a win for them and then see them after the game.”

In front of lots of friends and family in Toronto, Los Angeles prevailed 7-0 in November. Might this be the night they end their skid in Buffalo?

Drew Doughty, on missing most of the last practice before the road trip:
Yeah it’s just something minor, so I’m good to go. It’s just good to get one practice off and get ready for today.

Doughty, on the location of his injury:
It was literally just something small, but yeah, I kind of did the splits and … there’s no point with me really going on the ice with two days in between games, so yeah, I feel good, ready to go.

Doughty, on the power play scoring five goals in their last three home games:
It’s always time to get some goals, and then we were still trying to do the same things we’ve been talking about since day one here and that’s just getting more shots, more bodies in front and make simple plays. You know, I don’t know what the difference really was in those three games getting all those goals, but we’re just trying to get pucks to the net and they’ve been going in and we need to continue to do that because our power play can help us win some games.