As Amadio’s comfortability rises, so does production and confidence 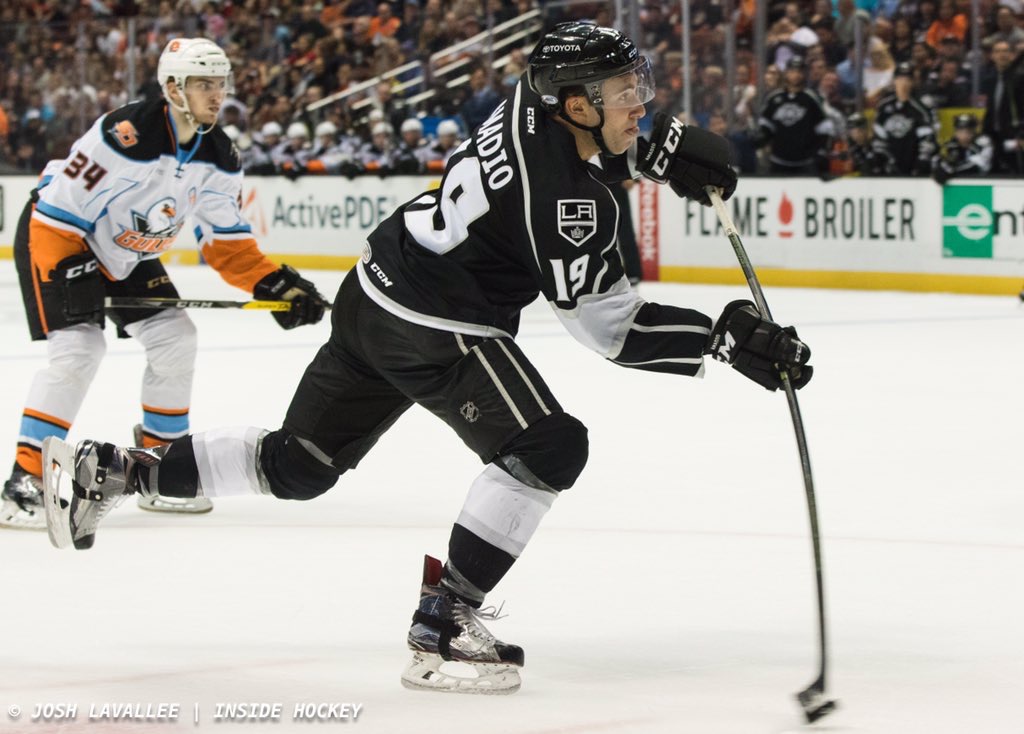 The patient pursuit for points has ended for Reign rookie center Mike Amadio.

The 20-year-old who had produced just one assist in his first eight games strung together a flurry of points last week. Not only did he score his first goal, he’s now on a three-game point streak. Amadio has two goals and two assists in the last three games, two of those being Reign (5-3-3-0) victories.

“I feel more confident with the puck making plays,” Amadio said Tuesday. “My first few games I was a little nervous but I think now I’ve gained that confidence and I’m starting to make some plays.”

By appearing in all 11 games this season, Amadio has now played in the same amount of contests as he did in the playoffs a season ago when he made his AHL debut. At that point, a wide-eyed Amadio had joined the Reign after an impressive 50-goal season in his final spin with the OHL’s North Bay Battalion in which he nearly reached the 100-point plateau (50-48=98).

“My first game I didn’t really know what to expect and how fast it was going to be,” he said of the AHL pace. “The guys aren’t kidding when they say when you get the puck you need to make a play and know what to do with the puck. That was the biggest thing for me. In junior you have a little more time to make a play, but here you have to know what you’re doing with the puck before you get it.”

As his comfort level is rising in the pro game so is his effectiveness, but like most rookies it’s a work in progress.

“It takes some time. You don’t just step into a league and think you’re going to dominate. Not that he thought he was going to, but we were all willing to be patient with him,” head coach Mike Stothers said. “He’s a pretty smart kid out there. He’s got to sort out the game, too. He’s playing against men, big, strong guys that he might have been able to do some things in junior, just get away with maybe just his stick, but now he’s got to put some weight behind it and some strength behind it.

“Last year in junior I was playing against pretty much all younger kids,” he said. “Playing against older guys who are bigger, stronger is definitely a challenge. I’ve just got to go in with the mentality to win my one-on-one and go in corners and be able to come out with the puck.”

Both of Amadio’s goals last week came right around the blue paint as he either crept in behind the defense or won a position battle in front. He scored the Reign’s only goal in a 5-1 loss to the Rampage and scored again on a rebound against Iowa during a third-period comeback.

“I know this organization is big on getting to the net and getting to those dirty areas to score goals,” Amadio said. “That’s where they’re going to come from. You’re not going to get a bunch from outside on the perimeter.”

His assist in last Saturday’s win over Iowa he read a breakout and intercepted a pass before sending over a clean feed to a streaking Adrian Kempe.

Stothers has moved Amadio around the lineup, but for the most part he’s been either a No. 1 or No. 2 centerman. He, like most players this early season, has skated with a variety of names of which include Kempe, Michael Mersch, Jonny Brodzinski, but most recently veteran Brett Sutter and power forward Justin Auger. The coach seems to like him there.

“I think the line of Sutter, him and Augs has been pretty darn good,” Stothers said. “You’ve definitely got some size with Augs obviously and Sutts is a pretty gritty, hard-nosed type of guy. They make a little more room for Mike, but he’s doing a better job of winning puck battles. That’s an area that he still needs to improve upon. Obviously he’s best when he has the puck, but he has to help get it back. And that’s where he’s learning as he goes. It’s been good.

“I think it’s good that it happened for him, that he’s getting some points, because from a confidence standpoint he’s a guy who’s a points producer so those guys base everything on points.”

The pieces are starting to come together, now the hope and the key is for it all to continue.

Amadio, on the challenges of the pro game:
Just all aspects of the game. I experienced a bit last year in playoffs and so I knew some things to expect but it was still an adjustment for me. Playing in the D zone, making sure I’m in the right spot at the right time and all that, supporting guys all over the ice so I think that was the biggest thing for me.

Amadio, on which players have helped give him advice:
All the guys are great guys in the room. They try to bring your confidence up, bring you into the room, it’s awesome to be a part of.

Amadio, on the differences between Ontario, Canada, and Ontario, California:
It’s definitely a big change obviously. I was in Northern Ontario, the weather’s a lot different, not used to this. It’s nice. The transition is going smoothly and I’ve been enjoying it since I’ve been here.