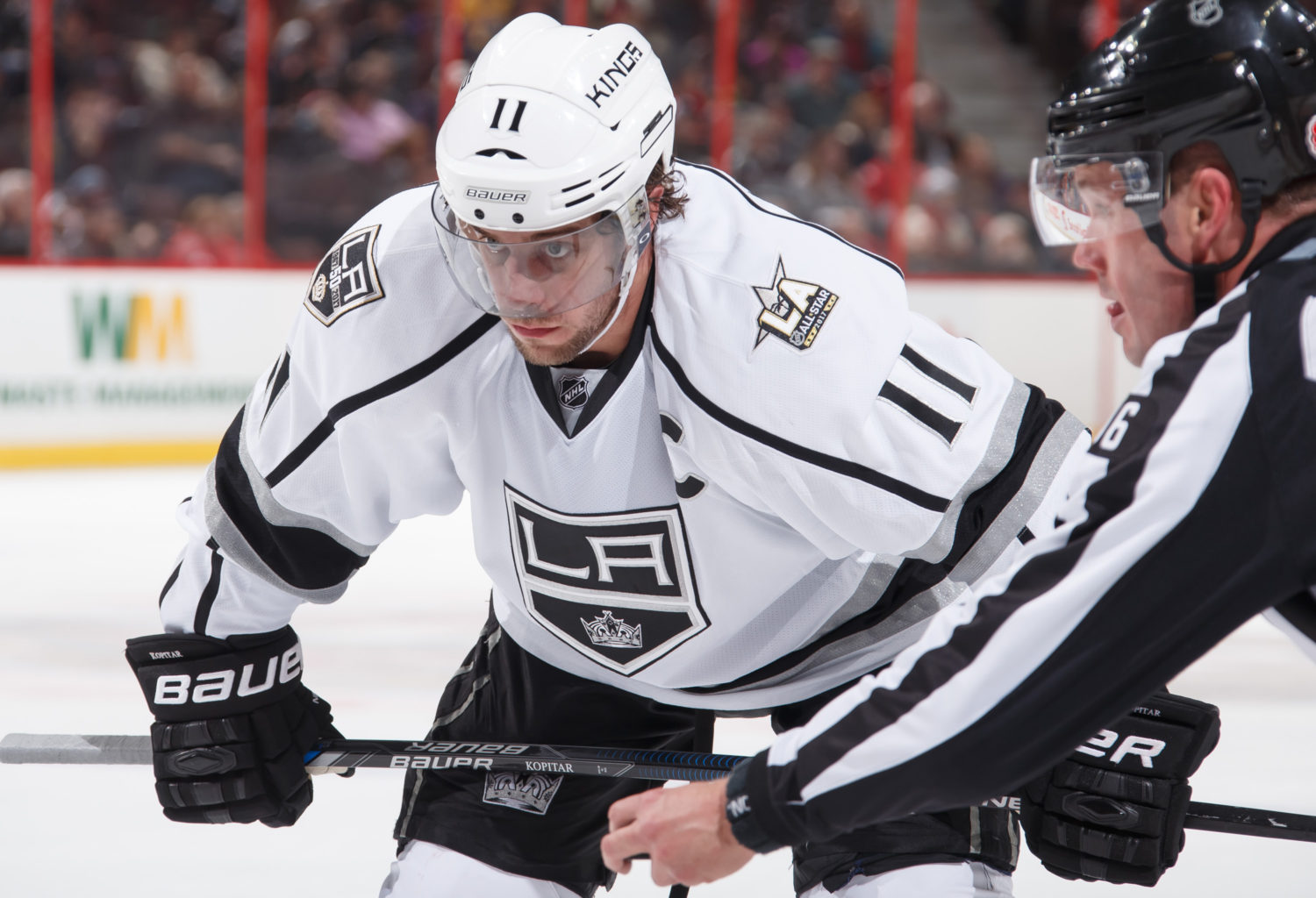 Andreoff and Gaborik stories will follow, but Kopitar, who suffered an upper-body injury against Ottawa on Friday when he was bumped along the boards by Senators defenseman Marc Methot, is progressing.

“…It’s a play that happens about 20 times a game and it was just one of those things where it was just a little bit awkward going in and that was it,” said Kopitar, who said that he was “squeezed” on the play but preferred not to disclose the exact nature of the injury.

Despite the progress, Kopitar is unlikely to play Thursday when the Edmonton Oilers make their first of two Staples Center visits this season.

“The so-called status hasn’t changed, it’s day-to-day,” he said. “It’s been feeling better and better but just not quite to where I need to be and not quite good enough, obviously, to play. So that’s where I’m at.”

Kopitar hadn’t skated since the injury out of caution that “everything’s in a position where I can’t hurt it anymore,” he said. That confirmation came Wednesday morning, allowing him to get on skates for the team’s first practice in El Segundo following a 1-3-1 road trip. He had also been taking anti-inflammatories while on the road trip as an effort to reduce the swelling in the affected area.

At practice, he wasn’t exactly winding up for slapshots, but he did throw several pucks at the net and was able to stickhandle lightly during his on-ice session. He cited “pain tolerance” as one of the final barriers to clear before his return is imminent.

“I think it’s progression. It definitely helps out to be out there on the ice and just, you know, be on the ice and have the feel and all of that,” he said. “Again, ‘day-to-day,’ skate again tomorrow, see what happens, and we’ll go from there.”

Kopitar said that “it’s great to see [Gaborik] out there,” and also shared an observation on his good friend Dustin Brown, who has opened the season with three goals and nine points in 17 games after totaling 27, 27 and 28 points in his three previous seasons.

“I mean, I don’t think the last two seasons went according to his plan and he’ll be the first guy to tell you ,so I think this year with the way he’s going it’s obviously great for us,” Kopitar said. “I think it’s great for him mentally to block out what happened and leave that behind, and he’s been playing really well for us. I think him and Nic Dowd have been playing exceptionally well. You know, obviously there’s no secret to it, we’re going to need them to play well going forward.”

Anze Kopitar, on whether the World Cup and Olympic Qualifiers hurt or helped him:
It didn’t really hurt anything. Not too often you can get, what did I play, six exhibition games on the World Cup stage? So I used that as preparation, and just obviously having good exhibition games and getting ready for the season and it definitely didn’t hurt. I think it helped me, if anything.