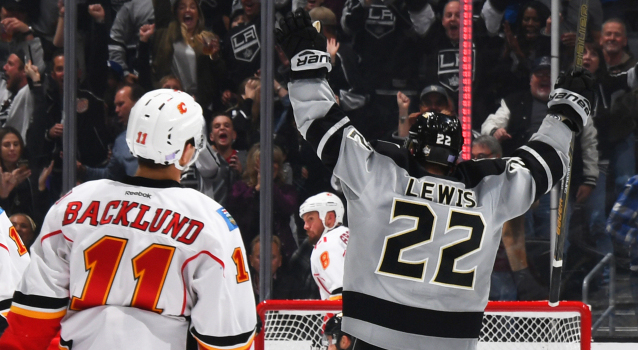 Glen Gulutzan, on what he thought of the Flames performance:
No it was definitely, it ranks right up there with our game against St. Louis at home as far as not really showing up prepared to play.

Gulutzan, on why the Flames didn’t show up:
I think we were a little intimidated to begin with, and I think we could’ve gotten out of that first period. We had a little mistake at the blue line, a turnover, and they get two quick goals with a minute left. That was a killer after some good penalty killing, so we needed to get out of that period and regroup and we just couldn’t do it.

Gulutzan, on whether the Flames have an issue with consistency:
Yeah. I just didn’t think we were prepared to play in the beginning. I didn’t think it was our best, I think we were a little bit intimidated, and we came out better in the second but we couldn’t sustain anything. That’s a real good hockey club, they had their groove on today, the LA-style game, and we just couldn’t match it. We have to find a way to match it.

Gulutzan, on why the Kings were successful:
Well I thought LA came out with a good start and they put us on our heels a little bit. I think if we could’ve come out of the first period with the score being 0-0, got out of that last minute. I thought that would’ve put us in a position to regroup in the second and come out better. I just thought they came real hungry and ready and that’s what happens.

Gulutzan, on Elliott’s performance:
We all shoulder blames of losses, we all do. We’re a group and he battled for us all night, it was just too many shots for him to give up and to take on.

Brian Elliott, on what stood out in the 5-0 loss:
Well we just got beat, kind of got our game handed to us a little bit. You have to take that away, that it’s a big boys game. The last minute of a period you can’t give up a couple goals so that’s what hurt us and it just went on from there.

Elliott, on why the Kings were successful against the Flames:
I mean, you have to kind of sit back and watch that again just to see what was going on. You felt a little bit there, just coming wave after wave and odd-man rushes and stuff like that so it’s not really winning hockey when you’re chasing them from behind a little bit.

Elliott, on using this game as a “measuring stick” for the Flames:
Yeah, I guess we didn’t measure up too well. It’s not the way I want to play and I don’t think anybody in our room could say they played the way they wanted to play either. It’s just individually, as a team, as a group, we need to be a lot better then that.

Michael Frolik, on the first period goals by LA:
Yeah, if it was 0-0 maybe I think it would maybe be a different game. Yeah, it happened after a turnover there a little bit and then like a bad change or something. Yeah it’s tough, you got to try and learn from those kind of mistakes and you just can’t let it happen again.

Frolik, on getting away from the Flames style of play:
Yeah, I wish I could tell you why or what happened there, I think they just kind of out-battled us tonight. I think they were stronger on the battles and we kind of weren’t there in those areas, be stronger on those walls. We didn’t get those pucks out and a couple of turnovers in our zone and we just need to be a little bit cleaner there and just play maybe a little bit more physical and go after them.

Frolik, on getting ready for their game tomorrow against Anaheim:
Yeah I think maybe we’re gonna have tomorrow morning a little video you know, clean up some few mistakes and just I think put it behind us. Forget about it, and those games are getting one after another so you just learn from it, clean up a few mistakes and get ready for the next one. I know it’s a big one in Anaheim, I know it’s a long time, so I think it’s time for us to break the record there and come up for the win.

Frolik, on whether confidence is an issue for the Flames right now:
Yeah, maybe. Obviously those top guys you know, like Monny, Johnny, I think they just want to do a little bit too much. I’ve been there too, I know when it’s not coming, the points or you’re not getting on the board it’s tough but you just need to stick with it, work hard, don’t try to think about it too much and just go out there and do the simple things and the offense is going to come later. I think we won in San Jose so I think our confidence should be pretty good there coming in to this game but obviously it kind of hurt us today. Hopefully we can bounce back tomorrow and I think if we win tomorrow it’s an even game so I think it’s gonna be good for us if we win tomorrow.