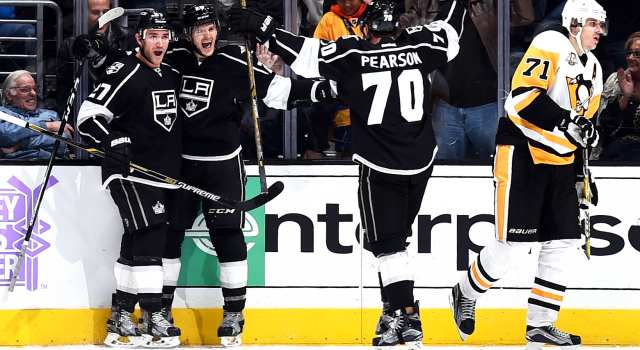 Matt Greene, on whether there was a sense of relief in the overtime win:
Yeah, we needed to win [inaudible]. I think it was a big game for us. A really good team coming in here, and we needed points to keep pace with this division. It’s a big win. Obviously we want to get it in regulation, but we’ll take the points how we can get ‘em.

Greene, on what stood out, emotion-wise:
Guys are playing hard. You have the typical early comeback to stay in it, get some scoring, guys paying the price too, blocking a lot of shots. Great penalty kill at the end there, and obviously it’s never fun taking that penalty, but it was good to see the group of guys step up and get it done. That’s what we need to win games.

Greene, on what he had seen prior to his goal, after Jeff Carter won the faceoff:
Nothing. I just get the puck and shoot, that’s it. There’s really no rhyme or reason to what’s going on. Just try to shoot the puck as hard as you can at the net every time.

Greene, on whether there was any different feel or emotion, given the team’s circumstances and with the defending champions in town:
Every team’s great now in the league. There’s really no let down, there’s nobody that you can’t play with emotion for, and that’s what we had to do tonight. You’ve got to gear up, you’ve got to be ready to play, and the guys did a really good job of that tonight.

Greene, on what the rally said about the team:
If everybody’s on their game, we can play well. Obviously right now you hit a skid like that when things are kind of out of sync a little bit, but our team right now, with who we have playing, and we need everybody to play their best game every night, and that’s what we had tonight, and we’ve got to continue that going forward. Everybody’s got to be really good every night for us to keep getting points and keep pace.

Nic Dowd, on the win:
…The most important thing, we finally started scoring some goals. Big goal from Lewie, big goal from Greener, and I think our line kind of owed ‘em one. We gave up that goal up late. It was good to get back on track, put it that way.

Dowd, on his goal:
Right away, I was just happy I got the puck over to Marty. Made a backhanded pass across the ice kind of as I was falling, and then I was kind of hoping Marty was going to slip it to Pears for a little breakaway, and then it kind of bounced into the corner and Pears made a really really good play through traffic. Just because I had fallen over, I was coming late and tried to take my time and make a play, and it just kind of worked out.

Dowd, on whether he knew his move beforehand, or just tried to read the goalie:
It was all reaction. Usually I’m definitely more of a shooter, especially with the ice being as bad as it was. I think my first reaction was just to one-time it, and then stuff kind of started processing in my brain, and luckily it just all came together. [Reporter: Can you almost have too much time sometimes?] Definitely. I would definitely say that me, specifically, I think I’d rather react than have too much time – like, take a shootout or something, for example. But it ended up working out tonight. [Reporter: Did you see the open side when you went there?] No, I did a fake shot and kind of waited and waited and pulled it, and then luckily it was open.