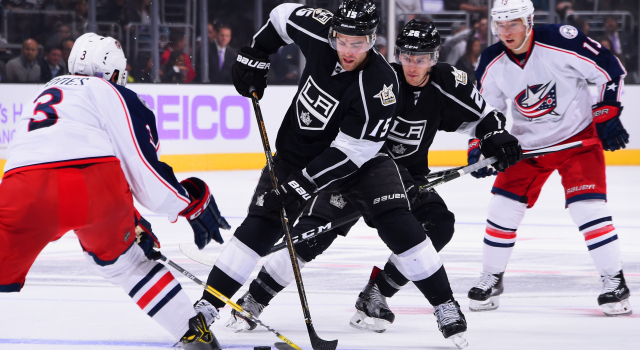 Andy Andreoff, who suffered an upper-body injury during Sunday’s 3-0 loss in Chicago, has been placed on injured reserve, the Kings announced Thursday. According to a hockey operations source, Andreoff’s timeline is “week-to-week.”

Andreoff (upper-body) joins Jonathan Quick (groin), Jeff Zatkoff (groin), Brayden McNabb (upper-body) and Marian Gaborik (foot) as Kings targeted for the opening night roster who’ve been placed on injured reserve this season. Forward Teddy Purcell was also sidelined by an undisclosed injury picked up early in the season but is expected to return to action tonight.

The transaction leaves 22 players on the active roster. Because of Tom Gilbert’s three-game suspension, the team’s only extra skater, based on lines shown at today’s morning skate, is Jordan Nolan.

The forward did not return to the Kings-Blackhawks game after the 2:24 mark of the second period, and during the second intermission a team spokesperson said that he had suffered an upper-body injury and would not return.

There was no video of Andreoff’s injury, and the play by play log did not offer any hints towards the nature of the ailment. In 3:56 of ice time, Andreoff was not credited with any blocked shots, nor was he the recipient of any recorded hits.

In nine games this season, the 25-year-old Andreoff has been held without a point. He has a minus-one rating, eight penalty minutes and four shots on goal.