Potential for chemistry to grow in Brown-Dowd duo? 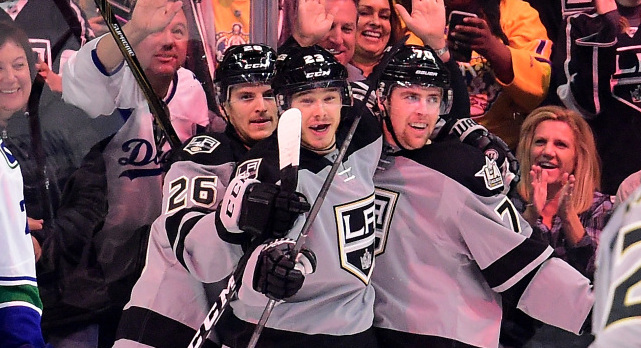 Though Wednesday has been one extended documentation of the Kings’ scoring woes, it should also be noted that the team, prior to the three-game scoreless streak, has been banking on some sturdy performances by a pair of players whose contributions could ultimately serve as a a badly needed asset to aid offensive depth.

That’s certainly not the case at this point, given that the last goal the team scored was Jeff Carter’s greasy overtime winner against Nashville last Thursday. But Nic Dowd and Dustin Brown have both graded fairly well through the first 10 games of the season.

“I think he’s an easy guy to play with once I figured him out,” Dowd said. “I know he likes to go north, some guys like to pull the puck back, some guys like to go right ahead, and he’s definitely a north guy so knowing that it’s good to get up in the play and I know where he’s going. He’s trying to get to the net and trying to get below the goal line so it makes it easy for me and I just hope I can do the same with him. “I’m definitely a passer, I know he likes to shoot the puck so I think we complement each other pretty well.”

They’ve combined to log nine points in 18 games and have also worked alongside each other on the power play, where most of their production has taken place. While on the surface their numbers don’t set the world on fire, if they were to maintain their pace Brown would see a significant raise in his production, and Dowd would provide a strong return for a player who had logged five total games prior to this season.

He’s also recently been encouraged by the north-south, physical, emotional game that Sutter and the Kings need from Brown. “I think the last couple games he’s been really good at it,” he said.

Brown and Dowd, along with Lewis, were effective on the forecheck in the first period against Anaheim, though they were on the ice for a pair of even strength goals against. But Brown, too, sees some promise in the tandem, even if three of Dowd’s four points have come during the man advantage.

“I think we’ve kind of played well together, we talk about a lot of things on the ice, off the ice. Just where we want to be, what we want to do, those sorts of things,” Brown said. “This is his first year, so it’s probably just the consistency thing that you learn. He has a really good vision on the ice, so it makes it easy to play with him and I think the key thing is we have a pretty open dialogue during the game. Mistakes are going to be made, but just getting better each game and getting more comfortable with each other. Like I said, he’s not a young guy. He’s 26 years old, but it’s his first year, so it’s just finding that consistency, making those plays. I think it’s been working.”

One of the mistakes was not being able to get in position to play the puck on a faceoff with Ryan Kesler in the Kings’ zone late in the first period. Kesler kicked the puck back to Rickard Rakell, who snapped it off Peter Budaj’s pad and through the goaltender’s five-hole to put Anaheim up 1-0 after a first period in which Dowd, Brown and Lewis formed the team’s most up-tempo, energetic trio.

“Obviously [Kesler’s] really good on draws to begin with, and I knew that was a big opportunity for me, obviously I kind of spoiled it,” said Dowd. “But yeah, I mean you watch guys, there’s film on guys, you know what guys’ tendencies are, but I’ve yet to see him do that before on the video that I’ve watched. Kind of caught me off-guard a little bit and like you said, a ‘learning experience,’ so it won’t ever happen again, but he made a good play.”

Maybe there was no real concerted effort to do so, but two years ago, through the glimpses into the dressing room dynamic and on-ice chemistry that reporters are privy to, Dustin Brown appeared to take on the role of an experienced and sage influence on then-rookie Nick Shore. It’s too early to gauge whether any sort of relationship would grow out of his early ability to generate a similar chemistry with Dowd, but there are still a set of circumstances linking the two players separated by nearly 900 games of NHL experience.

“It’s just like every player’s progression when you think he’s ready to play at this level, when he understands that there’s little things that go in to that,” Brown said. “Like I said, it’s an open dialogue between us, and then the main thing with a guy like Nic is he’s still a student of the game and that’s always important. Even as you progress, I’ve been in the league for 15 years and I’m still learning every day and if you don’t have that then you can’t learn what you think you already know. I think that works with both of us, because I think there’s certain things, just tendencies in the game. … We’ve had a couple different line-mates, last night it was Lewy and I thought it worked pretty well, especially in the first, we were really good in the first. But like I said, it’s more on him to have the confidence to play at this level, being able to learn as we go.”

Dustin Brown, on the team’s mentality after getting shutout three games in a row:
Yeah I mean, we’ve had this happen, maybe not to this extent obviously but a lack of scoring here. As players, we’re all well aware of it. Again it’s not about—the last thing we want to do is cheat for goals. We play a certain way, but we’ve got to find a way to score goals, that’s the bottom line, but you can’t sacrifice the rest of our game to find goals because it’s just not long-term, it’s not going to be that productive or successful if we’re sacrificing our defensive structure or all the other little things that we do well to score goals. Right now guys are struggling and it’s times like this that you kind of have to band together and figure it out together.

Brown, on the majority of the Kings’ shots coming from the perimeter:
From an X’s and O’s, I think if we’re passing the puck better and our support is better, the other part is just willingness to go there and guys got to be willing to go there. That’s on the guys in the room, certain guys can get there every night and [Reporter: That’s not tactical that’s just…] That’s just, yeah, getting there. Going to the net, getting screens on goalies, guys that are willing. I mean, you look at our defense, we have a pretty offensive group back there, as forwards it’s our job to make it hard for goalies to see. You’ve got Muzz, Drew and Marty, all who shoot the puck really well and make plays back there so it’s about getting traffic in front of the guys because if you don’t, goalies are pretty good.

Nic Dowd, on the positives from yesterday’s first period against the Ducks:
Just energy, I thought all three guys were really good. I thought Lewy was really good as well, Brownie was good and I though once we got the puck in the zone guys were hanging on to it and making plays and getting to the net and I thought we were beating guys to pucks which, you know, that doesn’t take any skill. I thought we just did a good job of getting the pucks first and once we did that the other two forwards were good supporters.