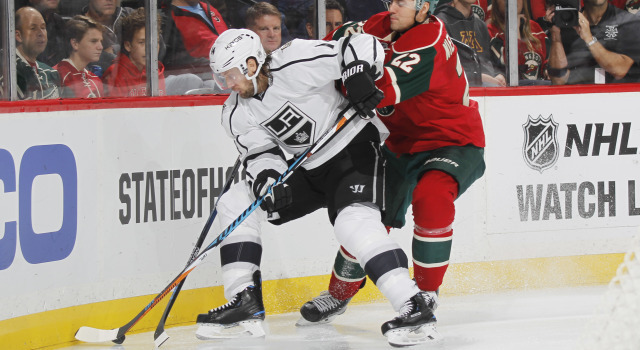 Defenseman Tom Gilbert will have a hearing with the Department of Player Safety Thursday for his second period hit on Anaheim’s Nick Ritchie, which was flagged for boarding/charching, according to the department’s Twitter account. Ritchie did not return to the game, and according to The Orange County Register’s Eric Stephens, “very likely” went through the league’s concussion protocol and is undergoing further evaluation.

“When he left the ice surface, I guess he went to the quiet room, per se,” [Ducks Head Coach Randy] Carlyle said. “They take the precautionary steps that are necessary. And then it’s basically up to what the player tells the doctors here in the next 10-12 hours, next 24 hours. Whatever time it takes.”

The Ducks called up forwards Ondrej Kase and Michael Sgarbossa from AHL-San Diego in advance of their game tonight against the Penguins, an indication that Ritchie is unable to play.

No penalty was called on the play, though a scrum followed the incident in which Gilbert and Corey Perry were both assessed roughing minors.

That’s a borderline hit, with the charging element coming as Gilbert walks the fine line between simply springboarding up in making contact, or actually leaving his feet as he finishes the hit. Though Gilbert doesn’t appear to make direct contact with Richie’s head, the force of the contact leads to his head smacking violently against the glass.

Should Gilbert receive a suspension, the Kings, who currently have an open roster spot, would need to recall a defenseman to be able to ice six players on the back end for Thursday’s game against Pittsburgh. No word was immediately available on how the Kings would plan to fill out their roster.

Via hockey ops, Gilbert’s hearing is schedule for 11:00 a.m. Thursday.