Zatkoff shares an update of where he’s at 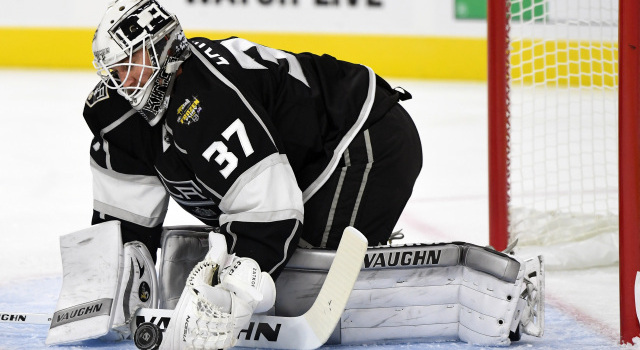 Jeff Zatkoff, who suffered a groin injury the morning of the game against Vancouver on October 22, is progressing but not quite ready to join the full team in practice. While not a long-term injury, it’s still an ailment that should keep Zatkoff on injured reserve for the near future.

The 29-year-old skated with Goaltending Coach Bill Ranford prior to the team’s morning skate for roughly “15 or 20 minutes,” and was pleased by his initial return to skates.

“Just going through some movements, kind of the first phase but felt a lot better than I anticipated, so we were able to do a few more things then I thought we were going to be able to do,” he said. “Good first step, for sure.”

Jeff Zatkoff, on how the injury happened:
Yeah it was a 2-on-1, low blocker, and I just kind of got in an awkward spot. The rebound, it wasn’t on the initial shot which I stopped but the rebound, I went to adjust and I went to snap my leg around and I think I got caught in an awkward spot. I think at the same time I tightened up my hip popped, too, and so it gave me a kind of a panic attack. I didn’t know exactly what had popped. Until the spasming kind of goes down, you never really know what to expect.

Zatkoff, on the next step in the recovery process:
Well I think just keep building on the skates, hopefully I have another good day tomorrow with Billy and then try and progress into practice and maybe some shots that aren’t, what’s the word I’m looking for, planned. You know, a little more reactionary and just make sure I can have that and kind of go from there. That’s kind of the next big step for me is not that pre-planned shot but just kind of going into a little something, just going with the flow and reacting and seeing how I handle it.

Zatkoff, on whether he can feel his injury progressing each day:
Yeah, I mean today was the first day I’ve been on the ice and it felt really good on the ice so I think we’re just going to wait and see and see how it feels tomorrow and then each day is a new plan, kind of build on it from there. With groins that’s kind of the way it is for goalies, it’s hard to predict it’s just day by day, you never know how it’s going to respond. [Reporter: It’s tricky, it’s always tricky]. Yeah, yeah, I’ve had days where I’ve come in and I’ve felt significant progress and other days where you come in and it just feels the same. So it’s definitely been trending in the right direction and it feels good so I’m obviously anxious to get back, I want to get back as soon as possible but I don’t want it to be something that, obviously with the situation we have and guys getting hurt, I don’t want it to be something that lingers all year. I want to make sure that when I come back that it’s taken care of and we can get on a roll here.

Zatkoff, on whether he’s disappointed he’ll miss the game against Pittsburgh:
I know, I was looking at it and it was definitely one I had circled on the calendar and obviously you want to play your old team, it’s fun, but we get them again later on in the year, so hopefully- [Reporter: Circle that one?] Yeah, hopefully get that one back. But it’s fun, it’s fun seeing all the guys. It’s weird, obviously when you switch teams and you’ve been somewhere for so long to kind of see them on the opposite team, but I’m excited to see them and obviously I have a lot of really great friends on that team and great memories last year so I’m excited to see everyone.

Zatkoff, on whether he knew that last season would be his last in Pittsburgh:
Yeah I mean, I think the writing was on the wall. They obviously have two guys, a younger guy and with Marc. I loved it there, I loved the organization but I also wanted to go somewhere where I felt like I could play and be part of the team and contribute and I’m really excited to be here now and I’ve got a really good opportunity in front of me here so that’s why I just want to get back and healthy and get rolling so we started to play well, I know we lost a couple there but I thought we played really well we just, you know, got shut out so we need to find a way to get it in the back of the net but Buds has been playing really well. It’d kind of be nice to come back and take a little bit of a load off his shoulders, he’s been playing a lot.