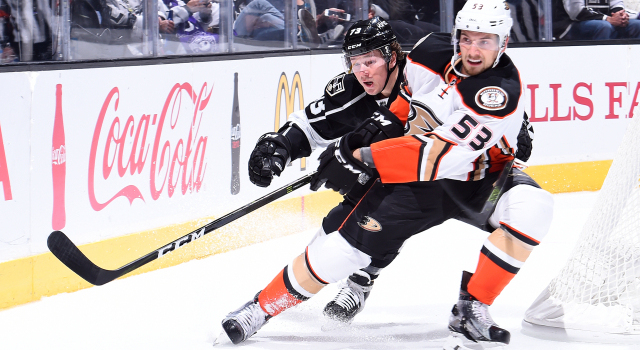 On whether there were any positives in the loss:
I thought the Dowd line was really good.

On how to turn around the losing streak:
Score a goal. I mean, disappointing. Not a recipe for success tonight when you don’t score and don’t get any saves.

On how to prevent the streak from getting worse:
Our game plan, it’s not going to change. There’s nobody coming in on a white horse to play goal for us or score goals or to come up from Ontario. This is our team. I’ve said it early, meaning two or three games ago, and I’ll say it again. Our responsibility is not to use the injuries as an excuse. The responsibility is to try and stay in the race. That’s really clear, so we’ll do some work tomorrow and we’re going to get ready for the next game.

On an assertion from Anze Kopitar that the team needed more emotion and desperation:
I think when you get detail, when there’s two or three mistakes probably tonight, that when you’re not scoring, there’s probably guys that sag a little bit. That’s up to Kopi and Drew and … Jeff. That’s a positive – Jeff and Megan had a little boy. That’s why Jeff – he was up all night. That’s awesome.
(ED: It was difficult to hear what Darryl said during part of the answer, thus the ellipsis. I’m waiting to see if I can pick it up from FOX’s post-game video.)

On the decision to pull Peter Budaj:
He wasn’t very good. I mean, did you look at the shots and scoring chances? He wasn’t very good. That’s clear. I don’t pull goalies very often, but they’re expected to make some saves. When they scored with 15 seconds left in the first period, that’s deflating to our hockey club. Or whatever it was – less than that, maybe. I’d say the only good goal tonight was Kesler’s tap-in.