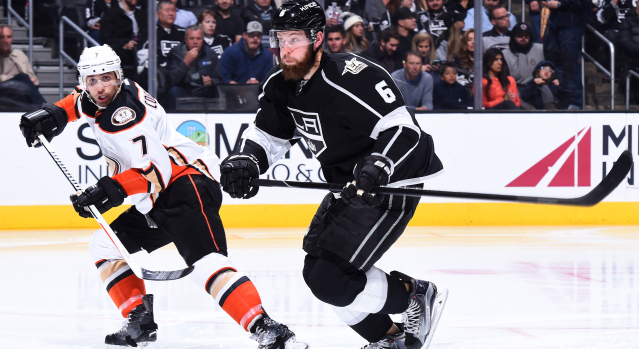 Randy Carlyle, on the win against LA being the Ducks’ most complete game:
Well i thought we were ready to play. Right off of the beginning we were able to skate and execute and we found a way to put a couple pucks across the line and things seemed to turn our favor, power play scored two goals, that’s the difference in the game.

Carlyle, on Rakell’s impact:
I would think that nobody would expect it right off the bat but we know he’s a skilled player. We’re going to move him around, we moved him to the right wing tonight and he hadn’t played right wing here before, so it’s just kind of getting his feet underneath him and then we moved him up with Getzlaf and Perry once Ritchie was out of the hockey game. He’s going to find that he’s going to move around to a bunch of different places in our line-up here for the next little while and once we solidify our line-up we’ll find a place for him to stay on a regular basis.

Carlyle, on Rakell’s potential with the Ducks:
Obviously the organization feels very highly of him, he’s a highly touted player and he’s a skilled player that can go in and play all three forward positions, he can play the point on the powerplay, and he’s really come in to his own. Specifically last year when they moved him in to the middle he played with Perry and scored 20 goals, you know and had fifty-some points. He’s an offensive player in the league, so it bodes well for our organization to have depth at that position, that you have a forward that’s versatile who can play all three forward positions, can play the point on the powerplay, you saw his hands and his skill and his vision tonight. We feel pretty fortunate to have that type of player on our side.

Carlyle, on keeping the Kings to the outside in the offensive zone:
Well that was definitely we had to improve on after our last outing, we weren’t very happy with the way we played at home against Columbus. We didn’t keep anybody to the outside and we didn’t execute very well and we didn’t have a very good game so we put the pressure on ourselves to say hey, we gotta have a better effort and this could be a statement game for our hockey club.

Carlyle, on Cramarossa’s first NHL goal:
He’s worked hard, and he’s had some chances in the games and we moved him up in our line-up, if you see we had Vermette and Cramarossa and Rakell was a line. We think highly of him and he’s being rewarded for his hard work and tonight it was good to see him get a—it wasn’t an easy goal, it was a wrap-around and he waited and went around the net and scored and then he got in to the fight at the end and he’s a scrappy individual. He’s played hard for us.

Carlyle, on any update to Nick Ritchie’s injury:
No. [Reporter: Have you had a chance to look at the play yet?] Yeah, yeah I just looked at it briefly. That’s really not for me to, I usually don’t make comments on that stuff, that’s somebody else’s job. They don’t tell me how to coach so I don’t tell them how to assess the injury.

Rickard Rakell, on making an immediate impact:
I was hoping to do that and I’m happy that I did. Best thing was to get the win.

Rakell, on his thought process during the game:
You just try to find your timing and everything throughout the game. I started feeling more comfortable the longer the game went on. So I’m just hoping to be able to build off this.

Rakell, on his goal:
I mean the plan was to always shoot it if I got it and Kes did a great face-off play and I just tried to get it through.

Rakell, on whether he was surprised to have good touches in his season debut:
I don’t know if it was, I think I just was at the right place at the right time today. Like I said, I’m just hoping to build off this and take every game as it comes.

Rakell, on how he builds off a three point night:
Just not trying to think too much and it’s a new game tomorrow. Just try and go out with the same mind set as I had today and just try and play my game.

Rakell, on what it means to contribute right away:
Yeah, of course it gives you confidence. I just hope to be able to build off this and just try to help the team as much as I can.

Rakell, on his chemistry with Antoine Vermette:
Yeah for sure, I mean it’s like when you play center, I always know where he is. It takes away time that I have to look down at the puck and just try and give it to him right away instead. He’s very easy to play with, just hoping to get even better.

Joseph Cramarossa, on whether he thought the Ducks had “a complete effort”:
Yeah as long as I’ve been here that’s a pretty complete game against a rival team like that, especially after losing to Columbus at home like we did. It’s a good bounce-back effort and it shows the character of this team.

Cramarossa, on scoring his first NHL goal:
Well, yeah that one in Nashville stung a bit but you got to put it behind you. There’ll be more chances if you earn them. It was a great pass from Vermette to Rakell to me across and I got a lucky bounce there so it feels good.

Cramarossa, on his line with Rakell and Vermette:
Yeah, well he is obviously an amazing player and he’s been working hard to get back so it just shows how ready he was and maybe it was a couple days early or what not, but I think he showed that he was ready to go.

Cramarossa, on taking a high-stick during the first period:
I’ve had a tough week here, a couple bumps and bruises in practice but whatever it takes.

Cramarossa, on making it to the NHL level:
It’s all happened so quick, no one really knows the plan going in to training camp and I just worked as hard as I could. To get my first game last week and to play games here every other day and to get my first goal, it’s just been a crazy week and I honestly haven’t had time to let it sink in yet.

John Gibson, on whether he thought the Ducks had “a complete effort”:
Yeah I thought it was good, any time you can beat LA in their building it’s a positive and I thought we played well on the special teams and we stayed out of the penalty box.

Gibson, on the mood in the Ducks locker room before the game:
I mean, it wasn’t really any different. We just knew that last game wasn’t our best and we knew that we had to respond and it was nice that we could make a statement and get a good win.

Gibson, on the back-to-back powerplay goals for the Ducks in the second period:
I think any time you can capitalize on the specialty teams that gives you an edge and you see the teams that have success usually have success on the powerplay and penalty kill so it was nice to have that and hopefully we can keep it rolling.

Gibson, on what the Ducks were doing to clear the lanes in front of him:
Clear the lanes. It’s what they did, I mean, it sounds simple but it’s not easy to do.

Gibson, on the Ducks feeding off of Rakell’s energy:
It was great, it was nice to see him get the first goal.