Martinez-Doughty pairing a long time in the making 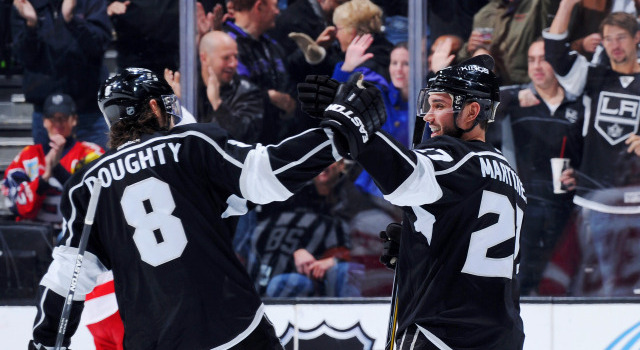 Alec Martinez, who made his debut in the 2009-10 season, has spent more time during five-on-five play with Matt Greene, Jake Muzzin, Willie Mitchell and Robyn Regehr than he has alongside Drew Doughty, who debuted one year earlier. Heck, he spent more five-on-five time in one season with Milan Lucic than he has spent through his first 346 career games alongside Doughty.

Due to the challenging circumstances early in this 2016-17 season, that’s in the process of changing.

“Drew’s always played in the top pair, and Marty’s evolved from a seventh guy to a third-pair guy to a second-pair guy, and because of injuries, he’s playing with Drew,” Darryl Sutter said.

The two players’ skill sets see quite a bit of overlap. They’re both able to jump up into the rush, issue a first pass on breakouts, offer a hard, accurate shot from the point, and play hard, sturdy minutes against the opposition’s top players while in the defensive zone. Both players’ checking credentials have shown strong improvement as their NHL careers have progressed.

Of course, when talking about Doughty, all of the above points are bolded, highlighted and underlined.

“I mean he’s the best D-man in the world,” Martinez said. “I just try to get the puck in his hands and stay out of his way, let him do his thing, but I think we compliment each other well and he likes to jump in the rush, as do I, it’s just something we have to be cognizant of and make sure we’re both not doing it at the same time. Like I said, he’s the best D-man in the world, so I love playing with him.”

The two were paired together at even strength during Sunday’s loss in Chicago, and Martinez’s 26:26 of ice time was the second-highest total he had logged in any NHL regular season game. They were the most in-the-black possession-wise out of any team defensemen at even strength.

“Yeah, we kind of joked about [not playing frequently together] before the game, that I think other than when I first got called up … I think he and I played together for maybe a couple games, no more than five games,” Martinez said. “I mean, we practice with each other, we’ve played with each other long enough and if you can’t play with Drew Doughty, then you’ve got problems.”

Doughty referenced the partnership as “different,” noting that there were some challenges to work through in the second period. Through their 307:02 of career ice time together in five-on-five play, the team has a rate of 1.76 goals for per 60 minutes and a 2.54 GA60, though their possession rates have been strong at 56.9%.

“I’ve never played with him [regularly at even strength] before so we had some things, we had a pretty rough second period. We have some things to clean up, but he is a great player, I enjoyed playing with him, and we’ll see if we stay together or not,” Doughty said.

Independent of how they fare in five-on-five play, they’re occasionally used together on the power play, though Darryl Sutter has recently opted for a righty-righty combination of Doughty and Tom Gilbert and a lefty-lefty pairing of Muzzin and Martinez, allowing the defensemen to be in a better position to fire off one-timers.

At the morning skate, they were paired together again and, barring any transactions or adjustments, could end up seeing plenty of ice together against Anaheim’s top players in tonight’s game. Given the injuries, such mixing and matching is out of necessity as the club looks to add another tally to the win column after a pair of losses.

“We’re over the injuries, we’re not even thinking about that at all,” Doughty said. “Yeah, it sucks that they’re gone, there’s no doubt about that, and we know they’re good guys to have in our room and stuff like that. But yeah, we’re by those injuries, we have guys that can play in our line-up that can be effective every single night even without those guys in it. We’re not worried about that, we’re past that, and we’re just worried about winning hockey games with the team we have right now.”

Alec Martinez, on deciding whether to join the rush or stay back:
Yeah I think it’s just a read that you have to make and obviously you can tell when a guy is jumping and he’s getting up in the play so you just slow down a little bit and take a little bit of a bigger picture read of what’s going on and just making sure that everyone is in front of you. Along with that, communicating with a forward if you see a D-man jumping up then obviously one of them has to hang back, so that happened a couple times last game. But it’s just a read then when I play with Muzz or Nabber or Greener. There’s going to be opportunities for them to jump up and it’s my duty to stay back.

Martinez, on any challenge in the first few shifts after switching from the right to left side, or vice versa:
Yeah sometimes, but I got the other guys helping me out. Sometimes I think, actually a lot of games, I end up going every other shift where one shift I’m on the left then I’m on the right, I think it’s important and I ask the bench to remind me, it’s important for the bench to know which side each guy is playing so we don’t have a bad change or anything. I usually just tell the guy if I start drifting to the right side then just yell at me and I’ll correct. But yeah it’s a bit of a mindset thing but I’ve done it plenty. I played pretty much my entire life on the left side until, I don’t know, three or four years ago. I think I played like fifty games on the right side with Mitchie.

Drew Doughty, on the increased parity within the Pacific Division:
Yeah, that’s good. I’ve found our division to always be tough even if the points didn’t show it, and maybe, you mentioned Edmonton, they weren’t as good in the past but they’re very, very good this year. I’ve always found our division difficult to play in, it’s physically draining to play in this division, but yeah, I think both divisions in the Western Conference is hard to play in. But it’s good that our division is really tough, that makes us become more accountable and we have to play better to win hockey games. It makes us better in the long-run.

Doughty, on the team’s 4-5-0 start to the season:
We’ve had ups and downs, and we have no excuses. Everyone is going to talk about the injuries and stuff, but that doesn’t have an impact on our team right now, we’ve got to battle through and that’s it. It comes down to the guys that our in the line-up playing better hockey, making each other accountable and expecting more from each other and then we’ll become a better team together.

Doughty, on a mention of too many shots coming from the perimeter:
Yep, yep, for sure. It seems like we’re going down the wings and just kind of throwing pucks off pads. We’re trying to get rebounds, but when you’re throwing pucks off pads from the perimeter against these types of goalies now-a-days they’re going to control their rebounds right into the corner. So we need to worry a little more about getting more traffic in front and just taking the puck to the net as hard as possible and then a puck will be laying there and you just put it into the empty net. I think it’s more about getting into those dirty areas for us right now.

Doughty, on the team’s low-scoring being similar to the regular season in 2012:
I think it’s pretty similar, we’re still the same team. We’re good defensively, we don’t give up too many high-quality shots, and when we do we have goalies that are able to make the saves. It doesn’t happen often through a game where we give up big chances but sometimes it does and they save the puck for us. But we’ve always been a low-scoring team, but you know, it’s not for the lack of trying to score more goals. We’re trying to work on that part of our game and become a better scoring team, but it’ll come, I know I’ve been saying that for years, it’ll come, but I see us going in the right direction and we’re going to score more goals.