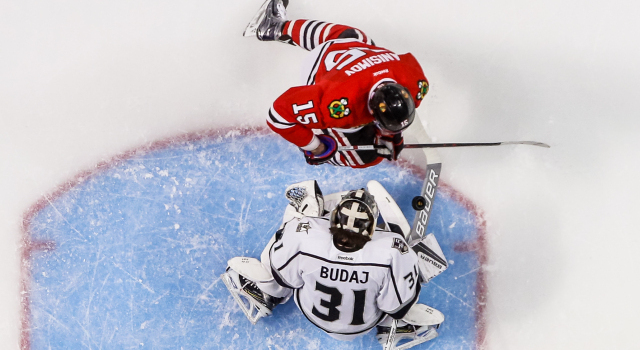 While the Kings didn’t win a game over the weekend, they were put in position to do so by goaltender Peter Budaj, who was very good in the shutout losses to St. Louis and Chicago.

Budaj, who stopped 50 of 53 shots against the Blues and Blackhawks, is now 4-2-0 with a 1.99 goals-against average and .916 save percentage since his recall this season and has shown improvement as he’s continued to work detail into areas of his game, according to goaltending coach Bill Ranford.

“Just because of his experience at the American Hockey League level he was kind of a step ahead being able to read things, read releases,” Ranford said. “Obviously at the NHL level everything happens a little bit quicker, shooters are a little better, so the detail part of his game has had to come to another level.”

The cavalcade of injuries has affected the Kings at both the NHL and AHL levels. Jonathan Quick has a long-term groin injury that should keep him sidelined well into the 2016-17 season, while Jeff Zatkoff suffered a groin injury at the morning skate on October 22 but should get back on the ice on Tuesday, according to Ranford.

With Budaj and Jack Campbell, the two goaltenders who opened the year at AHL-Ontario, up with the parent club, Jonah Imoo and Jack Flinn are now tending goal with the Reign. But even Imoo wasn’t spared from the injury bug, having been dinged with a lower-body injury during Saturday’s game that isn’t expected to sideline him long-term but necessitated on the second PTO extended to his father, Dusty, who backed Flinn up in the win over San Antonio on Sunday. Jonah Imoo’s injury came amidst the waiting game for Anders Lindback, a goalie with 130 games of NHL experience who signed a PTO with the club but whose visa status hasn’t yet been finalized.

Lindback can only play AHL games under his current PTO, according to TSN’s Bob McKenzie. His presence provides another goaltending option for the organization.

“He’s gonna be here with us this week, and then we’ll make a decision at the end of the week of what we’re going to do with him,” Ranford said of Lindback. “I haven’t seen him play in a while, so I’m going to do my due diligence today and look at some video of him. Once I get him on the ice, just try and do what I do with every goalie, just try and do little things to make him better and make him successful.”

Bill Ranford, on Peter Budaj’s strong performances against St. Louis and Chicago:
He’s hitting the spots that he needs to, and he’s not a big guy so he has to make sure that he’s in a position that he plays big. I thought the last two games he’s made the big saves to keep us in the hockey game. We just haven’t scored.

Ranford, on re-enforcing a “play big” mentality with Budaj:
For us it’s, as goalies, I wasn’t a big guy, it’s just making sure it’s all about angles. Nothing’s really changed, and obviously if you’re 6’4 you don’t have to be as high out on your crease, whereas if you’re 5’11” you’ve got to make those adjustments.

Ranford, on Budaj’s continued rebound from a difficult 2014-15:
I think there’s definitely a confidence in with what he did last year and a lack of confidence in what happened the year before. I know he ran into a few tough injuries and I think the aspect of when you don’t play a lot and you have injuries it’s tough, whereas last year I think he got into a rhythm right off the bat and carried [the Reign] from start to finish.