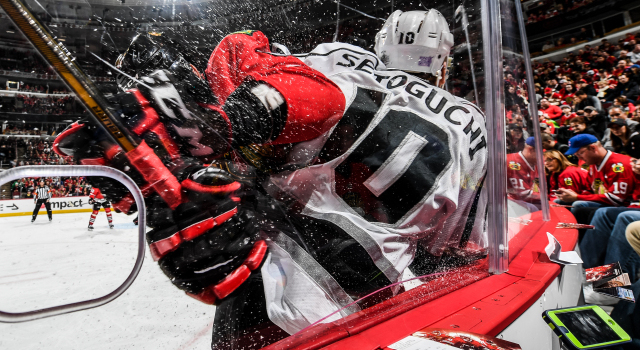 On the 3-0 loss:
I think we were sluggish in the first period, and I think we knew that they’d come out the way they would, and I think their top two lines the first period really controlled the pace of play for them, and I think we got out of the first period thankful it’s only one-nothing. Took two or three penalties. Even though they were stick penalties, they were basically feet-in-the-sand, not on the ice penalties. I thought the second period we got a little better, and then Hossa beat us off the wall over on the half-wall. Again, it was their top two lines against our guys that made a really strong play against us. I thought the third period was our best period.

On whether Chicago played “reasonably buttoned down” with a third period lead:
I’m sure they are. I mean, most teams, that’s usually what happens when you get [a multi-goal lead]. [Reporter: They’ve been struggling a bit.] Still, those teams have guys with really good structure and foundation know how to play that game.

On Matt Greene’s performance:
I thought Greener stepped in and did a good job for us. I thought our defense, quite honest, was outstanding. I think Peter would certainly like to have the first goal back, and our forwards weren’t up to the task. … Our defense was fine.

On Andy Andreoff:
Left with an injury. You guys saw that. I mean, you saw the same thing I did.