McNabb injured, will be reevaluated Sunday 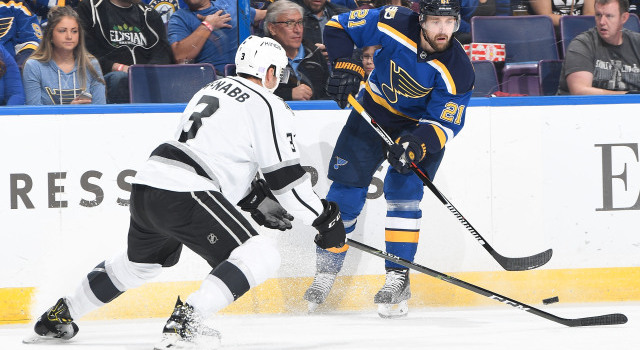 On his 18th shift of the game, defenseman Brayden McNabb became tangled up with 6-foot-6 Blues defenseman Colton Parayko after McNabb’s confident move to bring the puck deep into the attacking zone. The two collided, and McNabb winced in pain after falling towards the boards in the left corner.

McNabb did not return to the game after suffering what a team spokesperson said was an upper-body injury.

“We need him back. Brayden’s a big part of this team,” Drew Doughty told LA Kings Insider after Saturday’s 1-0 loss in St. Louis. “He doesn’t get talked about enough. He’s played unbelievable so far this season, and playing with him has made it easy on me, so hopefully he can come back. I didn’t see the play happen, but hopefully he’s OK to comeback because we’re going to need him really bad.”

Per Darryl Sutter, McNabb will be re-evaluated on Sunday. The Kings aren’t expected to hold a full team morning skate in advance of Sunday’s game at the Chicago Blackhawks, though Sutter should meet with the media several hours in advance of the 6:00 p.m. local start time, which is when the next update on McNabb is most likely to come.

If Los Angeles decides to call up a defenseman from AHL-Ontario, Kevin Gravel would be the most likely target, though there was no word as of late Saturday night as to whether such a roster move was imminent. Matt Greene, who last played in the second game of the season, could slot into the lineup for Sunday’s game at the United Center.