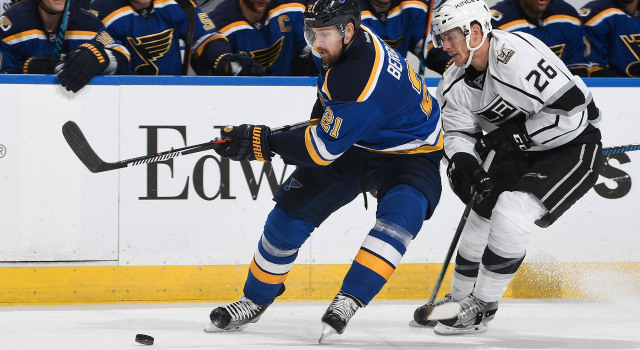 Anze Kopitar, on the challenges provided by the Blues’ penalty kill:
I think over the course of the last three, four, five years their penalty killing seems like it’s always been strong so we know what we’re going up against but in a game like this you gotta find something, you know, to put the puck in the net. We knew coming in that it was going to be a low-scoring game, it usually is with these guys. Our PK was good tonight, Peter [Budaj] played really well, but like I said we have to find one on the powerplay.

Kopitar, on whether or not low-scoring games are typical for the Blues and Kings:
Yeah I think so, I don’t think you’re gonna see too much… although there were quite a bit of chances, but the goalies, like I said, obviously were good. But yeah, usually the score is about 1-0, 2-1, it doesn’t get much more exciting than that. I think both teams played hard, it’s just a matter of finding one to put in the net. They did, we didn’t.

Kopitar, on the physicality of the Blues without Backes and Brouwer:
They still play a heavy game even though they don’t necessarily have the big bodies they did before. But they play a strong game, I’m pretty sure that’s their goal and they’re not going to go away from that.

Peter Budaj, on the loss:
…[recording began in progress] blindly pass it to Lehtera, blindly pass it to Schwartz who had the empty net so I think it’s just great chemistry between those guys and just sometimes good players make a good play and it’s a nice play for them, credit to them. Too bad we couldn’t get at least one or two but it works sometimes that way. Sometimes you get bounces, sometimes you don’t. The other game we got the bounces, this one we didn’t, but I think we played well, pretty decent game. Guys worked really hard in front of me and they played a great defensive game so we’re just going to build on that and get ready for tomorrow.

Budaj, on whether he feels more comfortable after each game:
I just want to take one game at at time, you know just get ready for this game and don’t think about what’s going to happen two, three, four days from now. I just want to get ready for this game and do better; we didn’t get any points but I think we worked hard and it’s a tough building against a very strong team so that’s still not an excuse. We could’ve gotten maybe a power play goal or something, but sometimes the bounces don’t go your way but you just have to regroup and get ready for tomorrow.