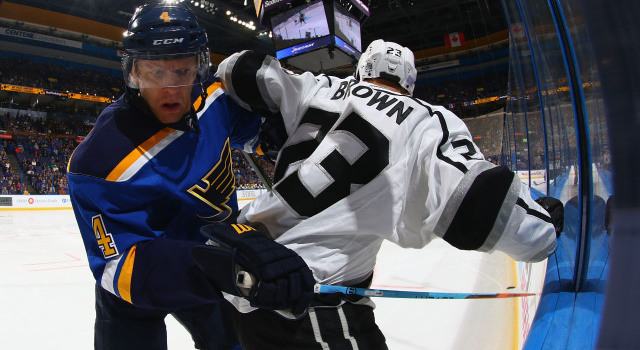 In search of win number 600 – he’s currently one away – Daryl Sutter will guide the Los Angeles Kings into a difficult back-to-back in which he’ll face teams piloted by a pair of other accomplished NHL coaches.

“That’s one of the best parts of going to St. Louis and Chicago, Ken Hitchcock and Joel Quenneville,” he said after Los Angeles’ morning skate.

With 761 career wins, Hitchcock ranks fourth all-time and second amongst active coaches. Quenneville, the 2010, 2013 and 2015 Stanley Cup champion as Chicago’s coach, and a 1996 champion as an assistant coach with Colorado, leads active coaches and ranks second all-time with 805. (Scotty Bowman is the all-time leader with 1,244 wins as a head coach.)

There is obviously ample respect between the two coaches and the styles of play they’ve fostered with their respective clubs.

Said Hitchcock: “I like coaching against Darryl. He’s just such an honest guy and it’s such an honest game. I really look forward to it. Their team plays an honest style – very straight up. There’s no question you don’t ever get anything less than a B-game, and most of the time you get some form of A-game. They’re the analytics darling of the National Hockey League. They have analytics that overwhelm you if you look at it, or overpower teams, if you look at it, and you’ve got to match some of the analytics.”

The Kings have fared well in many of the recent head-to-head meetings, having won 19 of the last 26, including playoffs. But both teams are showing some evolution – the Blues moreso that the Kings, many would argue – in a game that has changed a bit of its own. While a Los Angeles-St. Louis match-up has often raised the stock price of Eastern Missouri Ice Bag and Bandages, Inc., the Blues no longer call on the services of David Backes, Troy Brouwer or Steve Ott. More recent acquisitions, such as David Perron and Nail Yakupov, and the 2015-16 emergence of (then) teenage rookie Robby Fabbri, have provided a jolt of skill into a lineup that previously was similar to Los Angeles in its willingness to play a heavy game. (It probably still is, though maybe to a lesser extent.)

“I mean yeah, I guess they have a little bit different of a complexion, but there are still a lot of those core guys that are still there and they’re obviously still a really good hockey club,” Alec Martinez said. “That’s just kind of the way it is around the league, it’s really difficult with the business side of things to keep teams together for long periods of time and you’re going to see changes in personnel no matter what team it is in the league. You look at us, and they could probably say the thing about us. That’s just the way the league’s going and you just roll with it.”

Of course, there’s also defenseman Drew Doughty, whose talents are so diverse and profound that it’s hard to pigeonhole him into any particular style of play.

“He’s the most complete defenseman in the league,” said Hitchcock, who with Doughty won a gold medal with Team Canada at the 2014 Winter Olympics. “He’s the guy that you talk five tools, he’s got five tools. He’s got all five, and they’re all at a high level. He has ice in his veins when the game means the most, his competitive level is through the roof, but his disposition is calm, which has a major impact inside the locker room. Your feeling when you’re in the locker room with Drew is that you’re never in trouble. You’re never nervous, you’re never in trouble, you’re always in control of the situation. He reminds me of these elite golfers, to be honest with you, that the higher the stage, the more calm they are, and he has the ability to do that. It’s a very, very unique talent.”

Hitchcock noted that Kings-Blues games – noted for their “sandpaper” style – are simply “fun.”

“They’re fun to coach in, they’re fun to play in, they tell you a lot about your team at the end of the day,” he said. “Both coaches believe the game should be played a certain way, and it’s who can sell it the hardest to their players and get them committed, but man, they’re good games. They’re so much fun to coach in.”

It might be easy to say when he’s not being shadowed or honed in on by Ryan Reaves, but captain Anze Kopitar agreed that games between the two 1967 expansion clubs are good games to be a central figure in.

“Yeah for sure,” he said. “I mean, I think especially the last few years when we’ve had some pretty good playoff battles and everything, I think that intensity ramped up a little bit and that’s why it’s fun to be a part of these games.”

Darryl Sutter, on St. Louis’ evolving style:
A little personnel change. You know, I think David Backes, Troy Brouwer, Steve Ott – we saw Fabbri last year, we saw Schwartz, I believe. He got hurt or injured quite a bit, but we saw them, and then Perron, we know him, obviously. Yakupov. Defense is still the same. It’s probably a different type of forward group than we’re used to seeing. [Reporter: Maybe not as many as those big battles.] We’re not, either. Look at our team – we’re not that type. That’s old, too. We don’t have that, if you look at that in our lineup, too. It’s still very much two structured possession teams, right? Very much so. The defense can carry the mail very much.

Anze Kopitar, on whether he expects a heavy, physical game against the Blues:
Yeah I think so, I don’t think it’s going to change a whole lot. Guys like Backes and Brouwer and Ott out of their line-up, [those players are] certainly grit guys and physical guys, but you know guys coming in and they’re going to be a little bit more of a speedy team, maybe a little bit more skill, but I don’t think our team plan should change for that matter. We just got to play our game and I’m sure it will be a physical one tonight.

Kopitar, on what positives can be taken from the last four games:
Well I don’t think by any means we’ve really pitched a complete game yet, but we’re finding ways to win and I think that says a lot about a team especially early in the season, you know where you’re maybe not as sharp as you want to be but you’re still winning games. Certainly taking the positives in that but we still have to build our game and make it, obviously, as perfect as we can.

Alec Martinez, on whether Kings-Blues games are fun to play in:
Yeah, for sure. These guys are one of the top teams in the league and we certainly have a history with them the past five, six, seven years. We’ve met a lot in the playoffs and things like that so they’re always high energy games, fun to play in, you know they always come out really hard in this building and this building is really loud and a tough one to play in and you know it’s going to be pretty physical. I would agree that these are the games that you want to play in.