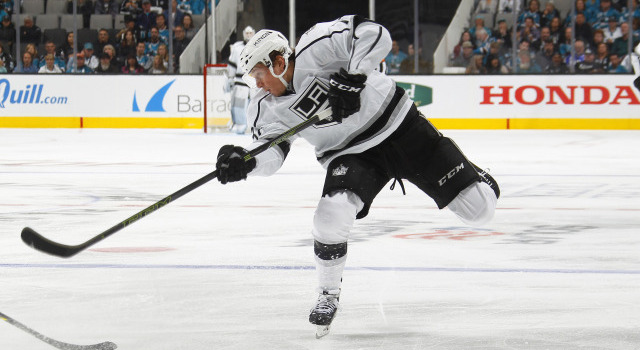 As much as we’d like to believe in the predictive ability of certain advanced stats, there’s simply no way to foretell the immediate future in any definite sense. Sure, the Carolina Hurricanes may have a league-low 947 PDO (What is PDO?), and it may be a safe bet to project them going on a stretch of, say, five wins in seven games, but is anyone laying money on them beating the New York Rangers in their home opener tonight?

And just as it was likely that Tyler Toffoli would increase his 5.6% shooting percentage very, very soon, was there still a better than 50% chance he’d do so against the Nashville Predators on Thursday?

Regardless of any probabilities, yes, Toffoli did score against Nashville. That he’d soon embark on a hot streak (or at least raise his early season, small sample size shooting percentage) was a safe projection to make. Likewise, not even Mario Lemieux topped 28% shooting in any season, so now might be the time to be wary of Tanner Pearson – who entered last night’s game shooting a crisp 34% – if you’re among those who take part in daily fantasy games.

While Toffoli waited until the seventh game of the season to score his first even strength goal of the season – his tap-in came immediately at the conclusion of a power play, and he was on the ice with the re-formed second power play unit – it wasn’t for a lack of good looks.

“I thought I was getting a lot of chances to be honest,” he said. “I thought last night I was getting a lot again, and I think that’s kind of the way it goes – you score a goal like that. But as long as I’m getting the chances and making plays and getting to the net, that’s kind of what matters, and at some point they’re going to start going again.”

With his six shots on goal Thursday, he’s now on pace to register 281 shots, which would best last year’s career high of 213. He’s been a relatively high-volume shooter who has amassed a solid 12.0% percentage in his career, a number he could raise if he continues to drive to the net and pay a price to score goals, as he did against the Predators.

He wasn’t alongside Dwight King and Anze Kopitar when he beat Pekka Rinne from close range; instead, he was still with the second unit, skating opposite Dustin Brown on a line centered by Nic Dowd. Jake Muzzin and Alec Martinez were the defenders, a different look than those used in previous games, when Pearson and Gilbert were part of Dowd’s unit, and Toffoli and Muzzin up alongside Kopitar, Jeff Carter and Drew Doughty.

The second unit, which has scored three of the team’s four power play goals this season, has found success in “just getting the puck to the net,” Toffoli said, along with a different look from the defensemen.

“Now that we’ve switched it, having the two right D and the two left Ds, being able to get that one-timer is definitely a factor that teams play into,” he continued. “I know that we really pay attention to that stuff. Just trying to open it up and get the open shot, and I think Brownie did a great job of screening the first goal and me just going to the net for the second one. Just those little things that you need to do to kind of have that five-on-five mentality. I know we’ve talked about it a lot. Not just myself, but when you can do that stuff on the power play and you’re a man up, you’re bound to score.”

Tyler Toffoli, on whether he’s ever seen such continued overtime success:
No, but it’s good. It just showed that we’re sticking together and finding a way to win games, and coming back, obviously you want to be able to keep the lead – a couple times there we lost it – but being able to show that we can come back and stay together and score the goals at the right time is what we’re looking for as a group.

Toffoli, on inserting himself into and being the target of chippy play:
It’s just the way to kind of stay in the game, and obviously when you’re going to the net hard there are going to be little scrums. You see it from everybody on our team. That’s the way we play – we play on the edge. I’m just trying to get to the net and not cause anything, but trying to do whatever I can to score.

Toffoli, on playing with Nic Dowd:
We played a little bit last year together when he was up. He makes those little plays. He’s doing a really good job, and he’s just got to keep going. We’ve just all got to keep going and scoring, shooting on the power play. That’s key, I think. The more we shoot, like I said, eventually they’re just going to start going in. Kind of converge on the net – that’s what we’ve been talking about. Last night was just a good example of getting the puck to the net.

Toffoli, on how much improvement Dowd has shown from last season:
He came into camp and looked good. I think he put in a lot of work in the summer. His skating, he’s a lot quicker. I think he’s always been able to make those little plays, but the work he did in the summer has definitely paid off.