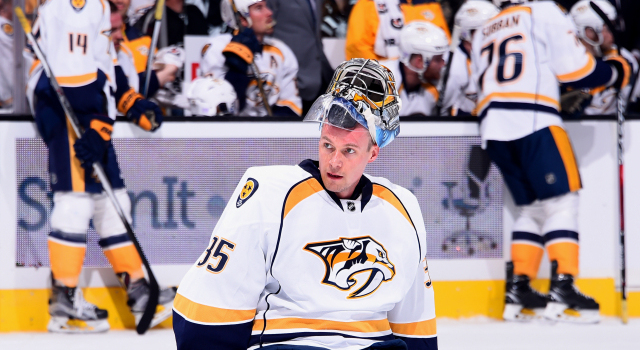 Peter Laviolette, on whether he was pleased with the team’s rebound effort:
Yep. Thought our guys played hard.

Laviolette, on how the Predators can do better in possessing the puck in overtime:
It goes to the faceoff, whoever wins the faceoff has the opportunity to keep possession of the puck. They grabbed it on the opening faceoff and we just had it for a bit there in the first minute then we went to the penalty kill for two minutes where you’re just defending so…

Laviolette, on whether or not the Predators are snakebitten early on:
Yeah I mean it’s not coming easy right now as far as offense and the goals are just hard to come by right now for a lot of our guys but I asked for a better effort and the guys gave that today. In the end we have to find points, we have to find wins, and we have to continue to push for that.

Roman Josi, on whether he was pleased with the team’s effort:
It was a fast game, a physical game, yeah I wish we could have gotten the two points but I thought it was a good effort.

Josi, on whether or not the Predators feel snakebitten early on:
Yeah, maybe a little bit. Like you said, there’s always times when everything goes in and you get the bounces and sometimes you don’t and that’s all going to even itself out. You can’t control that, all that we can control is our effort and I liked that tonight.

Josi, on the team’s mindset through the first seven games of the season:
Yeah, you want to win. There’s always frustration when you don’t win. We know there’s a lot of things we can do better but it’s still early and you can’t get too frustrated. There’s a lot of season left but we have to work on some things and hopefully get better as the season goes on.

Ryan Johansen, on the team’s overall effort against the Kings:
We worked really hard tonight, it was a good response for our club.

Johansen, on whether or not the Predators feel snakebitten early on:
Yeah, that’s hockey. I mean that’s what it feels like. Definitely. I haven’t scored yet, a couple others haven’t scored yet, it can get frustrating but we just gotta focus on what we can control. Just keep putting the work in and hopefully the bounces come and we get some breaks.

Johansen, on what the Predators can do to better their OT possession:
I think you just said it, faceoffs. I think we lost every one in overtime. 3 on 3 if you lose the faceoff it’s all about positioning so you don’t even go at guys you just protect the middle of the ice and it’s tough to get possession back. So those faceoffs are so important, and obviously with their goal they had possession near the end and were able to make a play.