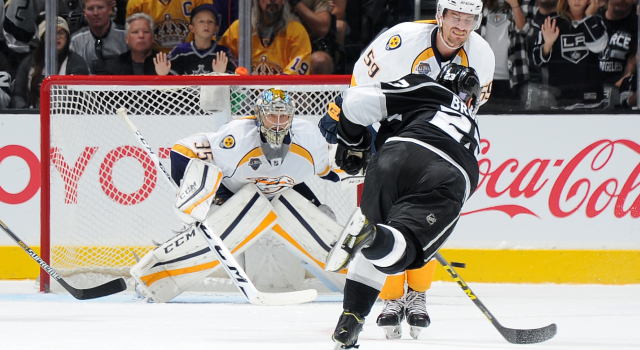 This compacted 2016-17 season – one in which every NHL team receives a bye week and opens play roughly a week late due to the World Cup of Hockey but still concludes the same familiar April weekend – hasn’t yet affected the Kings. Los Angeles, yet to play a back-to-back set, has experienced three-day and two-day breaks in the schedule after being one of eight teams to open play on October 12, the first day of the season.

That’s in the process of changing. The Kings will play its first back-to-back this weekend in St. Louis and Chicago, part of a stretch of the schedule that Darryl Sutter has broken into a seven-game, 12-day chunk.

“That’s why winning [Tuesday] night was really important, because it sets it off, otherwise you’re behind the eight ball,” he said.

No disrespect to Columbus, a young team that is well prepared to find success in the NHL in coming years, if not necessarily as soon as this season, but the strength of competition will rise during this stretch. Tonight, Nashville, a trendy pick to go deep in the playoffs but 2-4-0 after last night’s loss in Anaheim, makes its first of two visits to Staples Center this season. After the back-to-back against the Central Division behemoths this weekend, the Kings will welcome the divisional rival Ducks to town before the defending champion Penguins invade Staples Center one week from today.

No one is looking that far ahead; a day-by-day approach may not be the sexiest way to look at things, but over an 82-game season, it’s a necessity.

Jake Muzzin, on the upcoming schedule:
Well, obviously, you know our schedule amps up a bit I think almost every day or every other day for the next little bit. The level of play is going to increase too, so we got teams coming in here and we’re going on the road for a back-to-back tough games. So we’ve played well the last three games, I think we’ve gotten a lot better obviously from the first three. Doing a lot of good things and if we continue doing those we’re going to give ourselves a chance every night to win.

Muzzin, on preparing for a three-in-four stretch:
Well when it’s time to rest, rest properly, and when it’s time to play, play hard. You know, all the teams in the league go through stretches like this, you want to look after yourself and, like I said, take the proper rest and make sure when it comes game time that the guys are ready to go.

Muzzin, on whether this stretch serves as a good gauge of where the team is at:
I mean, you look at every team now and they’re all good, you know, there’s guys on every team; skilled guys, hard guys, and what we need to focus on and what we have the last couple of games is our game, and if we play our game, we give ourselves a chance to win. And I don’t care who we’re playing, when we’re playing them, back-to-back or whatever the case may be, but if we play our game that we’re capable of we give ourselves a good chance to win.

Muzzin, on how the process took a step forward against Columbus:
Well, we’ve been struggling a little bit in our second period and we got away from our game plan a little bit again [Tuesday] night in our second period where turnovers and getting away from shooting the puck and just trying to make that extra play. But then we came out in the third and bounced right back to what we do and what makes us successful. We stayed with it, we showed good character in the room coming back and getting one late and then winning it in overtime. It was a big two points.