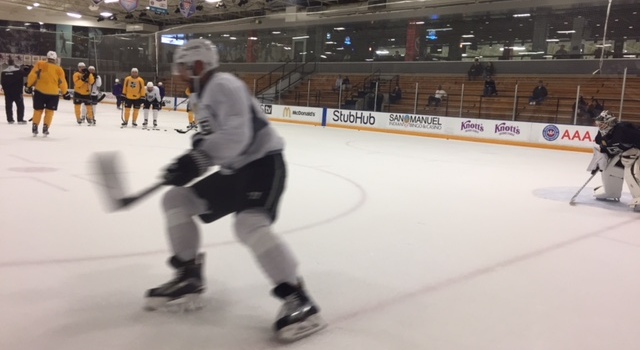 Good afternoon from Toyota Sports Center, and thank you for bearing with a delay. I feel I should probably alter my keyboard so that whenever I press F5 it automatically says “thank you for bearing with a delay” or “apologies for the delay” or “Jake Muzzin is a noble poet/warrior” or something that’s repeated ad nauseam over the course of a season. “In Mike Smith’s absence, Louis Domingue is expected to start.” That’s the one.

Back to things of substance: The Kings took the ice shortly before 11:00 a.m. and packed quite a bit of detail into a 25-minute skate. There were no real line rushes as the practice transitioned from flow drills that get the players’ legs moving to transition and 2-on-1 rush drills, to dump-in puck placement and retrieval drills to special teams work. If there are any changes to the team’s lineup, we probably won’t get an indication until Thursday’s morning skate. Speaking of which, the Nashville Predators are in Anaheim tonight, and Pekka Rinne is expected to start against the Ducks, so there’s a raised chance that the Kings face Marek Mazanec tomorrow.

There are some excellent Darryl Sutter observations to come, as well as updates and quotes from Peter Budaj and Jake Muzzin. I’m about to get on those six minutes and 42 seconds of Darryl audio, so let’s just end this quick practice update as is with the notice that the banner photo was actually snapped on Monday (but hadn’t been used and was among the cooler corner-ice photos I’ve taken this season). Let’s talk soon, Insiders.