Lindback to be brought in on PTO; will join Reign 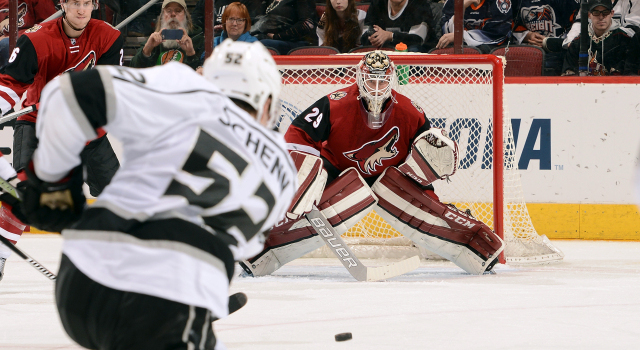 After an Expressen report this morning indicated that goaltender Anders Lindback would “sign a short-term contract,” according to Google Translate, a Kings hockey operations source confirmed that Lindback would join the organization on a PTO and would report to the Ontario Reign.

This is, of course, related to the spate of injuries the Kings have experienced in goal. Because of the groin injury that is expected to keep all-world netminder Jonathan Quick out of game action for roughly three months, and because of the less serious groin pull suffered by Jeff Zatkoff during Saturday’s morning skate that should sideline the back-up for around one week, the two goaltenders that opened the year in Ontario, Peter Budaj and Jack Campbell, are now up with the parent club, which has forced the team to look outside of the organization for solutions in goal at both the NHL and AHL levels. On Saturday, goalie Jonah Imoo started in net for the Reign, while his father, Kings goaltending development coach and 46-year-old former Japan international, Dusty, served as an emergency back-up.

According to the hockey operations source, whether Lindback has his tryout extended will be based “on how he plays.” the Reign plays a three-in-three this weekend, with games in Cedar Park, Texas on Friday and Saturday and in San Antonio on Sunday. After a Thursday home game against Nashville, the Kings travel to St. Louis and Chicago for a back-to-back on Saturday and Sunday, so there are opportunities for all four goaltenders – Budaj, Campbell, Imoo, and now, Lindback – to have an opportunity to play amidst a truncated schedule. UPDATE, 12:20 p.m.: Lindback must first wait for his visa to clear, which generally takes 7-10 days. His opportunity to play this weekend appears to be in doubt.

As reported yesterday, Los Angeles, given the team’s current circumstances, isn’t expected to trade for a higher-profile goaltender due to salary cap constraints.