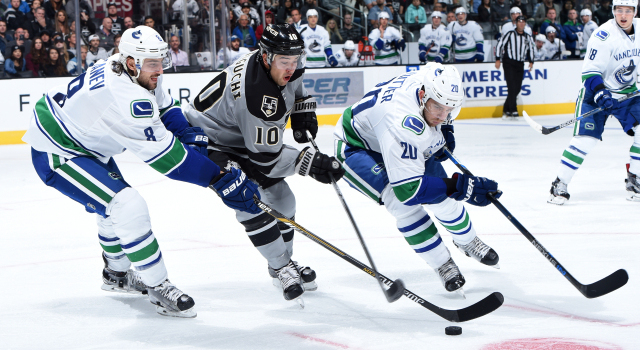 On the team’s performance in the shootout win:
It was a really solid game. It was the best three periods that we’ve put together in one game all season.

On Dustin Brown’s performance:
He was a physical player, clearly. Strong on the walls and strong on the puck, If he does that, he has a chance to have individual success.

On the Andreoff-Dowd-Brown line:
We need four lines, as I’ve said. The third and fourth lines have got to score goals and check and be physical.

On Peter Budaj’s performance:
I think he gave us a chance to win. A couple of goals – he makes a great save on their first goal. I think it was on Hansen cutting in, and Muzzin loses his coverage, so it’s an empty net, nothing you can do about that. I think the second goal was a rebound off to the side that we got caught in a change and their goalie moved the puck up. There’s not much you can do about that one. And the third goal was a screen, and he’d probably like to stay up on that to take away the short side.

On whether the career route Budaj has taken over the last several years:
He had a really good year in the American Hockey League last year, so he earned the opportunity to get a chance to play in the NHL this year. He earned a contract and earned that opportunity, and I think he was really disappointed a week or so ago when he went unclaimed on waivers. Hopefully he’s trying to prove a point to everybody in the league. He’s a proud guy.