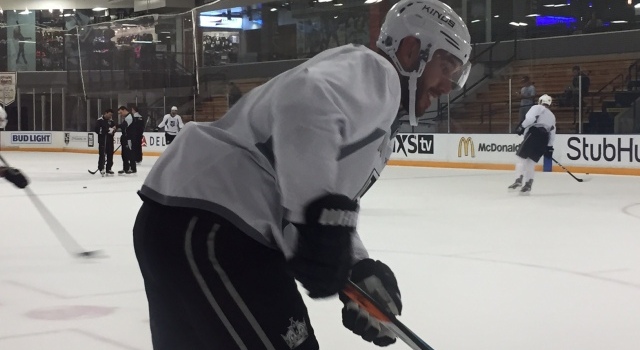 Good afternoon from Toyota Sports Center. The Kings took the ice shortly before 11:00 a.m. and did not show any changes from the lineup used during Thursday’s win at Dallas:

-In case you missed it earlier, Jeff Zatkoff suffered a groin injury during the morning skate. Peter Budaj is expected to draw the start against the Canucks. We’re expecting to hear that Jack Campbell will be recalled to back him up. As of now, there’s no word on whether it would be under emergency circumstances, or whether there would be a corresponding move.

-Teddy Purcell, Jordan Nolan and Matt Greene remained on for a touch of extra work and aren’t expected to play tonight.

-The Canucks announced on Twitter that Jacob Markstrom will draw the start.

Looks like #Canucks are making a few line changes tonight.

-It’s a Saturday night home game, so the Kings will wear their 50th anniversary jerseys and host Jaroslav Modry Heritage Night with a ceremonial puck drop at center ice. It’s a Hockey Night in Canada game, so be aware of the 7:09 start time.

-More to come today, including Darryl Sutter quotes and a story on Brayden McNabb, and how some of his physical play will continue to force him to defend himself, as it did in Thursday’s win over Dallas. More to come throughout the day, Insiders.