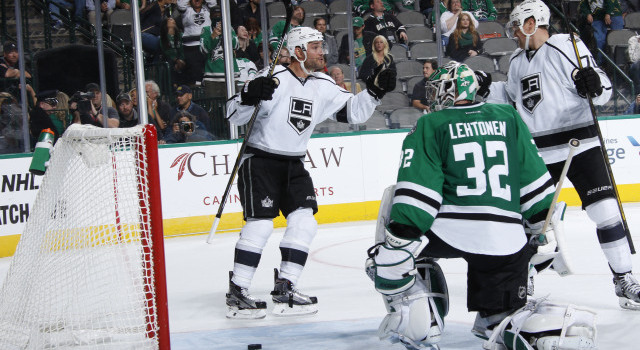 On an emotional and particularly chippy Thursday night in Dallas, the Kings staked themselves to an early lead, finished off the first two periods strong and played a complete 61:20 in earning their first win of the season, a much-needed 4-3 overtime triumph over the team that recorded more points than any other Western Conference team a season ago. Jamie Benn was his usual self, and Jason Spezza had a significant impact in the game, but Los Angeles followed the course it had charted Thursday morning, using its own possession strengths to work disproportionately in the offensive end, thus clipping the wings of one of the league’s top skating teams while taking a step toward the style of hockey that has generated Kings success in the past. How do you limit the effectiveness of someone like Tyler Seguin? Make him play defense. Dallas has more recently emerged as among the top possession teams in the NHL, and Los Angeles generated more shot attempts at even strength by a near two-to-one margin, and, during an early third period stretch of effective forechecking, forced a collection of futile Dallas zone exits that served as the equivalent of trying to merge from the carpool lane to the Venice/Washington Boulevard off-ramp while navigating the 405 North on a Friday. This came after the Stars had taken a significant early season step themselves with a win over Nashville two nights prior. 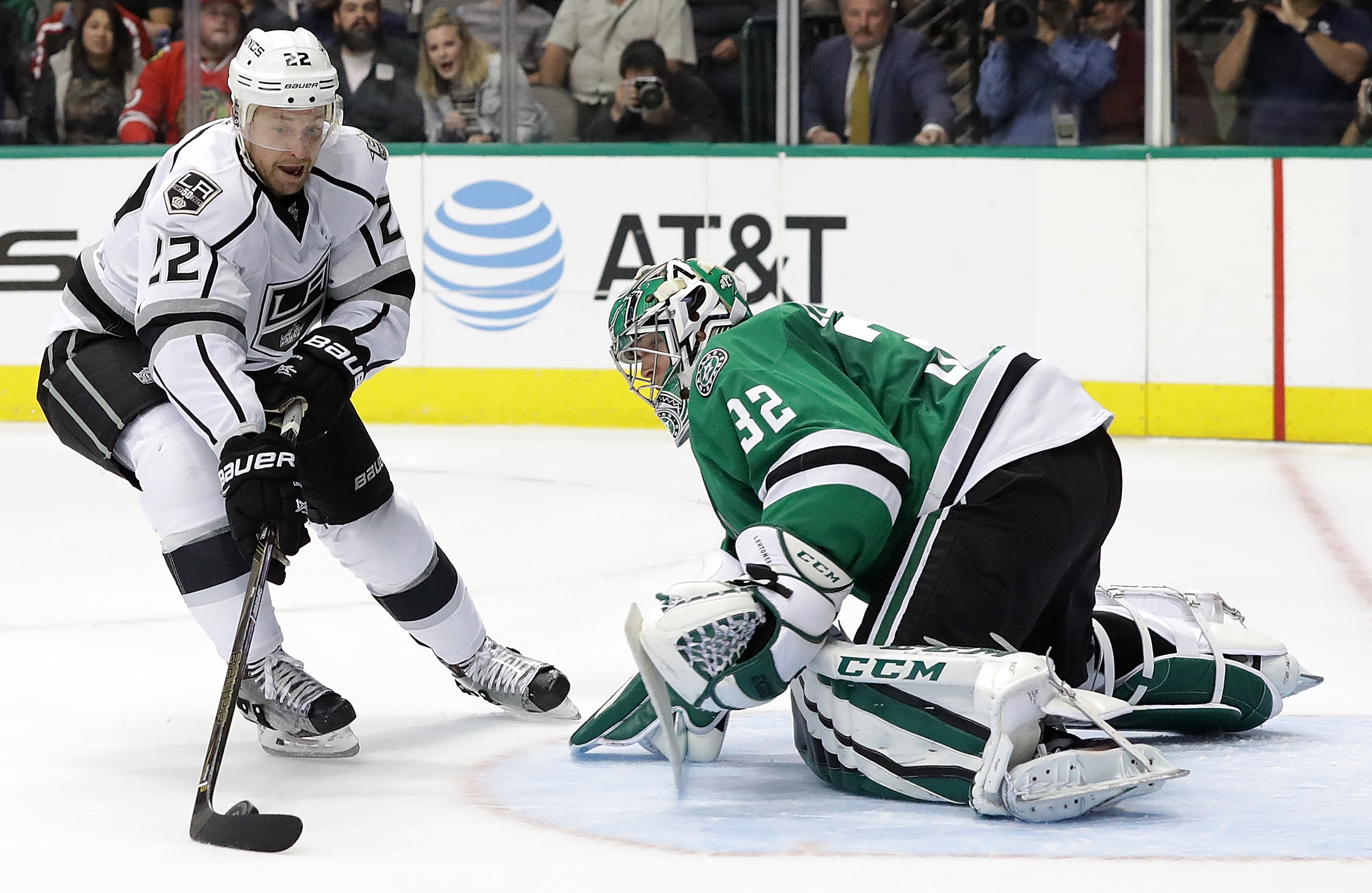 So, that second period. In a 20-minute stretch in which Brayden McNabb legally but heavy-handedly removed Patrick Sharp from the game with concussion-like symptoms by virtue of a thunderous body check and Patrick Eaves was lost with a lower-body injury, Antoine Roussel picked an inopportune time to suffer one of his meltdowns as Dallas was forced to basically roll three lines when the agitator was issued 16 minutes of penalties during a mid-period stretch of running around. He personally accounted for six minutes of Los Angeles power play time in the game; those were six minutes in which some of the league’s elite offensive players were placed primarily in defensive situations. There were raised emotions generally associated with February, March and April, and Los Angeles weathered those situations admirably – credit McNabb for using his skate to block a centering feed on the same penalty killing shift in which he issued the check on Sharp – and regained a late lead when Devin Setoguchi impressively faked a dump-in before hitting Tanner Pearson in stride, allowing the 24-year-old to finish off the play by burying his own rebound to record his third goal in just five periods. 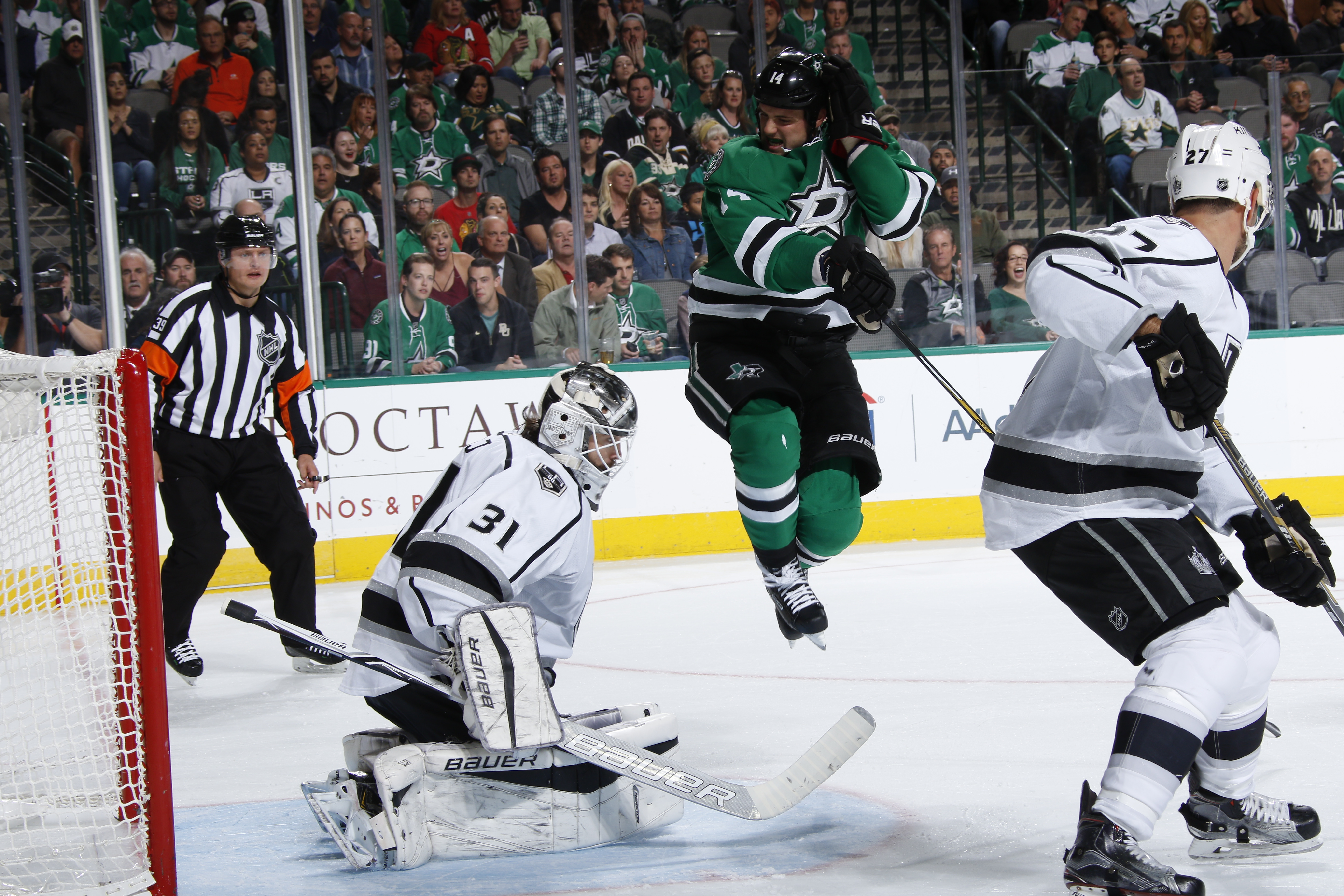 Los Angeles improved to 13-3 in overtime since three-on-three play was implemented, though there was controversy in the way the game ended, according to Lindy Ruff’s post-game comments. I haven’t viewed the game-winning goal enough to weigh in with whatever my own observations are worth – I saw the goal in real time on a distorted monitor outside the Kings’ dressing room, and my initial thought, prior to the NHL’s Situation Room email, was that the play was being reviewed because Pearson was nearly offside – and because of the DDoS attack on the internet this morning (not something I expected to type today), this is the only view of the game-winner that I’ve been able to locate, and the GIF angle doesn’t really show anything conclusive one way or the other, though it does appear that Pearson’s right elbow glances across Kari Lehtonen’s mask. The limited-view reaction is that Pearson’s contact, following a very brief foray into the blue paint, came while the forward was a smidgen outside of the crease. To me, that’s incidental contact, but again, I’ve only studied the one angle currently available, which affords a limited understanding of the play. It wasn’t as cut-and-dry as the previous interference that negated an Alec Martinez power play goal. According to the NHL, the referee “confirmed no goaltender interference infractions occurred before the puck crossed the goal line.” 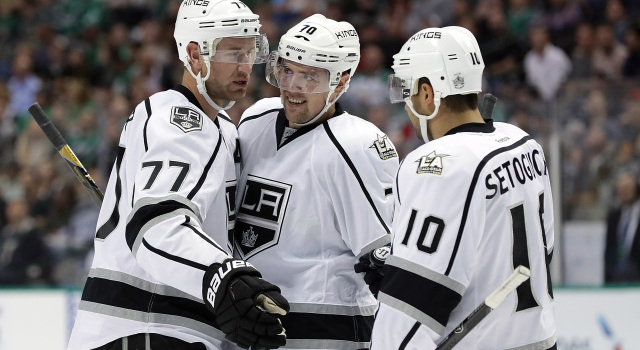