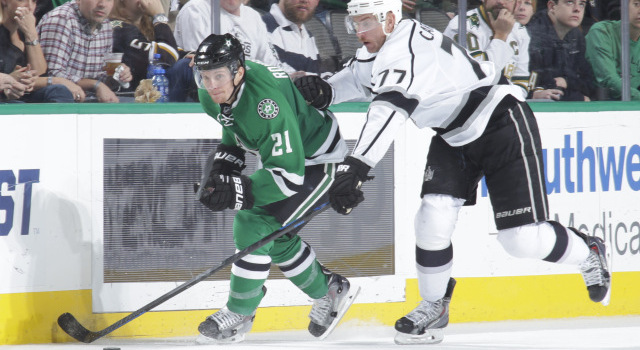 The Dallas Stars have scored 764 regular season goals since Lindy Ruff took over as head coach prior to the 2013-14 season, 33 more goals than those scored by any other team over that span.

For a Los Angeles squad that’s looking to improve its checking and continue to refine its detail in the wake of a 6-3 loss to Minnesota on Tuesday, that’s a significant challenge.

“Yeah, they’re a high-powered offense, so the blue lines are really important against a team like this,” Dustin Brown said. “Making them play in their D-zone, they’ve been one of the higher scoring teams in the league for a couple years now. You’ve got to make some of those guys play defense. They don’t like it very much, but when you give them time and space on the other side of the puck, they’re going to make you pay. “

But against the Wild, the Kings were able to get pucks deep in the offensive zone and maintain their zone time. It led to a 72-35 shot attempt advantage and a positive discrepancy in scoring chances, though not the first win of the season.

“I think we had more chances and more offensive zone time, but I think it was a result in putting pucks in good places where we had a chance to get ‘em back,” Trevor Lewis said. “When we have that close support in the offensive zone, it’s easy to get pucks and get ‘em out and be able to get a chance, but when we’re just one guy and kind of spread out, that’s when the bad things happen. So we’ve just got to make sure we’re all close together in the offensive zone.”

Such detail will be necessary to win a road game against a Dallas team that by all accounts took a significant early season step with a 2-1 road win at Nashville two nights ago.

“Now we’re trying to remain consistent,” Ruff said. “I thought we got our play to a level where we got rewarded with a win, and now it’s consistently bringing that type of game.”

The Kings could certainly stand to produce a carbon copy of last year’s lone visit to Dallas on the Ides of March, a five-goals-on-22-shots performance in which they opened the scoring 23 seconds into the game and sailed to a 5-2 win against the team that ultimately led the Western Conference with 50 wins and 109 points.

Trevor Lewis, on the type of checking performance necessary against Dallas:
I think it’s five guys together all over the ice. I think when our gaps are off, that’s when they create the odd-man rushes, and obviously we have to be good on our forecheck. I think if we’re good on our forecheck and spend a lot of time in their zone, their offensive players can’t get as much going. We’ve just got to come out and establish that forecheck early, and make sure all five guys are working together.

Dustin Brown, on how to improve gaps in coverage:
Just helping each other out, really. If our defensemen are gapped out, it’s generally because our forwards are out of position. If we can, like I said, stay close together, that’s how you defend against a team like this. With the amount of speed and skill they have, there are going to be breakdowns that happen. You need to have the support in behind you to prevent grade-A scoring chances.

Brown, on cleaning up detail despite the overall shot attempt advantage:
We’ve been pretty poor in the second period. Whether it’s been – not a lack of focus, but a letdown or whatever after that first – I mean, we gave up one with 10 seconds left. That’s a big momentum swing for the game. They’re just little breakdowns. We just need to be consistent in cleaning that up.