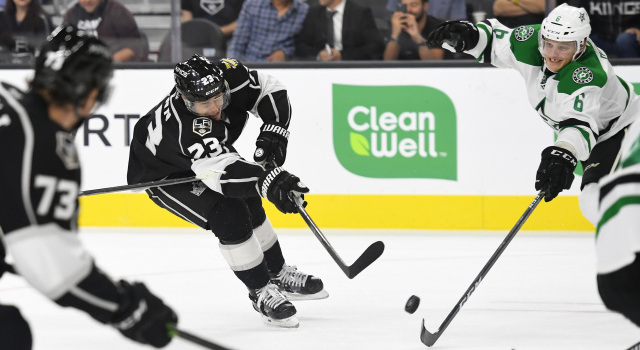 Good afternoon, Kings fans. Let’s get down to brass tacks.

-The Kings rolled lines towards the end of their morning skate, but they weren’t representative of what we’re likely to see tonight. Based on Tom Gilbert apparently taking an option, and Teddy Purcell, Jordan Nolan and Matt Greene remaining on for extra work, I’m putting my money on the team icing the following:

-Peter Budaj was the first goaltender off the ice and is expected to start in net. Today’s #LAKingsGoalieTweetOff winner was Jim Fox, who promptly retired from competition.

-Prior to his third period assist on Tuesday, Devin Setoguchi’s last NHL point came on an Evander Kane goal in a 5-4 Winnipeg overtime win over Colorado on March 19, 2014. He also tied up Matt Dumba’s stick on his first shift, allowing Pearson to scoop up the puck and fire away on a go-ahead goal 50 seconds into the game. “Not playing in a while, in order to get confidence, you have to be successful in what you do. I feel like my game is slowly coming together,” Setoguchi said. “There are times I can make better plays and hold onto the puck a little bit more and be a little more creative. That comes with confidence. … I have a short, limited time. I’m playing with two great players in the top-six; I need to try and do that every night. For me, tonight, it’s another chance to step up my game and try and create offensively, but be very defensively sound and play the way that Darryl wants us to play.”

-As for Dallas, Kari Lehtonen is expected to start in net. The team is coming off a strong 2-1 win at Nashville in which the team’s systems play really began to come together. “The first two games, there was probably more bad play than good play, I would say, through the six periods,” defenseman Dan Hamhuis said. “I thought we had a much better game in Nashville. Overall, team commitment was a lot better, and we looked at some structural things, as well. It’s an evolving thing. We’re always looking to get better, but I think after the last game we took a big step.”

-One last thing, and please believe me when I say that I’m not just sharing this as a corporate shill. But the FOX Sports GO app is fantastic, and you’ll be able to get crystal clear, HD-quality picture when connected to a wireless network, or, in many cases, a simple LTE connection. I was at a concert last Thursday without an internet connection and snuck to the back of the room to watch the ninth inning of Dodgers-Nationals Game 5, and was able to view every pitch with such perfect clarity that it should have been a FOX Sports Go commercial. Go download it; if you have a cable subscription, you’ll be able to watch all teams with FOX partnerships after viewing a short advertisement. OK, spiel over.

-Lots more to come from Dallas, Insiders. Enjoy your Thursday.