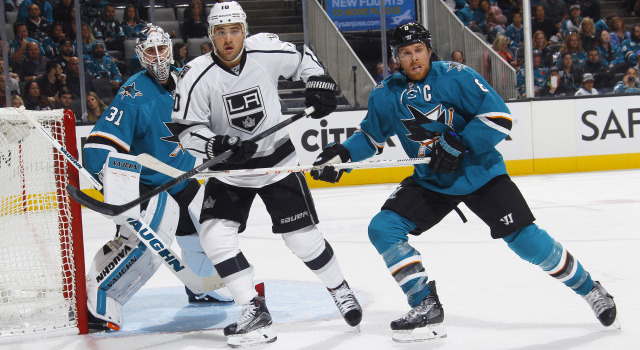 Devin Setoguchi, who was expected to serve as a similarly skill-setted player to Marian Gaborik and capable of slotting as an option in the team’s top-six during the Slovakian’s absence, was placed alongside Jeff Carter and Tanner Pearson in the latter player’s first game of the season on Tuesday. On his first shift, after Carter had won a faceoff, Setoguchi tied up defenseman Matt Dumba’s stick along the boards, allowing Pearson to pick up the loose puck, spin and beat Darcy Kuemper with an elusive wristshot that snuck inside the near post. He wasn’t credit with an assist – his first point in over two years would come two periods later on Pearson’s second goal of the night – but was able to influence a play that directly led to an early goal.

Of course, Setoguchi came to the Kings under unique circumstances. His ability to overcome alcohol abuse was well chronicled during training camp, and that he was able to earn a spot on the roster was among the most admirable developments across the league in the lead-up to the season. But now, three games into a season that to this point is yet to yield a Kings win, the story of his ability to crack the Los Angeles roster takes a backseat to the need for the right wing to do things that help his team win games. His performance on Tuesday represented a step forward, though Los Angeles did not pick up two points.

“I have a short, limited time,” Setoguchi said, echoing the acknowledgement that his presence on the club is essentially an in-season extension of the PTO he was offered to attend the club’s training camp. “I’m playing with two great players in the top-six; I need to try and do that every night. For me, tonight, it’s another chance to step up my game and try and create offensively, but be very defensively sound and play the way that Darryl wants us to play.”

Now that he’s been getting his skates underneath him, he’ll look to continue to provide dividends for a Kings team that needs him, which in turn will help his self-assuredness.

“Not playing in a while, in order to get confidence, you have to be successful in what you do. I feel like my game is slowly coming together,” Setoguchi said. “There are times I can make better plays and hold onto the puck a little bit more and be a little more creative. That comes with confidence.”

By and large, Los Angeles’ top two lines have been fine through the first three games of the season, even though there has been some mixing and matching of players as the team tries to catalyze its offensive output. Setoguchi spoke earlier today about his line’s play, and the process of improving, game-by-game.

Devin Setoguchi, on his line’s play two nights ago:
We obviously could’ve been a lot better in other areas of our game. The game was weird. We were more in the neutral zone a lot. But obviously, Pears made a great shot on the first one, Carts made a great play on the second one. We just need to make sure we’re forechecking as a five-man unit, creating turnovers and using our speed as a line to create chances.

Setoguchi, on whether there has been linear improvement from the start of training camp:
Absolutely. Exhibition, compared to regular season, it’s completely different, and you’re playing against top guys every night. When you’re in the top-six, you’re playing against their better players. It’s a different change from exhibition. But it’s just you being able to elevate your game and being confident making the plays – and making them – and not trying to play it safe and not do anything wrong.