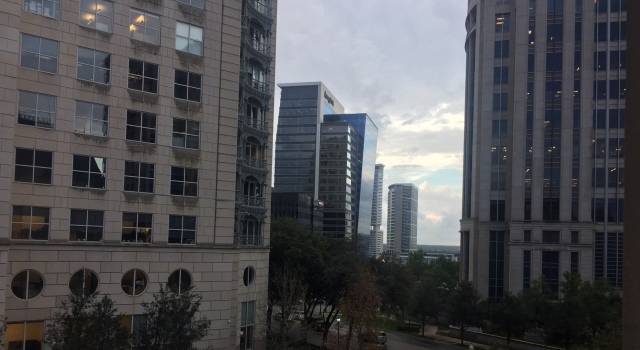 We’re now three road stops into the 2016-17 season, and not one Munters unit has been spotted in the wild. This is especially disappointing in Dallas, where one side of the hotel – generally the side that Insider HQ faces – looks out upon one of the prouder Munters units across the league. There is also, of course, the Glendale Gas Absorption Network, and the Nashville Evaporative Cooling Center, but then there are generic knock-offs that aren’t branded with the virtuous name of Carl Munters. It is on days such as Wednesday, when we deplaned to a stiff wind on a sweltering afternoon, that we offer thanks to Munters and his various cooling processes.

Dallas is a good place to spend an evening if you’re looking for a place to watch multiple sporting events at once. There are a number of sports bars on McKinney Avenue, which isn’t too long of walk from the team hotel. With joggers, dog-walkers, and a Whole Foods anchoring a relatively new condominium complex, gentrification has certainly come to the Uptown neighborhood, and several of us set up shop in one establishment to watch the Dodger game while Wings-Red Wings and the Presidential debate aired on nearby TVs. Once the Cubs widened their lead against Ross Stripling, we turned our attention to Patrick O’Neal’s iPad and were treated to Patrick Laine’s second and third goals of the night in Winnipeg’s impressive comeback. Sports, sports, sports, sports.

Time to pack up and head to the morning skate, Insiders. There’s plenty more to come from the American Airlines Center. Let’s talk soon.