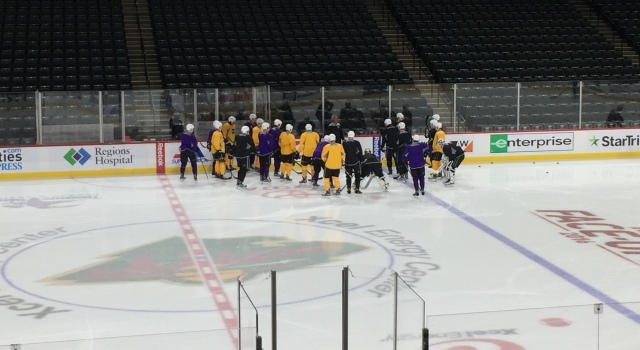 Good afternoon from the skies above Oklahoma. We’ve been told it’s a two-hour and 13-minute trip from the Twin Cities to Big D in advance of the Kings’ game against the Stars Thursday night at the American Airlines Center.

Back in St. Paul, the Kings held a practice at the Xcel Energy Center at 1:00 p.m. local time that was absent of outright line rushes, though the drills that were held didn’t show any vast changes from the forward lines shown Tuesday night against Minnesota. The team was barked at a few times early in the skate by Darryl Sutter and Davis Payne, but there weren’t any exchanges that were out of the ordinary. Sometimes when there are lapses in detail during practice, coaches convey that to players. It was another typical early-season, moderate-in-length practice.

One amusing late-practice snippet: Alec Martinez dropping to the ice late in the skate to perform push-ups. What was with the Willie Mays Hayes moment? Not holding a puck in at the blue line during a drill in which pucks were cycled around the boards to the point. He was in a bit of a competition with Drew Doughty, apparently.

After the skate, I spoke with Doughty in a one-on-one about the mood around the Kings’ room, his performance alongside Brayden McNabb on Tuesday, and any changes or tweaks in the team’s systems in the defensive zone. It’s a good listen: