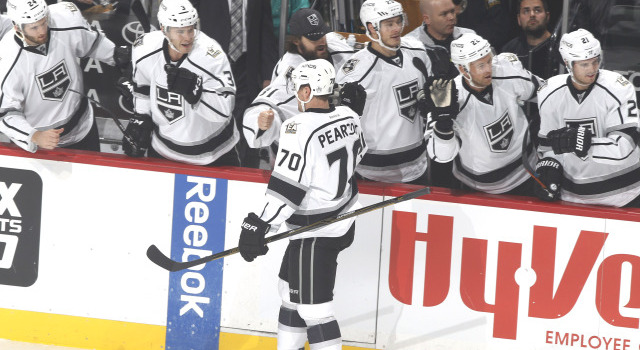 Anze Kopitar, on how the game got away:
Obviously it was the second period that got away from us again. I think first of all, not cashing in on that five-on-three, which was, what was it around, 45 seconds? That’s plenty of time to get a couple of really good scoring chances, and we didn’t do that, and then the game turns around and they score on the power play right away. I think it was more than just that. Obviously giving up six goals, it’s not the way to go, definitely. In the past, that’s not the type of game that we want to play, and we’ve got to tighten up.

Kopitar, on whether there’s any commonality from the three losses:
Obviously we have to check better, and everything that they get, it’s mostly off our mistakes, and we can’t afford that. Teams are good, if you do mistakes, they’re going to punish you for that. What we’ve been preaching all along the last few years, four or five years now, it’s not to give them a whole lot, but try to make them earn everything. We certainly haven’t been doing that, so clean that up again, and obviously score a few more goals ourselves.

Tanner Pearson, on generating scoring chances:
We were shooting the puck pretty good. We were cycling the puck, I thought, pretty well. It’s definitely something positive to take away, but at the same time it was too late for that to happen. We’ve got to start off there and keep that consistency throughout the game.

Pearson, on generating chemistry with Jeff Carter and Devin Setoguchi:
I think when you play with someone new, you want to communicate and feel it. It was actually the first time with Carts playing with Seto too. We know he’s a good skater and can shoot the puck and he’s got to be on the forecheck, so I think it kind of meshed and we had some good chances tonight.

Peter Budaj, on remaining ready as a backup:
Well, that’s our job, isn’t it? It’s a tough way to put it, but yeah, obviously when you have to go in as not a starter, it’s always a really bad sign. We didn’t play well tonight. We had a decent third period, but I think we’ve got to be a better team from the start.

Budaj, on his intermission routine before entering a game:
I think you try to warm up a little bit, and just get your gameday routine. I don’t know – I don’t quite remember. I don’t really put emphasis [on it]. You just try to get yourself mentally ready even though you are ready. It’s always different when you have to go in, so you’ve just got to get ready and don’t focus on the score, don’t focus on what’s going to happen, just try to focus on the next puck. I know it’s a cliché, but it is like that.

Budaj, on getting an opportunity to play with Jonathan Quick out:
I just try to do my job. I just try to stop the puck. Obviously it’s a tough situation. Jonathan is arguably the best goalie in the world. We miss him, but I think me and Zats are trying to do the best we can. Whenever I get a chance to play, I just try to put my work in practice, put my work in a game, and whenever I get a chance to play, I just try to help the team win a game. It seems like it’s like a cliché – we always say the same thing – but it is true. When you focus on a team and on the next puck, you can get yourself more into the game than if you just ofcus on yourself. We just have to get better as a whole team, as a group, because you win as a team and you lose as a team. We’ve just got to put this behind us. It’s a long season, but we’ve got to start winning. I know we have a great group of guys, hardworking guys, with a lot of leaders, so we’ve got to do what it takes and we’ve got to start being better.