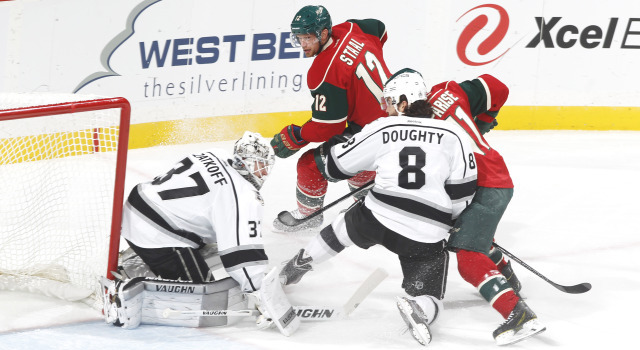 On a strong first shift of the game:
I thought we had a pretty good first period. [Reporter: Three pipes, I think.] Three posts, yeah.

On where the game got away:
Well, you’d like your power play to click, but that only would count for one, wouldn’t it? There were saves to be made there that weren’t, and I’m not sure which team had more scoring chances tonight.

On whether he was happy with the team’s efforts to generate shots and scoring chances:
Yes. [Reporter: What was it about the team’s play with the puck that you liked?] I thought we had the puck a lot. They didn’t have the puck very much. When they did, it just went in the net. Hey, when it’s all said and done, you’re a little bit too philosophical about all that [road apples], really. They scored a goal with 10 seconds left in the first period and we made a line change, and the guys going on the ice certainly knew how much time was on the clock, and one guy went behind the net and skated up the ice, passed it to them, they went down and scored with 10 seconds left. That’s an error from a veteran defenseman. That makes it 1-1, if he doesn’t make that play, after the first period, and we’ve hit three posts and you’ve outplayed the other team. That’s a bad play. It makes it 2-1. And then there are two faceoff goals. One’s a high-tip goal that the goalie probably – that’s a tough goal. But two of them are faceoff goals. You understand when you’re out there against good faceoff teams you’ve got to at least tie. You can’t lose clean.