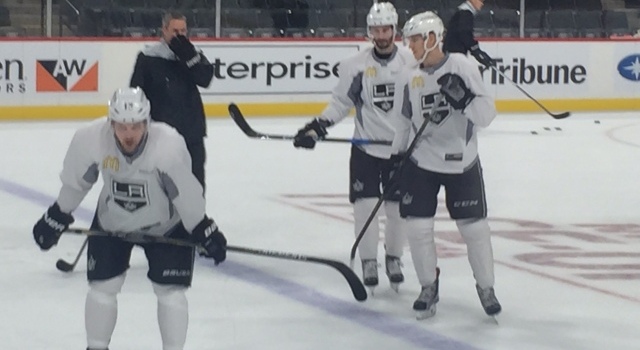 Good afternoon from the bowels of Xcel Energy Center, where both the Wild and Kings have concluded their morning skates and are in the process of returning to their residences and hotel rooms to catch some shuteye in advance of tonight’s game (5:00 p.m. PT / FOX Sports West / FOX Sports Go / KABC 790 / I Heart Radio).

The Kings held a full skate and aligned as such:

-Jeff Zatkoff left the ice first and is expected to start in net against Minnesota. Kyle Clifford, Teddy Purcell and Matt Greene remained on the ice for extra work and are not expected to play tonight.

-On the McNabb-Doughty partnership, I asked Darryl Sutter about the elements in McNabb’s game he liked and the elements he didn’t like from the time the two were paired together last season. “I think what he can continue to work on is playing against top players,” Sutter said.

-Minnesota is turning to Darcy Kuemper, who has had success against Los Angeles in his NHL tenure.

Boudreau noted that he’s not particularly interested in those splits, though. “I don’t look at any of his numbers. I know he’s played good against L.A. because somebody told me that, but it wouldn’t have mattered if he was 0-18. He was playing tonight.” As has been noted, Kuemper is an alumni of the ECHL’s Ontario Reign, with whom he posted a 1.74 goals-against average and .941 save percentage in eight games in the 2011-12 season.

-More to come shortly, including Sutter quotes and some words from Tanner Pearson, Nic Dowd and Tom Gilbert. Thank you as always for reading, Insiders.

It appears Dowd, Pearson, Gilbert in, Purcell, Clifford, Greene could be out. pic.twitter.com/cvptd4ZAlI