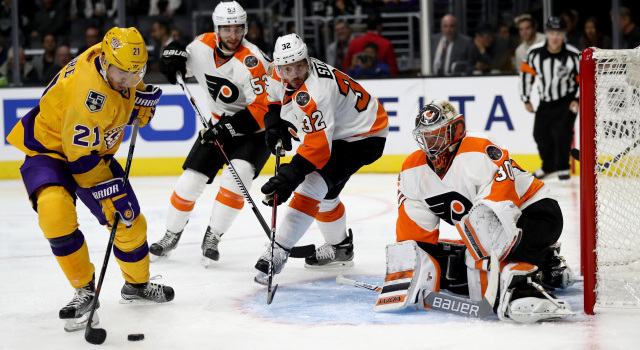 A funny thing happened en route to the Kings’ 0-2-0 start: They’ve been out-shot.

Let’s get the disclaimer out of the way first. Team stats, two games into the season, are more or less pointless. No real stock should be placed into any cold, hard data until the season is several weeks old. That’s not to say that there aren’t concerns on the team’s start, but rather that the data derived from available games comes from too small a sample size to build firm hypotheses from it.

On the other hand, the Kings have been out-shot 61-47 through two games. They have played two quality teams, yes – the Sharks are among the West’s top teams, and the Flyers are a rising team in the East – but have been outshot by an average of 7.0 shots per game, ranking 24th in the league in shot differential.

Los Angeles’ shot differential ranking in each of the last five seasons: first (+4.5), second (+3.9), third (+5.4), third (+4.9) and sixth (+3.2). They’ve been a top possession team in both the later stages of Terry Murray’s tenure and throughout the entirety of the Darryl Sutter era. One clear advantage that the Kings have held over their opponents has been their structure, and with that, their pace – “pace” is different from “speed” – and ability to exit their zone efficiently and own possession in the attacking end. Over that five-year span, they’ve been the league’s top possession team.

This morning, I asked Darryl Sutter if there has been any sort of staple between the first two games that has influenced the lack of scoring. He replied with “shots.”

“Without a doubt, not enough,” he said. “I mean, if you look at our forwards, Tyler scored a power play, our other forwards haven’t – it’s strictly based on shots. Leading the league in shooting percentage is great, but that means you’ve got to score lots, too. Guys who get more shots are always better. Tyler in the first game had, I think, five shots. We’ve got guys in two games with one or none. You can’t get rewarded that way.”

There are eight forwards who’ve taken as many as three shots on goal during five-on-five play. Tyler Toffoli has six, while Anze Kopitar, Devin Setoguchi, Dustin Brown, Dwight King, Kyle Clifford and Trevor Lewis have three apiece. If you’re wondering why Teddy Purcell has skated as an extra over the last two practices, combine Sutter’s observation with the fact that Purcell is yet to record a shot on goal in any situation through two games. It has translated into production: the Kings are yet to bank on a goal from one of their forwards at even strength this year.

Again, the sample size means that there’s nowhere near enough data to form meaningful observations, but through two games, the lack of detail has led to a surplus of time being spent in the defensive zone, which keeps the team from getting on the attack.

“Goaltending’s been good,” Drew Doughty said. “We just need to clean up a lot of things. We aren’t playing well in our defensive zone. We’re making too many turnovers. We’re wasting a lot of energy in the D-zone because we’re in there so often, and that makes us not able to create chances in the offensive zone. There are a lot of things that we need to improve on. We’ve addressed them and we all know what they are, so we’re just going into Minnesota, looking for a big win.”

Drew Doughty, on the lack of zone time:
It’s a few different things. Right off the bat, it’s not being on your man and stopping the puck trying to create a turnover, and then when we are creating those turnovers, we’re not making good passes to break it out, and if we do have the good pass, then we’re not the next pass to break it out. It’s more so just transition, I think, than everything. I think we’re doing an OK job at defending, but when we get that puck on our stick, we’ve got to have the poise to make the play to get us in the other zone.

Doughty, on whether three full days between games is “weird”:
Yeah, I don’t know if it’s ‘weird.’ It’s probably nice. The guys got some good rest yesterday, just got to watch football. We came here, we were determined to have a good practice, and I thought we had a good practice, and now it’s just get on the plane and look forward to tomorrow’s game.