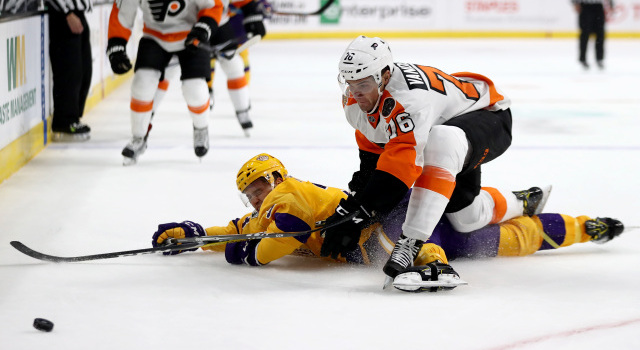 Dave Hakstol, on the success off the Konecny-Couturier-Voracek line:
I think it’s all those guys, a little bit of chemistry together. (Couturier’s) the anchor of that group up the middle. He does a lot of work up and down the ice, 200 feet. The other two guys on either wing are making a lot of plays and Couts scored a couple big goals for us tonight but I really like his play as the anchor of that group.

Hakstol, on the Flyers holding off the Kings in the first period:
They came hard. Give a lot of credit to them. They came hard especially that first 10-12 minutes. We didn’t skate, we didn’t make a lot of plays. … I thought we kind of regained our footing in the last maybe 6, 7, 8 minutes of the first period and we were able to get going in the second.

Hakstol, on turning the game around in the second period:
We got a couple of good saves, the game was still 0-0. The first goal of the game was big for us. We felt like coming out of the first period we had started to skate, started to play a little bit better and do a few more things positively with the puck. The play on the first goal was good patience, a good play for us, and we just carried it through from there.

Hakstol, on the Kings putting pressure on goalie Neuvirth:
This team puts a lot of pucks to the net and those pucks come with traffic. I thought he did a good job. Some of those high tip plays that they use, the change of direction 15, 20 feet out front of the crease, those are hard to handle. Neuvy did a good job, he had a good night.

Shayne Gostisbehere, on taking a skate to the face in the first period:
I just looked up and something hit me and I just checked real quick and realized I was leaking a bit. God was with me on that one, thank him for that.

Gostisbehere, on the Flyers pushing through a slow start:
I think that’s what our team’s been focusing on most is our starts. We haven’t had too many good ones there in the preseason but it says a lot about our team the way we battled back and we stuck to our system and we got the two points.

Ivan Provorov, on whether anything surprised him in his NHL debut:
Not really. You expect the best. It’s the best league in the world. The L.A. Kings are a hard team to play against and I thought we played good as a team and that’s why we got the win.

Provorov, on getting through a tough first period:
They came out hard. We weathered the storm and we started playing our game and scored some goals and played with the lead.

Travis Konecny, on holding off the Kings in the first period:
They were ready. Home opener, we knew it was going to be a tough first period and we battled through and we got through it. Then we got our feet under us in the second period and things started going our way.

Konecny, on what went well for the Flyers in the second period:
After the first we talked in the room and it was just getting that first period out of the way. We knew they were going to be coming hard and we started simplifying our game. Pucks and passes started being crisp and on the tape. Like I said earlier, we were just getting pucks to the net. A lot of the goals were just getting pucks in the right areas and things were working.

Sean Couturier, on the success of his line with Konecny and Voracek:
Me, TK and Jake we’ve talked a lot and we know we can be a productive line and tonight was a great example of a lot of support and a lot of chances we got.

Couturier, on rebounded in the second period with four goals:
It was huge. They came out pretty strong. It was our first game, they played already so they were pretty pumped up. [They] came out hard, we faced the storm and then after that we started taking over. Got a nice four-goal and then after that we just closed the game out.

Michal Neuvirth, on Doughty’s goal and whether he thought it was tipped on the way in:
No, I don’t know. I haven’t seen it at all. [I] was trying to find [it] through the traffic but couldn’t find that one but [from] what I heard it was a perfect shot.

Neuvirth, on the Kings’ push-back in the third:
Obviously we didn’t want to let up any goals in the third but they scored a second goal. It looked like we were confident with the puck and we knew what we were doing the whole time. It’s the way we’ve got to play on the road.