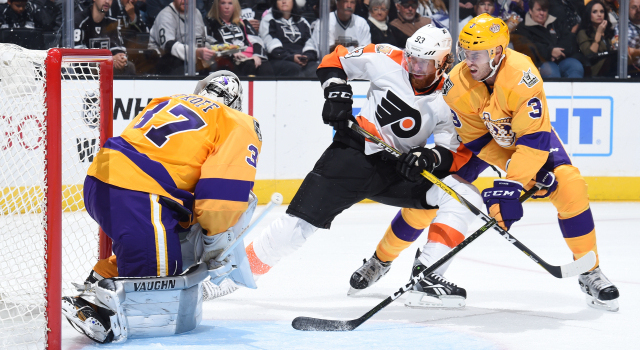 On the team’s performance:
I think both teams were sort of in a feeling-out in the first period. A pregame thing, and then I think in the second period they scored two goals on two really bad line changes by our team. Then you’re in a little bit of a different mode.

On whether it’s tough to chase the game with Tanner Pearson and Marian Gaborik out:
We get Tanner back, and we’re giving guys opportunities. Some guys didn’t get to play in the third period tonight, some guys did. That’s the way it works. Can’t say we didn’t give them the opportunity.

On whether the first two games matter, given the team’s slow start last season:
Damn rights it matters to me. But my mindset would be to go 80-2.

On Jeff Zatkoff:
I think in the first period he made two big saves at the end of the first on our penalty kill to keep it zero-zero going into the second, and I think that the first two goals they scored, as I said, they were odd-man, outnumbered. It doesn’t matter the goalie. I think he gave us a chance, and I don’t think that was an issue.