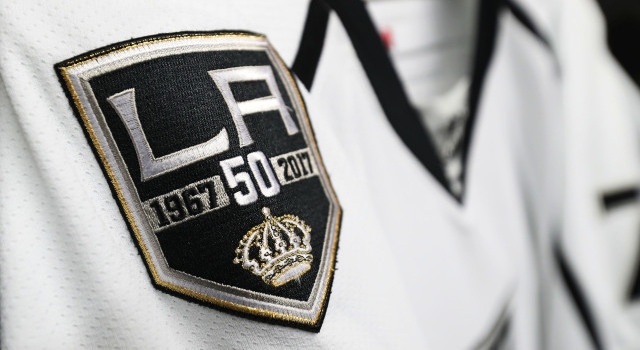 A good day to you from El Segundo, where the Kings have returned to their team areas for meetings and video sessions after a morning skate. Several notes:

-It wasn’t a full-team skate; Jeff Carter wasn’t among those on the ice. Don’t panic; as a refresher, he often takes the option in the morning. Yesterday he took part in the skate and was aligned with Teddy Purcell and Trevor Lewis, so there’s no alarm. Because it wasn’t a completely full group, line rushes are, for the most part, moot. Refer to yesterday’s rushes: King-Kopitar-Toffoli, Clifford-Brown-Shore-Nolan and Andreoff-Dowd-Setoguchi. You may notice that one line has four skaters on it; because the last skaters to leave the ice were Nic Dowd and Tom Gilbert, it’s not clear who will fill out the depth lines this evening.

-Jeff Zatkoff was the first goaltender to leave the ice and is expected to start against Philadelphia, with Peter Budaj backing him up. If you missed the Jonathan Quick update from Dean Lombardi, it’s right here.

-For those scoring at home, that’s Raffl-Giroux-Simmons, Konecny-Couturier-Voracek, Cousins-Bellemare-Weise and VandeVelde-Gordon-Read, with defensive pairings of MacDonald-Gostisbehere, Provorov-Streit and Schultz-Manning. Via Tim Panaccio, Michal Neuvirth will start in net; Radko Gudas will serve the first game of his six-game suspension for his hit on Boston rookie Austin Czarnik.

-BE. IN. YOUR. SEATS. BY. 7:00. – Kings management. It’s an important day in the history of the organization, and a special batch of dignitaries will be on hand as part of the pre-game ceremony. The ceremony isn’t scheduled to begin until 7:30, but don’t you dare tempt Picothulhu, Angry Los Angeles Traffic Deity, on a Friday. Bob Miller and Jiggs McDonald will emcee different parts of the ceremony, which Wayne Gretzky, the Triple Crowd Line and other distinguished members of the organization who’ve had their jerseys retired will be honored along with the 1967-68 club and other alums. Davis Gaines will perform the national anthem. Puck drop is scheduled for 7:56 p.m.

-The Kings are hosting a 50/50 raffle this year. From their press release: Participants will have a chance at winning 50 percent of the pot from the 50/50 Raffle with the proceeds benefiting the Kings Care Foundation. Fans can visit any 50/50 Raffle kiosk on the concourse or purchase tickets from roaming sellers from the time doors open until the end of the 2nd intermission. Tickets will be sold 3 for $5, 10 for $10, and 60 for $20. One ticket will be selected each game and announced during the third period, with the winner taking home half of the evening’s net proceeds and the remainder benefiting LA Kings charitable partners. For more information or to find out if you won, visit lakings.com/5050.

-I’m serving as an NHL Network correspondent again this year and will have a televised report on NHL Live at 2:10 p.m. Let’s talk soon, Insiders. Darryl Sutter quotes will follow shortly.