Kings look to get back in sync in transition 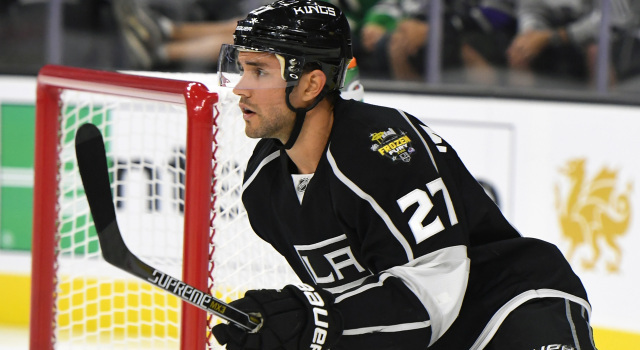 The Kings appeared out of sync advancing the puck in Wednesday’s season opener, a deficiency that led to less zone time than which the traditionally strong possession team generally operates. That, of course, raises several questions. Was it because of San Jose’s reliable forecheck? Was it because of too much space between the forwards and the defensemen? Was it simply because the five-man units weren’t working in concert together? I asked Teddy Purcell yesterday and Alec Martinez earlier today about what they saw in the San Jose game, and what can be done to move the puck more efficiently up-ice.

Teddy Purcell, on the performance against San Jose:
I think the effort was there, it’s just we weren’t very sharp, execution-wise, and we spent a lot more time in our zone than we’d like and got extended out there a lot of shifts, and when you’re playing in your zone it takes a lot out of you, and we didn’t get a lot of zone time in their end, and that was kind of the difference in the game.

Purcell, on whether the transition challenges were due to zone exits:
No, I think the D did a good job of moving their feet. A lot of it was on us forwards. They did a good job of absorbing their forecheck, and we weren’t really good at making the next play to break out clean and get possessions into their zone. Usually this team is a team that has a lot of possession, entries and stuff like that, and we just didn’t execute last night to give ourselves that chance.

Purcell, on the challenges of losing a goaltender one period into the season:
Well, it’s tough. Anytime you lose a top player, especially your goaltender, it’s not the best news, but it happens. There’s no point in hanging our heads about it. We’re confident in Zats. He came in cold last night against a very good team, and he did really well and gave us a chance to win, so we’ve just got to collectively as a group be better, and it’s a good opportunity for Zats to step up here.

Purcell, on whether the team is faced with “good adversity”:
You never like to start like that with your number one goalie going out. I think everyone would be lying if they said they were excited, but like I said, this team has always taken a lot of pride in being responsible defensively and giving up not a lot of shots, so we’ve just got to collectively as a group be better and come together for each other.

Alec Martinez, on the challenges of advancing the puck on Wednesday:
I think you could just tell that we were out of sync. Our timing was off, I think the crispness of our passes and things like that, the details were off, and when you make a bad pass, sometimes it throws off the timing of the other linemates. That creates a not very smooth transition in the neutral zone, and then that obviously translates if you’re dumping a puck and a guy’s got to step up at the blue line, he’s losing his speed and his momentum and he’s not going to be able for a 50-50 battle, so I think it was just kind of an out-of-sync type thing.

Martinez, on whether the defensemen did a good job of avoiding San Jose’s forecheck:
I thought we did a fairly decent job of breaking their forecheck. Like I said, we could’ve been a lot cleaner, and then that just obviously makes things a lot easier. But I think we’ve had a good day of practice yesterday and a good skate this morning, so I think it’s been addressed. We know what we need to get better at.

Martinez, on appreciating Friday’s pageantry while on the hunt for two points:
Obviously it’s a cool thing and a big night for the organization. It’s definitely a cool thing to be a part of, but with that said, you’ve got to treat it as another game, and it’s an opportunity for two points, and two points that we need.